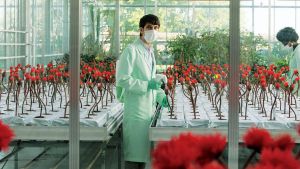 Nobody allergic to big ideas should approach the films of Jessica Hausner without a facemask and a biohazard suit. In work such as Lourdes and Amour Fou, the Austrian director has shown an enviable gift for weaving philosophical musings in with gripping narrative.

The many (to this writer) puzzling sniffs that came the way of Little Joe at Cannes last year were divided between critics who failed to find any ideas worth disputing and those who objected to one possible interpretation of the central premise. The film certainly could be an attack on the anti-depressant generation, but it is surely more valuable as a general pondering of our inability to live outside ourselves. All we have is perception. Should we care if that perception is warped or artificially flavoured?

All of which may scare some readers away from a staggeringly beautiful film that redraws Invasion of the Body Snatchers as an exercise in pistachio metaphysics.

The picture concerns the development of a genetically engineered plant – the Little Joe of the title – that will, it is hoped, soothe those nearby with its blissful odour. Alice Woodard (Emily Beecham) is the scientist most responsible for its development. Chris (Ben Whishaw), a softly spoken nerd, and Bella (Kerry Fox), an older researcher with mental health issues, are also there to coax the brightly coloured flora into existence. Our own David Wilmot is hilarious as a boss who just wants an easy life. As the pollen spreads torpor about the staff, we wonder whether a malign botanical intelligence may be at work.

All sorts of mysteries are rooted up, kicked sideways and then left to fester. What is up with Bella’s dog? What’s with the ersatz contentment that spreads through those infected by Little Joe’s soothing spores?

The film asks its questions with the assistance of stunning costumes – minty lab coats and complicated, beige shirts – that clash and complement deliciously clean production design. Martin Gschlacht’s camera pans slowly to exclude vital bits of the action. Beecham, who won best actress at Cannes, sells the unlikely story through charm and steely focus. The score by Teiji Ito is a masterpiece of clattering unease.

Many will find Little Joe a bit slow and elliptical, but it gets under your skin and lays eggs there. It will not be easily forgotten.