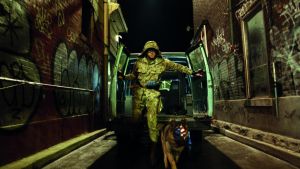 The curiously lauded adaptation of Mark Millar’s graphic comic Kick-Ass just about managed to stretch its decrepit high-concept – what if superheroes existed in something like the real world? – over a yawning two-hour void. It helped that Nicolas Cage was on hand to send himself up. Chloë Grace Moretz’s transgressions as a child vigilante offered further distractions. But the film’s post-modern pretensions ended up looking very threadbare by the close.

Kick-Ass 2 is the very model of a sequel with no place to go. The key joke has already been flogged to death. Cage’s character is no more. And Hit Girl – Ms Moretz’s foul-mouthed crime fighter – is now a troubled teenager with few school friends. What’s the point of that? Spider-Man first travelled the same road half a century ago. An adolescent Hit Girl makes about as much sense as Iron Man would without his big metal suit.

For all that, Moretz’s character still gets about as much screen time as does Kick-Ass himself, who is given a dead sort of life by Aaron Taylor Johnson.

Dave Lizewski, Kick-Ass’s alter ego, is now living quietly with his dad in the outer boroughs of New York City. Meanwhile, Mindy Macready continues to skip school and fight injustice as the profane Hit Girl. When their old acquaintance, Chris D’Amico (Christopher Mintz-Plasse, playing within his teeny, tiny comfort zone), rises as a super-villain with a rude name, new alliances must be formed. An underused Jim Carrey is among those taking up cudgels.

Jeff Wadlow, writer and director, never settles upon a suitable tone. A few satirical swipes are taken at barn-door targets such as the wretchedness of high school life. (This turns out to be the first of two Carrie retreads featuring Moretz this year.) Sometimes the film remembers to place the violence within inverted commas, but, towards the close, the open brawling is indistinguishable from that in any other superhero picture.

Nothing sums up the film’s queasy tone better than one throwaway sequence, played for laughs, in which Chris fails to achieve arousal while attempting to sexually assault Kick-Ass’s new best pal. Yes, you read that right. It’s a rape joke.

Eugh! Give me dumb-dumb rather than clever-dumb any day.