Irish brothers in arms: the soldier and the film director

When the Hitchcocks left Ireland in the 1910s they went on very different paths. One, Rex Ingram, became a Hollywood great, directing ‘The Four Horsemen of the Apocalypse’. The other, Frank Hitchcock, became a distinguished soldier and chronicler of life in the trenches 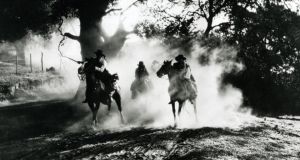 Epic achievement: The Four Horsemen of the Apocalypse, the 1921 film directed by Rex Ingram 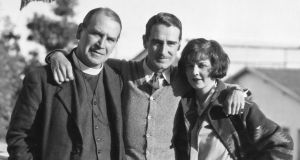 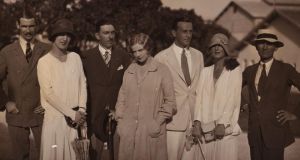 Parallel lives: Frank Hitchcock (far left) on set with others 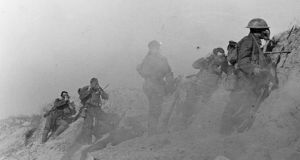 In the trenches: a gas alarm during the Battle of Loos; Frank Hitchcock won a Military Cross for a raid there. Photograph: Print Collector/Getty

On the evening of March 6th, 1921, the auditorium at the Lyric Theatre in New York was full. The newest film from Metro Studios, The Four Horsemen of the Apocalypse, was about to receive its premiere. A figure dressed as John the Baptist stepped into the spotlight and explained the film’s religious references. As he turned, the screening began.

The silent film took its viewers from the Argentinian pampas to the salons of Paris, introducing them to a beautiful young actor whom they would soon know as Rudolph Valentino. His performance of the tango was just one of the film’s show-stoppers.

In Paris a crazed Russian looked to the skies and predicted the coming of a terrible war, heralded by the four horsemen. Valentino’s Julio Desnoyers danced on, uncaring. At the end of the intermission an onscreen drummer played the haunting sounds of the military burial salute. Offstage a musician dressed as Death picked up the rhythm and slowly advanced in front of the screen. As he passed across the stage the orchestra took up the beat and the screening recommenced. When the Marseillaise broke out a soprano was heard offscreen singing the words. War had come and even Julio could no longer ignore it.

After nearly three hours the performance came to its conclusion. Applause filled the auditorium. The audience, many of them celebrity guests and critics, filed out; several stopped to congratulate the director. “Kinda young to turn out a big trick like this,” the Film Daily observed. “Modest too. His appreciation shows in his handclasp.”

As the children of a Church of Ireland rector – the redoubtable Francis Ryan Montgomery Hitchcock, Trinity classics scholar and boxing enthusiast – Rex and Frank moved from rectory to rectory before the family settled in Kinnitty, in Co Offaly. Their mother, Kathleen, died in 1908 after failing to recover from an operation. Propelled by the loss of his mother and by his inability to pass the entrance examinations to Trinity College Dublin, Rex emigrated to the United States in 1911, aged 18.

Frank was devastated by his brother’s departure. His father remarried the following August, but Frank never took to his stepmother, and shortly afterwards he escaped the difficult atmosphere at home by enrolling as a boarder at Campbell College in Belfast. Two years later he began his army career as a cadet at Royal Military Academy Sandhurst.

After a short spell of manual labour at the New Haven dockyard, Rex secured a place at Yale to study sculpture. But a chance visit to the Edison family set him on another path, and the following year he dropped out of college and joined the brazen new world of moving pictures, based at that time in New York.

The outbreak of the first World War saw one brother hustling for work in whatever capacity he could – actor, writer, stuntman – while the other was stationed as a junior officer in the Leinster Regiment at Victoria Barracks in Cork. In May 1915 Frank received orders for the front. Two weeks later the 19-year-old was at Armentières, commanding a platoon. Next up came Ypres. The dirt, the fatigue, the filthy, lice-infested men in the front line were all recorded in Hitchcock’s trench diary, which he kept in great detail throughout the war and skilfully illustrated with maps and sketches.

Rex, also keen to join, applied to train as a pilot with the Signal Corps. By now he had also taken his mother’s name and was known as Rex Ingram. This would later cause confusion thanks to the American actor of the same name. The family were also no relation to any other film director named Hitchcock.

In July 1916 Frank was ordered to rejoin the British Expeditionary Force at the Somme. “Always the guns – they never ceased firing in Picardy in 1916,” he wrote in his diary, now published as Captain FC Hitchcock’s Stand To: A Diary of the Trenches 1915-1918 (Naval & Military Press). “We had suffered all the horrors of war in the last month. Colossal shell-fire from guns of every calibre, gas-shells, machine-gun and rifle fire, hunger and maddening thirst; and we had all suffered from the CO down to the drummer-boy from lack of sleep, and from the heat of the day and the intense cold at night; also from pests – the enormous blue-black flies which plagued the Somme battlefields. How they crawled into one’s food after they had been settling on some exposed piece of human mortality lying in No-Man’s Land.”

Frank won the Military Cross for his role in a daylight raid at Loos in January 1917, and shortly afterwards he had an extended spell of home service in Ireland.

In March 1918 Rex started life as a cadet in the RFC. He wrote to his brother and asked him to get a pair of riding breeches and a pair of Fox’s puttees – leggings – from the Kinnitty tailor Joe Molloy. A photograph from the time shows him standing on the wing of a plane, his goggles perched on his forehead, his leather coat tightly belted. He smiles with a faint air of self-consciousness.

While working as an instructor to the Officers’ Cadet Battalion at Fermoy Barracks, Frank met Elisabeth Brasier, who was running a voluntary canteen for the soldiers, and a year later they were married. In Canada Rex struggled with pilot training. He was prone to dreaminess, and once up in the air the words of his instructor faded into oblivion.

“In a few seconds I had forgotten him and his advice,” he wrote in his unpublished memoirs, which are held by Trinity College Dublin. “I was in an airplane, alone, the sky above us, resplendent now with the crimson of sunset. A good omen! For some reason – later I realised it was not enough right rudder – the machine began to describe a circle. Instead of heeding instructions, I gritted my teeth and opened the throttle full. With a roar the machine and I left the ground in something approaching a flat turn and rose with the wind instead of against it.”

Ingram roared high above the aerodrome and out of sight, and, 45 minutes later, he crash-landed his Curtis Jenny, taking out another stationary plane as he hit the aerodrome. Perhaps fortunately, as he readied himself to travel to Europe, the news came through: war was over.

Frank had returned to the Western Front in August 1918 and was involved in the triumphal march into Germany. Despite poor health he soldiered on with the Leinsters in India, until the regiment was disbanded in 1922 with the coming of Irish independence. He spent several years in a sanatorium in Switzerland, and it was there that the brothers were to meet again after 15 years.

The Four Horsemen of the Apocalypse

An obstinate perfectionist, Ingram fell out with Louis B Mayer at MGM, but the studio agreed to set him up in southern France. It was here that he made another first World War epic, Mare Nostrum, written by the author of the original novel of The Four Horsemen, Vicente Blasco Ibáñez.

Rex’s marriage to Doris Pawn had ended as easily as it began; his second wife, Alice Terry, starred in Mare Nostrum. She played Freya, an Austrian spy who seduces a sea captain (played by Antonio Moreno) to win his loyalty to the enemy side. The action spanned three countries, included a magnificent set-piece submarine attack, and was visually stunning. He would continue to make films out of Nice until the arrival of the talkies, at which point he retired from film-making, converted to Islam and travelled around north Africa, gathering stories about its people.

Frank’s postwar years were more of a struggle. His marriage broke up, and it was a difficult divorce. He never fully recovered his health. He wrote numerous articles on military history and two books on equestrianism. But he was very much the old soldier – a man shaped and scarred by his extraordinary experiences as a young officer in the trenches.

Ruth Barton, who teaches film at Trinity College Dublin, is the author of Rex Ingram: Visionary Director of the Silent Screen (University Press of Kentucky). Mare Nostrum will screen at the Irish Film Institute on December 9th, with a new score performed by 3epkano. Michael James Ford is an actor and writer. His play For King and Kinnitty will be performed in 2015