Gibson’s multi-Oscar-nominated second World War film wallows in the carnage, and is ruthless with its audience. You will not be bored 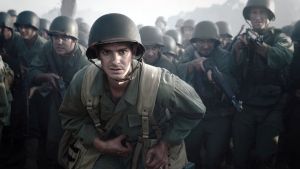 There is an awful lot of movie in Mel Gibson’s attempt to re-enter respectable Hollywood. If they gave out awards for “most movie in a movie”, then no other movie need turn up. (He’ll have to contend himself with nominations in four Oscars categories as it is.)

This is not a comment on Hacksaw Ridge’s length (though it’s long enough) or its quality (though it’s not at all bad). A director whose lack of subtlety harmonises with a fecund gift for the mechanics of the art, Gibson delivers a work that plays ruthlessly on the audience’s raw sensibilities.

The story hangs around the stirring achievements of a remarkable man. During the second World War, Desmond Doss, an army medic, became the first conscientious objector to win the Medal of Honour after saving scores of men during the battle of Okinawa. As the film tells it, the tenets of his Seventh Day Adventist Faith prohibited him from even touching a rifle during training.

Making good use of a militantly ingenuous Andrew Garfield in the central role, Gibson shoots the opening half of the film as an upmarket TV movie. Doss is a simple man who wants to do the right thing. He falls for a nice nurse (KStewalike Teresa Palmer) who never once questions his convictions. The initially hostile recruits in his company – who we know will come round in the heat of battle – are each defined by a single characteristic: aggressive, vain, gaunt.

We also know that the tone will change when they land on Okinawa, but little can prepare the viewer for the jolt of Gibson’s battle scenes. This not the messy hyper-reality of Saving Private Ryan or Come and See. The firefights play out like the more ghoulish panels from an EC horror comic. One minute we’re joshing in the parade ground, the next we’re using our comrades’ severed torsos as improvised shields. Gibson’s unmistakable enthusiasm for violence works against the high moral tone, but the deranged gusto of those sequences cannot be questioned.

Once again, as in Silence, Garfield’s character takes a puzzling, religiously motivated stand (Doss resists even training with a rifle). Unlike that more sophisticated film, Hacksaw Ridge knows to give us some broad personal motivation for his stand. That explanation is clunky. But, like most everything else in this peculiar film, it does what it’s supposed to do. You will not be bored.