Guy Maddin: ‘I wanted to cure myself of myself’

With ‘The Forbidden Room’, a sprawling tribute to lost films, the singular Canadian director has come up with his most ‘Guy Maddin-y’ film to date 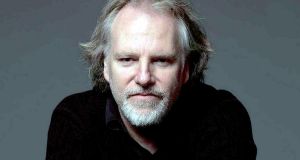 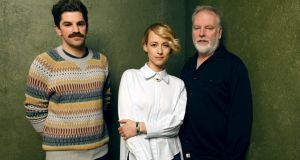 Guy Maddin is threatening to stop being Guy Maddin.

This news will worry the world’s cineaste communities. Over the past 30 years, the Canadian has emerged as one of the most defiantly odd film-makers of his generation. He has a style and he knows it. Earlier films such as The Saddest Music in the World and Cowards Bend the Knee reveal an interest in the period when film was negotiating the uneasy shift to sound. He shoots in black-and-white. He uses inter-titles. He leans towards melodrama.

The Forbidden Room, his latest sprawling experiment, showcases the Maddin approach in gigantic form. Spread over two hours, the picture comprises a collage of stories derived from real-life “lost films”. There’s a submarine picture. There’s a story concerning a tribe that worships a volcano. Elsewhere, a doctor repeatedly breaks and resets a patient’s bones. It’s vintage Maddin, but more so.

“Everything is more here,” he says. “I really wanted to get this tribute to lost films out of my self. It was an experience to get all my Guy Maddin-y concerns out in one great blob. I wanted to cure myself of myself.”

A wide, grey-haired man in his late 50s, Maddin spills out answers in an unstoppable self-annotated stream. Poked tentatively forward, he goes on to explain that he started the idea as an internet project, for which he would shoot 100 movies in 100 days. But he soon realised he needed the sort of money that only a feature project can generate. So the online experiment became the intimidating, overwhelming The Forbidden Room.

Too much is a good thing

“It is about too-muchness,” he says. “This is where it gets tricky. I want the viewers to feel washed up and panting after watching this movie as if surviving a near-drowning in a story storm. Normally you edit your films to make them as brisk as possible. You want them over at the right moment. I could have made this 70 minutes long. But then it wouldn’t have been too much. It would have been just right. And I wanted too much. Ha ha!”

I suspect that he likes making films that are about the process. The unfinished edges show through in his work. We get the sense he’s always in the middle of the next experiment.

Maddin was born in Winnipeg to a blue-collar family in 1956. He studied economics at the University of Winnipeg and, later, took a few film classes while working at odd jobs. Enamoured with Luis Buñuel and the early experimental films of David Lynch, Maddin and his pals began to develop their own retro aesthetic. By 1990, the “Guy Maddin-y concerns” were firmly in place. Set in 1919, Archangel (1990), which concerned Canada’s obscure intervention in the Russian Revolution, was made in the style of a part-talkie. The journey had begun.

So where did this obsession with that era of film history come from? It was a brief period, yet Maddin has been ploughing the furrow for a quarter of a century.

“I have thought about it a lot,” he says. “I didn’t really have an interest in that until I started making films. When I started putting films together, I realised a film-maker who is an artist should have the option of having people talk or not talk. A writer can describe everything in the room or nothing in the room. So it should be an option. The film industry had that option once. But it was a brief window.”

He is on one of his conversational rolls now.

“I remember watching my daughter drawing when she was small. She stuck a shell in one corner and then put a noodle in another corner. I realised that a film-maker should have that option.”

It is hard to imagine a director from the US managing this sort of career. Often benefiting from state funding, Maddin moved on to features that attracted passionate reviews around the world. Critics such as J Hoberman identified him as among the best directors of his generation. Something like a cult began to develop.

It is only in the last year, having taken a post at Harvard, that he left the city that continues to fire his playful, sometimes dark imagination. My Winnipeg (2007), among his most celebrated films, constitutes a sideways celebration of that unheralded locale.

“I suppose John Waters is the same about Baltimore,” he says. “It’s my own inability to make my mind up. I talked to people in audiences for that film and, unless they were from one of the world’s great capitals, they said they felt they were all from Winnipeg in a sense. There is something pathologically off with me. I am turning 60, but I feel I am where I should have been at 30. I should have moved at 19. But I wouldn’t have got a job at Harvard at 19.”

I get a real sense that Maddin has belatedly reached a turning point. He has moved from home. He recently shot a film that looks very different to the work we know him for. There’s a shift taking place.

“It a cine-essay set in contemporary times. It is shot digitally in HD colour. It has no old flavours and I shot it in Jordan. I am on my way. I have left this stuff behind me.”

And why not? He is now a figure of some distinction. In 2012, he was awarded the Order of Canada. This makes him royalty, does it not?

“I am like a knight now,” he says. “I walk around with a giant plumed hat and a sword. They won’t let me on planes with the sword, though. It’s not as if I’m the only one. They kept trying to give it to Neil Young, but he kept not turning up. Eventually they caught him in the green room and gave him his plumed hat.”

Is he now a member of the very great and extremely good?

“It helps me get a few speaking engagements. It comes in handy. It’s better than nothing.”

‘The Crying Game’: ‘They wanted me to cast a woman that was pretending to be a man’
8