Guardians of the Galaxy review: Dumb but hard to resist

Guardians of the Galaxy - trailer 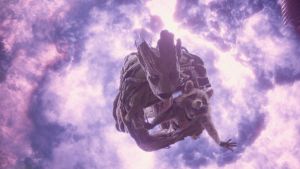 Film Title: Guardians of the Galaxy

You could smell the fear emanating from Walt Disney Pictures over the past week or so. Based on a comic-book series that first emerged in the late 1960s (you can tell, man), Guardians of the Galaxy is yet another emanation from the ubiquitous Marvel Studios.

The picture is, however, not set in the same universe as the Avengers films. No Iron Man or Black Widow turns up to reassure viewers that they need not fear too much dangerous unfamiliarity. The last time Disney launched a big-budget franchise from such untried material, it ended up with the expensive fiasco that was John Carter.

The company need not fear. True, Guardians of the Galaxy will win no prizes for the elegant structure of its plotting. Ball up a series of dumb-ass situations from Golden Age science fiction, bung them in a hat, draw randomly and arrange in sequence; you are now looking at something only marginally less mindless than the story to James Gunn’s careering film. But the characters are so charming and the banter so diverting that it proves very hard to resist.

Chris Pratt, hitherto best known from Parks and Recreation, plays Peter Quill, an earthling who, shortly after the death of his mother, gets captured by space pirates and propelled into a life of quipping, warping and fighting. In one of several amusing running jokes, Quill insists on referring to himself as “Starlord”, despite the fact that nobody else seems interested in this exercise in auto-mythology.

Somehow or other, Quill ends up in possession of a magic orb – as blue and throbbing as you might imagine – that is desired by beasts with massive heads throughout the universe. Along the way, our hero teams up with Rocket the spirited racoon (voiced by Bradley Cooper), Groot the ambulatory plant (Vin Diesel), Drax the humourless thug (Dave Bautista) and Gamora the underdeveloped green female character (Zoe Saldana).

Other well-known actors play characters whose position on the villain/hero spectrum is inadvertently obscured by a script that resists no opportunity to throw silly names at us. Glenn Close seems to be a goodie; Karen Gillan is almost certainly a baddie, and so on. One must go back to the Old Testament to find a plot so stuffed with such fantastic nonsense.

Happily, the film gets by on the posse’s jolly interactions. Just as Scooby Doo was more about larks between dog and stoner than the haunting at the funfair, Guardians of the Galaxy thrives on some very respectable joshing among plants and North American mammals. Pratt has just the right throwaway confidence for this class of suave hero, and Cooper’s vocal turn locates some poignancy in a rogue cursed to live life smaller and hairier than he’d wish.

One is tempted to wonder whether Disney jumped the gun and accidentally commissioned a Star Wars spin-off some years ahead of schedule (the Mouse House now owns that property too, of course). The characters do, after all, look as if they might have spent time in the Mos Eisley Cantina before embarking on their present mission. But Guardians actually feels more informed by an era earlier than George Lucas’s first space opera. It has the groovy swagger of Barbarella and the optimistic buzz of Fantastic Voyage. The design is hopped up with breezily outrageous backdrops (notably a mine within a disembodied head the size of a moon) and digitally generated characters that negate the administration of any recreational chemicals.

Ultimately, like those 1960s entertainments, the picture does not amount to very much. If you want genuine narrative sweep from your summer blockbuster, seek out Edge of Tomorrow or that Apes film. If you want a superior successor to Red Dwarf, Blake’s 7, Star Wars and, yes, Scooby Doo then look no further. There are worse things.