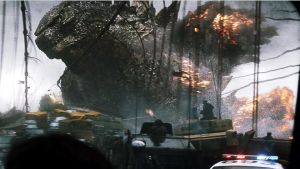 Roland Emmerich’s ghastly 1998 remake of Godzilla did the world at least one service. Now we knew it was possible for a film in which giant lizards destroy Manhattan to be more boring than an afternoon at the hammer factory.

We hardly need to say that Warner Brothers’ interesting new crack at the antique Japanese franchise is a deal more entertaining than the Emmerich film. Wave a potato on a stick at the audience for two hours and you’d manage that humble achievement. The new Godzilla is packed full of bravura sequences. It works hard at reupholstering the myths while staying true to the original spirit. Unfortunately, it’s also just a little too po-faced, a little too short on character and a little too, well, drab.

The studio has made the brave choice of hiring Gareth Edwards to direct. On the surface, the Englishman’s debut, Monsters, seemed like an audition for his new role. It was, after all, a picture about a couple trying to cope in a universe overrun by giant destructive creatures. But that film was distinguished by pushing the enormous threat into the background. It was like a Graham Greene adaption set loose in a world of post-apocalyptic mutation.

The new film is no less sombre and no less lacking in humour. When the monsters – yes, there are more than one – attack Las Vegas we anticipate a volley of satirical set-pieces. That doesn’t happen. We do see the city’s version of the Eiffel Tower being eliminated, but that mini-attack on Paris is about as hilarious as the film gets.

There’s nothing wrong with a swerve away from quips and high irony. It is often forgotten that Ishiro Honda’s Gojira, the picture that started all this, was, among other things, a dead-serious meditation on looming ecological disaster. The end result is, however, more than a little airless.

We begin at the end of the last century with an apparent meltdown at a Japanese nuclear power plant. An unrelentingly tense Bryan Cranston (first seen in a bad wig) plays an American boffin troubled by suspicions of conspiracy and institutional evasion. His wife (Juliette Binoche), also an official at the plant, is called in to deal with
the disaster, but fails to halt the spread of deadly fumes. A prologue has already alerted us to the fact that some sort of prehistoric force is loose in the Pacific. Many details will be filled in as the decades progress.

In the present, Cranston has become ever more deranged while his son, played by the blank Aaron Taylor-Johnson, has run off to become a bomb-disposal genius with the armed forces. They are soon involved in the interactions between two flying creatures and one very familiar stomping beast.

The creature design plays respectful homage to the Japanese original. We might complain that Godzilla only looked like Godzilla because a man had to occupy the scaly suit. Edwards’s film, however, makes the beast both frightening and believable while honouring his original role as class of green (in two senses of the word) avenger.

Featuring a deafening score by Alexandre Desplat and lovely, shadowy cinematography by Seamus McGarvey, the picture stages stunning sequences such as a night-time parachute assault and a tense pursuit through the Hawaiian undergrowth. But none of this quite compensates for the corny expositional dialogue – poor Ken Watanabe and Sally Hawkins speak entirely in footnotes – or the surprising lack of narrative drive.

It feels a bit mean to scowl at a film that works so hard at doing fresh things with valued material. In the end, however, good intentions are not enough to elevate the new Godzilla beyond competent adequacy.