Ben Wheatley’s latest - which pitches Murphy, Brie Larson, Armie Hammer and Jack Reynor into an hour-long gunfight - struggles under the weight of its own ambitions 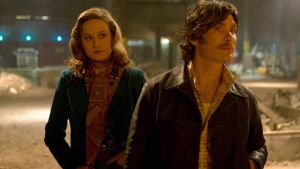 The latest from Ben Wheatley – prolific creator of such grim wonders as Kill List and A Field in England – can reasonably be referred to as an experimental film. Its experiments are not those of monochrome, gallery-based shorts featuring lengthy shots of clowns making love to sofas.

Wheatley and Amy Short, his partner and scriptwriter, wonder whether it is possible to spread an interior gunfight over a whole hour of screen time. To that end, they planned Free Fire with an elaborate Minecraft construction that helped them clarify which ledge offered cover from which staircase. The characters are broadly drawn. The camera is energetic. For all that, the picture can’t quite pull off its ambitious challenge. There’s a reason nobody has tried this before.

It hardly needs to be said that this tale of quip-heavy hoods squabbling in a warehouse is set in the go-to era for post-Tarantino mayhem. Yes, it’s the 1970s. This allows the characters to pull on mad facial hair and unrestrained lapels: Brie Larson is modestly disordered up-top; Armie Hammer gets a beard and sports jacket; Cillian Murphy wields a porn-star moustache; Jack Reynor wears a hat.

This also allows the plot to engage superficially with the Northern Irish troubles. Murphy and Wheatley-regular Michael Smiley play two IRA men in the United States to buy guns from smooth Hammer and sleazy Sharlto Copley. When the bhoys discover they’re being offered the wrong rifles, aggro leads quickly to apocalyptic havoc.

The shallowness of the characterisation is not an issue. The film-makers want only to establish clean ciphers before they are propelled towards the gunfire. It does, however, matter that none is sufficiently engaging to allow any identification. Who cares who shoots whom?

More seriously, despite that Minecraft preparation, the internal layout of the arena fast becomes unclear. Many cinemagoers will find themselves yearning for a floor plan and an app that shows where Larsons are in relation to Reynors.