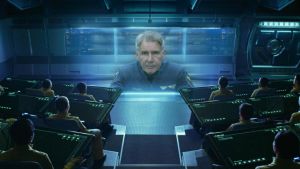 In the run-up to the release of this perfectly satisfactory space opera, much of the press attention has focused on comments concerning marriage equality made by the author of the source novel.

Put simply, Orson Scott Card is not at all on board with same-sex nuptials. Given that his book never touched on the subject, we should not be surprised that no such propaganda makes it onto screen. But well-informed viewers will wonder where Ender’s Game sits on the political spectrum.

That’s a difficult question to answer. For much of its duration, Ender’s Game plays like a significantly less satirical (that’s to say significantly more fascistic) version of Paul Verhoeven’s Starship Troopers. Some years after an attack on Earth by giant insects, the international authorities – headed up by Colonel Harrison Ford – have instituted a scheme that trains youngsters to fight the next war.

This was an ingenious piece of plotting by Card. Many authors of novels with young-adult appeal have struggled to get teenagers into the heart of grown-up conflicts, but the narrative convulsions often seem forced. Ender’s Game offers the sustainable argument that, raised on videogames, much swifter in their reactions, teenagers are the ideal candidates to propel spaceships towards spiny invaders.

Young Ender Wiggin (Asa Butterfield) looks to be the best of the coming generation. The Wiggin family offers the military a sort of Goldilocks option: his brother is that bit too violent, his sister is too pacific, but the clever, adept Ender is just right for training camp.

After laying various traps and playing various mind-games, the men in uniform send Ender into space with an assorted gang of equally young colleagues. Almost everything that happens seems to be some sort of test. He is assigned to a cadre led by a near-deranged youth who seems jealous of Ender’s close relationship with a talented female cadet (Hailee Steinfeld). Adventures in zero gravity offer further challenges. A crisis at the film’s centre propels Ender towards the attack simulation that will determine his future.

The film seems awfully excited by the martial mindset. Whereas Viola Davis’s gentler officer urges caution, the colonel’s rampaging ardour for conflict drives the first two-thirds of the picture. He approves when Ender continues to kick a bully after he’s been knocked to the floor: that shows strategic thinking, apparently. Sabres have rarely been rattled with such enthusiasm.

In the film’s closing moments, however, an entirely different atmosphere takes over. The author has devised a lovely quandary for his denouement (which we won’t detail, obviously) that Ender ultimately decides to answer in unexpectedly liberal fashion. The accusations of quasi-fascism are undermined as the film drifts towards an open ending that pleads for a sequel.

Along the way, Gavin Hood, director of Tsotsi and X-Men Origins: Wolverine, delivers some tolerably efficient intergalactic diversions. The futurology is not the most imaginative you will encounter: we could be 50, 100 or 500 years into the future. Much of the set-dressing looks very similar to the interior of your average boutique hotel. But the twisty premise behind the action sequences – we are watching a computer-generated simulation of a computer-generated simulation – adds unusual flavours to the mix and, for the most part, the young actors attack their roles with admirable vigour.

Whether the film will deliver Lionsgate Films its much-desired franchise is hard to say. Ender’s fans are not so numerous as a dip in the internet would suggest and – despite the involvement of Card as a producer – the sizable sections cut (wisely, for the most part) from the book will annoy more than a few readers. Campaigners for marriage equality do not, however, have much to fear from the film.

Shots in the Dark: A portrait of Britain as a struggling team
5

Galway International Arts Festival: Like a phoenix from the flames
6

Has Britney Spears really been judged incompetent to vote?
9