Fellini’s ‘La Strada’ - one of the greatest weepies ever made 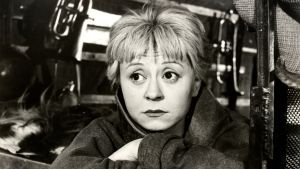 La Strada begins with a death and ends with weeping: for a film about a clown, it is awfully short on banana skins. In one of cinema’s most evocative, tragic turns, the lovely, moon-faced Giulietta Masina plays Gelsomina, a naïve young woman who, like her late sister before her, is sold to the brutish travelling performer Zampanò (Anthony Quinn) for 10,000 lira.

The deal’s broker, Gelsomina’s mother, warns Zampanò that Gelsomina “came out strange”, and sure enough, she’s an odd duck, but one that can cheer a crowd with drumrolls, buffoonery and her little trumpet. Fellow artist Zampanò performs a strongman act and breaks an iron chain with his pectorals, a strength he uses to coerce his new companion into cooking, cleaning and conjugal privileges.

After their first night together, she wakes up in tears, then wipes them away, repeatedly. Her optimism and loyalty is repeatedly met with cruelty: he orders her to wait while he rides away with another woman on his motorbike, he whips her for every transgression, he smacks her around for refusing to help him steal from a convent, and he beats her when, after she briefly escapes, she rebuffs his attentions.

He isn’t any nicer to his male colleagues. When he and Gelsomina end up working in a makeshift circus alongside Il Matto (The Fool), a playful highwire artist and clown (Richard Basehart), Zampanò responds to teasing by chasing Il Matto with a knife. Their rivalry does not end well. Gelsomina brays like a donkey and quacks like a duck during her comedy routines.

“I even teach dogs,” says Zampanò, when he first acquires her. Trapped in a loveless, pre-feminist marriage with a walking study in toxic masculinity, being livestock is all that she can aspire to, and, in the end, not even that.

Made in 1954, just as the golden age of Italian neorealism was petering out and some years before the term Felliniesque came to symbolise busy, fabulous absurdity, La Strada’s simple allegorical poetry has been variously interpreted as Christian allegory, pre-feminist tragedy and Freudian tripartite turmoil.

It holds its own, more than six decades on. If Giulietta Masina and Anthony Quinn’s tragic two-step doesn’t break your heart, then Nino Rota’s score will.

Has Britney Spears really been judged incompetent to vote?
9

‘Dunkirk’ is full of inaccuracies. And then there are omissions
10