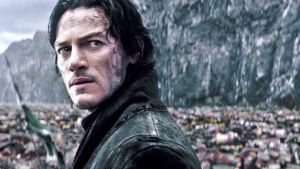 One has to be a little suspicious when a generously budgeted picture is trimmed down to a breathless 92 minutes. Not that one would necessarily wish Dracula Untold to be any longer.

It can, surely, never have been the film-makers’ intention to deliver this tolerable sword’n’ savagery adventure in pocket form. Whole characters have gone missing. Subplots have withered into garbled asides. The final coda pointing towards a sequel would seem more convincing if the preceding hour and a half didn’t convey such a startling lack of faith.

Conspicuously in debt to the opening sections of Francis Ford Coppola’s Dracula, Gary Shore’s film seeks to investigate the man Dracula was before he became immortal and blood hungry. In that regard, the picture bears comparison with Batman Begins or Man of Steel. The difference is that, unlike Bruce Wane or Kal-El in those epics, Vlad the Impaler (Luke Evans) never really gets to become the character we cherish.

Following a few hideous outrages by the invading Turks, Vlad heads to a cave where he meets a malevolent entity in the beguiling form of Charles Dance. (The character was once meant to be a version of Caligula, but that strand has been lost in the pruning.) A deal is struck: Vlad will gain enormous powers for three days, but, to avoid being cursed to eternal life, he must resist the concomitant desire to drink blood during that period.

For all that, Dracula Untold feels like a rushed, half-hearted attempt to do something that wasn’t really worth doing in the first place. It doesn’t try to be a Dracula film. It’s not a proper historical epic.

Mind you, it may work for Game of Thrones addicts as a sort of cinematic methadone until the proper heroin returns next year. Can we even call that faint praise?