Dheepan director Jacques Audiard: ‘I wanted to do a remake of Straw Dogs’ 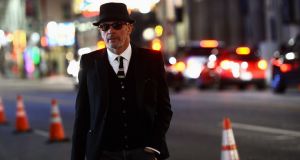 Jacques Audiard: “I had the idea to do Dheepan four years ago and history has caught up with it” Photograph: Michael Buckner/Getty Images for AFI 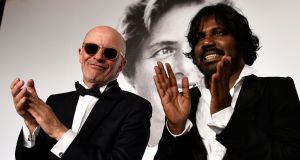 Feature films take a long time to put together. It is, thus, rare that a picture looks to have ripped its subject from the headlines.

Jacques Audiard’s Dheepan is one such. The movie concerns tensions between recent Asian immigrants (Sri Lankan Tamils) and their new neighbours in the working-class suburbs of Paris.

Though it is mostly taken up with domestic tribulations, Dheepan eventually erupts into spasms of explosive violence. When, just four months after the Charlie Hebdo attacks, the film won the Palme d’Or at Cannes, it already felt like an urgent commentary on national discontents.

I meet Audiard in the last weeks of November. Paris is still juddering after an even more serious terrorist attack. How was it to be in the city?

“Oh, very good. Formidable!” Audiard says with the blankest sarcasm. “I had the idea to do the film four years ago and history has caught up with it. It’s odd. I wouldn’t even think about doing it now. But I am glad that it’s already done – that it’s there. If I did it now I would not, perhaps, tackle the subject head on. Maybe I would not deal with it at all.”

Why the Tamil community? Was there a conscious decision not to engage with Islam? “I wanted to do a remake of Straw Dogs,” he says.

That almost makes sense. Dheepan’s connections with Sam Peckinpah’s 1971 film, about an American academic taunted by Cornish hicks, poke through after only cursory excavation.

Audiard deports himself like the meritocratic mikado of French cinema that he has become. Immaculately dressed in contrasting tweeds and expensive shoes, he dominates the room without raising his voice above a conversational burble.

It has been an interesting career. Though his second film, A Self- Made Hero, won a prize at Cannes in 1996, Audiard did not become a star of world film until the new century. The Beat My Heart Skipped received raves in 2005. A Prophet, winner of the Grand Prix at Cannes in 2009, was among that year’s most acclaimed films. You could be forgiven for guessing he was in his mid-40s. In fact, now 63 and son of busy director Michel Audiard, Jacques has been writing movies over 40 years.

Why did it take him so long to direct?

“I never felt I had the vocation,” he says. “It was an accident I got into it. I was developing scripts with three friends. It got to the point where it wasn’t working and we decided one person had to make films.

“One of my friends had made a film and was in debt. Another didn’t want to. So, it just fell to me. I owe everything to my friends. They had more confidence in me than I had in myself.”

Arthouse hits
In more pluralist times, Audiard’s films would have broken through to a mass audience. He has still managed to cross over from the Anglophone arthouse to a greater degree than most of his compatriots. Both Read My Lips and The Beat That My Heart Skipped were suave thrillers centred on charismatic actors. A Prophet, his prison epic starring Tahar Rahim, has developed a fanatical cult following. These are not eccentric “personal films”.

“I couldn’t imagine just making films for myself, family and my cat and my dog,” he laughs. “Cinema is a means by which you communicate with people. I have to have spectators. Otherwise there would be no point. I often quote the French critic Serge Daney. He said a film must have two entrances: one big one for the mass audience and a smaller one for the cinephiles.”

Hollywood has tempted more eccentric directors. Audiard makes the sort of films studios love to ruin by translating to LA. (Come to think if it, The Beat That My Heart Skipped is a variation on James Toback’s 1978 Fingers.) We can assume that he’s been offered to travel for Return of the This or Attack of the Other.

Protected in France
“Yes. I am very attracted by American actors, but I am not attracted by the American production system. If that were to happen, I imagine it would be very difficult for me. I am very, very free in France. It’s a very protected system.”

Yet it sounds as if he might now be cosying up to the monster. Asked to speculate about his next project, he starts musing about the possibility of addressing the most American of all genres.

“I am thinking of filming a western in the US. It is difficult for me to imagine it, but it would be easier to do a western there than in, say, Romania. Ha ha!”

It might be a good time to step away from the home country. Dheepan’s victory at Cannes counts as inarguable recognition from the domestic establishment. He is now among the greats.

Mind you, the award was among the biggest shocks in recent Cannes history. Dheepan wasn’t thought to have a chance against Todd Haynes’s Carol or László Nemes’s Son of Saul.

“The very fact that the Coen brothers were presidents of the jury worried me because I admire them so much,” he says. “I really didn’t expect it. I honestly don’t go there for the prizes. I go there because you have a very respectful audience. When you do win the Palme d’Or, you think of all the great film-makers who have come before. It’s as if you’re in the same photograph with them. I never expected it.”

I think Dheepan was about 8/1 with the bookies.

“Oh, I would have made money. No, I wouldn’t even have bet on myself.”