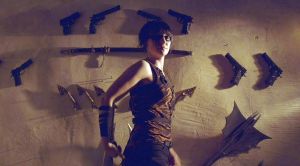 Black hoods are doffed to Zoe Kavanagh for pulling off an enjoyable, unashamedly genre-hugging horror flick within the not-always hospitable environs of the Irish film business. Others have passed this way before. Many have not lived to tell the tale.

Demon Hunter is a proud late follower of the Buffy Tendency. We begin with the spirited Taryn (Niamh Hogan) scrapping heroically with somebody (or something) that clearly wishes ill to the world. You don’t expect fight direction of this high class in a low-budget flick. Clearly some cheating has gone on, but the choreography has real fluency and real crunch. It ends with the antagonist’s decapitation.

The cops are soon on Taryn’s tail and, as they poke among the evidence, flashbacks talk us through the origins of our heroine’s supernatural vigilantism. Sometime earlier, her younger sister was killed after Taryn allowed the girl to walk home alone. At the graveside she is approached by a sinister henchman who speaks pure horrorese. “Mr Falstaff bid me give you this,” he says. Never mind the “bid me”. What about Mr Falstaff? You don’t get too many devilish masterminds named after characters from Henry IV.

Kavanagh’s picture is rough around the edges and dogged by occasional bouts of indifferent acting. Few viewers not already in tune with the aesthetics of contemporary grindhouse will find it easy to get on board. But Demon Hunter knows exactly what it wants to be and it becomes that thing with impressive confidence. Kavanagh has thought hard about her world building and her new mythologies. Hogan throws herself at the part with an enthusiasm that speaks encouragingly of her work ethic. Fair City’s Dave Duffy, a commendable regular of low-budget Irish cinema, is on hand to give the project his imprimatur.

There is enough good stuff here to suggest that Kavanagh has a real future in her chosen genre. Demon Hunter is unlikely to win over the Merchant Ivory crowd, but it could well spawn a multitude of sequels. That seems to be the intent.