The endless ironic nods and winks do little to soften the squalor and misogyny of this latest contribution to the sweary, 16-cert po-mo superhero genre 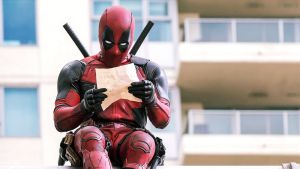 Note to self - must do better: Ryan Reynolds in Deadpool

Already the beneficiary of some bafflingly positive reviews, this squalid, misogynistic entertainment speaks of a chronic insecurity in the superhero universe. Constantly apologising for its own idiocy – the credits describe the director as “some douchebag” and the male lead as “God’s Perfect Idiot” – Deadpool plays like a dim 15-year-old’s impression of what a grown-up superhero film might look like.

The protagonist still dresses in a leotard, but he says rude words and he gets to see actual bosoms. You don’t get that in Thor. You do, however, encounter such things in the dire Kick Ass and the worse Kingsman. Far from being any sort of innovation, the sweary, 16-cert po-mo action film now constitutes it own horrible genre.

To press home its supposed sophistication, Deadpool dares to touch on terminal illness. Ryan Reynolds plays Wade Wilson, an army veteran who now spends too much time picking fights in a seedy bar. Following a grim cancer diagnosis, he is edged towards a sinister organisation that has the power to cure him and grant him the usual superpowers.

Unfortunately the treatment also makes him movie- ugly (that’s to say severely sunburnt) and sends him just a little off his rocker. Before too long, he’s quarrelling on the overpass while dressed as a Mexican wrestler. He is Deadpool.

Just as the James Bond films parodied themselves before the likes of Get Smart and Our Man Flint got in on the act, the Marvel series has never kept its own tongue far from its cheek. Deadpool’s quips are more profane and self-conscious than Iron Man’s, but both heroes use humour as a way of distracting from accumulating preposterousness.

The tone here is of the barroom boor who prefaces every unforgivable insult with “no offense, but…” Does the description of Morena Baccarin, who plays Wilson’s girlfriend, in the credits as “some hot chick” excuse the utter feebleness of her role? Perhaps that acknowledgement casts an ironic filter over the casual sexism and outright misogyny that appears elsewhere in the film.

In one of his endless downstage asides, Deadpool suggests to an imagined female audience member – presumed to be swooning at the gore like a Victorian aunt – that a “boyfriend” must have “dragged her” to the movie. No offense, but girls don’t much like Marvel movies. Hey, babe, come back. Have you no sense of humour?

Directed by Tim Miller, formerly a visual-effects artist, the film does employ a satisfying crunch and squelch in its promiscuous action sequences. The framing duel on a motorway combines the mayhem of Mad Max with the comic bloodletting of Monty Python’s Black Knight to anarchic effect.

Reynolds recovers from the embarrassment that was The Green Lantern (inevitable subject of yet another self-deprecating gag here) with a wink-heavy turn that mixes hemlock in with his familiar smooth charm.

The film, however, ultimately sags beneath the weight of its promiscuous frankness. If you keep telling us the product is cheap, exploitative, unreconstructed rubbish you risk us taking your words at face value. No offence, Deadpool, but you suck.