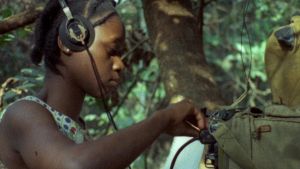 This chilling, austere essay on the work of Frantz Fanon, early pioneer of post-colonial studies, begins with a bracing introduction from academic Gayatri Chakravorty Spivak. The Indian thinker explains how, on its publication in 1961, Fanon’s The Wretched of the Earth was banned in France and caused even potential fellow traveller Jean-Paul Sartre to swallow nervously. Spivak tells us that, far from urging or revelling in violence, Fanon’s text argues that violence is an inevitable consequence of colonialism.

That interpretation seems sustainable for most of the film. Lauren Hill speaks lumps of Fanon’s text over archival footage. We see Swedish missionaries failing to grasp the ironies of their uncharitable arrogance. We listen to a racist Rhodesian farmer discuss the inevitable end of that country’s white hegemony. In one extraordinary shot, a maimed mother feeds her maimed baby. The message is stark and clear: colonialism degrades the colonised and makes a monster of coloniser.

These points are hard to dispute. but they emerge from an argument that was won decades ago.

The discussion takes a more sinister turn. Moving on from representing violence as a consequence of injustice, the quotes really do, as Sartre suggested, seem to celebrate violence as a purifying energy in itself. If this misrepresents the text, then the film-makers must accept some blame.

There are extraordinary images on display here. But it’s difficult to understand why this film has emerged now. The Wretched of the Earth may have been banned 50 years ago, but anti-colonial studies are now something of an academic industry. I imagine a few employed in that industry might scowl a little at Olsson’s decision to subtitle some perfectly lucid English from African contributors.

I’m allowed to say that, surely.

A Very British History: ‘I heard chants supporting the IRA. My blood boiled’
9

Berthe Morisot: the woman in vanguard of Impressionism
Real news has value SUBSCRIBE