Can The Revenant’s effects bear the weight of history?

One of the key characters in the Oscar-baiting film is a very angry ursine – but when its CGI starts to look patchy, will the film’s reputation survive? 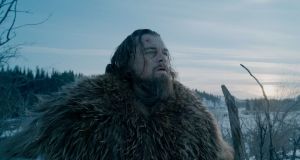 The Revenant: A grimy and compelling series of events that were necessary for Leonardo DiCaprio to finally win an Oscar

Early on in Alejandro González Iñárritu’s snowbound, spittle-flecked survival slog The Revenant, fur-trapper Hugh Glass (Leonardo DiCaprio) meets a grizzly bear. Said bear decides to safeguard her cubs by smashing the small-faced, squinting dreamboat all about the head and body, and the ferocity and horror of the resulting sequence – along with lurid, false rumours about what precisely takes place within it – has made it the most talked-about scene of the year.

In keeping with the tone and pacing of the wider film, Iñárritu takes his time with the attack. We get to see our hero brutally maimed in three separate onslaughts during a seemingly continuous two-minute shot; body parts gripped, dragged and thrown by her snarling maw; his head, fingers, back and legs savaged by stiletto claws on giant paws, smashing and swiping like big, hairy bin lids.

At one point, as Glass plays dead, our ursine agitator props a giant paw atop his head, like a 1950s football captain posing with a bloodied, dribbling match ball. It’s a truly heart-stopping scene, all the more impressive for its languorous direction: we see the frenetic contact of her claws on skin and bone, the moisture on nose and muzzle, the powerful muscles moving beneath every fibre of her damp and matted shag-pile fur.

And yet, of course, there was no bear. Instead, over the course of a two-day shoot, our hairy antagonist was played by Canadian stuntman Glenn Ennis, his 6 foot 4 inch, 18-stone frame crammed into tight-fitting Lycra and topped with a smooth, blue plastic bear head. The entire sequence was then reconstituted in CGI to create its incredible effect, but it remains to be seen whether this astonishing performance is built to last.

We’ve grown used to being wowed by visual effects, only to revisit them some years later and find that their new car smell has somewhat dissipated. Many flash films become significantly less watchable as the visual effect set-pieces at their centre sag and wither, particularly when they feature detailed creature effects and, especially, human figures.

That last pursuit, attempting to adequately represent human appearance and movement through CGI, falls foul of the dreaded “uncanny valley”: that sense of creepy disquiet you feel when you encounter figures that appear very nearly human but not quite. For years, this problem has been a major frustration to animators, effects artists and, I’m told, the brave souls making the expensive sex robots of the future.

Unfortunately, the more accurately someone synthesizes the human form, the more your brain – highly trained to spot minuscule flaws in faces and movement – reacts to such efforts with revulsion. In other words, the uncanny valley is that queasy feeling you get each time Tom Hanks turns his melted waxwork face towards you in The Polar Express.

When shown footage of oncoming trains, early filmgoers famously fled theatres in terror. Likewise, 1990s audiences were surprised and delighted by a cartoonish hole in Goldie Hawn’s stomach or the admittedly hilarious notion of eight Michael Keatons. But as a given effect proliferates, our eyes become trained and less susceptible to its use. This is most pronounced with human subjects, but is also common with animals, landscapes and that final Michael Keaton that’s one too many.

This is why the marvellous beasts and vistas of Avatar seemed like a new frontier of film-making when that film was first released, but now feel about as hi-tech as typing numbers into your calculator and spinning it round to spell rude words.

Can a scene remain timeless and classic when CGI has, time and time again, proven to have a shorter shelf life? Even now, on a second or third watch of The Revenant, there are elements of the bear that don’t quite stand up; a lazy eye here, a plastic lip there. There’s even that generalised, unreal sheen to proceedings that somehow robs them of their weight.

Genre also plays its part. Avatar is a fantasy, Death Becomes Her a black comedy, and Multiplicity presumably some form of tax avoidance by a struggling production company. But The Revenant is a historical prestige picture, which means lots of grave mumbling, dirty faces, and no parts for women, because they weren’t allowed outside until 1990. A great big misfiring effect shot at its centre could make the whole thing look really weird. In other words, we don’t really mind if the dinosaurs in Jurassic Park look a bit rubbery nearly 25 years later, but it might be slightly distracting if Lincoln featured a fully computer generated John Wilkes Booth.

If Iñárritu’s movie is to stand the test of time, it will be on the grit of its performances and stunning cinematography. Perhaps its over-reliance on a momentarily impressive CGI money shot will be forgiven, as people remember the movie for what it is: a grimy and compelling series of events that were necessary for Leonardo DiCaprio to finally win an Oscar. On the bright side, with issues of diversity as prominent as ever in Hollywood, perhaps this film will finally kick off a resurgence in substantial roles for female bears. So long as they’re played by giant Canadian men. We can only hope.