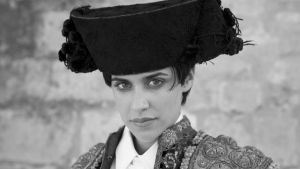 You don’t have to work too hard to accommodate this stunning Spanish silent movie within current vogues. A loose revision of Snow White (the clues are in the title), Blancanieves is, after Snow White and the Huntsman and Mirror Mirror, the third such interpretation to touch down here in the last year and a half. The film also finds itself riding the wave of interest in silent cinema kicked up by the popular and critical success of The Artist two years ago.

These connections are coincidental. Long in development, Pablo Berger’s film tackles its sources in considerably more oblique fashion than did either of the American Snow White movies. Blancanieves is, if anything, even more dedicated to honouring the conventions of silent cinema – not a single word is heard – than was the justifiably lauded The Artist. It is, maybe, a little too long. It is certainly enslaved by its high concept. But Blancanieves has a tangy intensity that easily compensates for any archness.

The story concerns Antonio Villalta (Daniel Giménez Cacho), a celebrated matador, who, in short time, is visited by a typhoon of catastrophes. After freezing in the ring, he is wounded and then loses his traumatised wife in childbirth. His daughter, Carmen, grows up with her grandmother until the old woman dies. Elsewhere Antonio decides – all good fairytales requiring an evil stepmother – to marry solipsistic Encarna (Maribel Verdú), his former nurse, who then proceeds to treat him and the family like woodlice.

You will know what happens when Carmen comes to stay. Now a sort of Cinderella (or a young Cosette from Les Misérables), she is dispatched to the barn and treated as a class of indentured servant.

Anybody who’s read a book over the last 2,000 years will recognise the meditations on motherhood: an evil step-parent carries all the malign, disciplinarian impulses, while a conveniently dead birth mother remains an idealised saint. But Berger brings a very Iberian class of colourful eroticism to the updated mythology. Shiny boots are worn. Whips are brandished. Carmen makes a connection with her father by learning the (abundantly phallic) art of bullfighting.

Eventually, Encarna flies dangerously off the leash and begins plotting to eliminate her husband and banish her troublesome step- daughter. Left for dead, Carmen happens upon a troupe of travelling dwarfs named Los Enanitos Toreros. Impressed by her beauty, they name her Blancanieves. Eventually, in a perfect, savage circle, we end up back in the bullring.

The story buzzes with propulsive energy. Every scene carries some new threat or some fresh prospect of emotional turmoil. Yet Berger still finds time to tinker with his twin experiments in mythology and on the grammar of cinema.

Latter-day silent films – think Mel Brooks’s Silent Movie and the work of Guy Madden as well as The Artist – are generally torn between self- conscious trickery and a sincere desire to replicate the beats and harmonies of an archaic form. Blancanieves tends more towards the latter approach.

It would be stretching it to say the film could be mistaken for a beautifully restored film from 1927 (the post-Angela Carter psychosexual musings squash that notion), but you de feel that FW Murnau or GW Pabst would have got their head around the project without too much stretching.

It hardly needs to be said that this fairytale is not really intended for children. In truth, few fairytales are.