An Irish film, a Scottish film and a Welsh film go into a bar...

Moon Dogs review: This Irish-Scottish-Welsh film with a strong cast and plenty of silly costumes 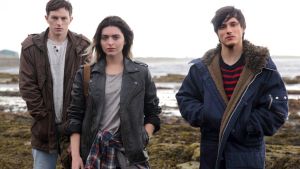 So, an Irish film, a Scottish film and a Welsh film go into a bar . . . What is this? Some kind of joke?

In a way. This amiable road movie – co-produced by Creative Scotland, Ffilm Cymru and the Irish Film Board – is happy to risk overdosing on cask-strength Celtic quirk.

Nobody is ever far away from a silly costume or an unlikely musical instrument. At times you yearn for the thing to suffocate on its own knitwear (argyle, Arran or whatever the Welsh equivalent is).

But it’s just about charming enough to deflect such fury. Imagine Y Tu Mamá También with more longeurs and less unpleasantly sticky weather. And Your Ma Too!

Michael (Jack Parry Jones) and Thor (Christy O’Donnell), step-brothers who have yet to come fully to terms, live breezily with their parents in a remote part of Scotland. Thor, who speaks with the local accent, has notions of becoming an experimental musician.

Michael, who sounds Welsh, has just screwed up his exams and is upset about his girlfriend going to Glasgow University. Both find reason to make for that city. Along the way, after stopping off to play at a wedding, they pick up an Irish singer named Caitlín (the talented Tara Lee from A Date for Mad Mary).

By golly, they are lucky to have that cast. Derek Boyle and Raymond Friel – who wrote the transcendentally wretched The Calcium Kid over a decade ago – have not produced a screenplay with any great structure. We meander from one thing to the next before that one thing has had time to make any sense. We could do without the forced zaniness of Thor’s dad trying to interest his son in Viking re-enactment.