Allison Janney: ‘I would get cast as 40-year-old women when I was still in my teens’

Janney, who didn’t find success as an actor until she was in her late 30s, thinks things are looking up for women – even very tall women – in Hollywood 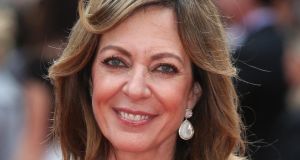 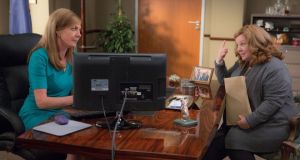 Janney and Melissa McCarthy in Spy

There is a story from Hollywood’s golden age that tells us that Lana Turner, upon visiting her tailor, looked over at a dress dummy for the Irish-born Greer Garson and sniffed: “She’s a very tall woman.”

Was Turner being euphemistic? Perhaps not. It’s not easy being tall in Hollywood. Just ask Allison Janney.

“It was really hard for me to get cast in anything for a long time,” she says. “I would get cast as 40-year-old women when I was still in my teens. There just wasn’t a lot of work out there for people of my height.”

No wonder she is giddy talking about Spy, a new espionage caper from Bridesmaids director Paul Feig that brings together Janney (1.83m) and Miranda Hart (1.85m) as handlers for unlikely CIA operative Melissa McCarthy (1.6m).

“I’ve known and admired Melissa forever,” says Janney. “And we hit it off immediately with Miranda, who is just glorious. We really want to work together again. We’re going to have to find or write a play for tall women.”

Spy boasts a plot that is at least as good as the last two Bond films, with plenty of Pink Panther-worthy bumbling. Even better, Janney gets to boss Jason Statham around.

“I only knew him as the consummate screen tough guy,” she says. “But it turns out he’s charming and funny and loves to be silly. He’s just delightful. And it was just a playful shoot. I think I made up a new swear word.”

Standing up for herself

In truth, we’re not too surprised to see The Stath cowering and sulking at Janney’s every command. As CJ in The West Wing, she was quite capable of slapping down her own president (“That’s fine. Just don’t show off”), while her steely stand-off with the ultrasound technician in Juno is perhaps that film’s finest moment.

She has, indeed, recently taken home an Emmy – her sixth – for her work on Mom, the Chuck Lorre-produced multi-camera sitcom concerning a mother (Janney) and daughter (Anna Faris) who are both recovering addicts.

“Mom is the best day job I ever had,” she says. “It’s two weeks on, one week off, which is very civilised after the 17-hour days on The West Wing. Glorious even. So I’ve been able to do HBO’s Masters of Sex , which I loved doing also, alongside Mom.

“I’m so grateful to have stumbled into such a great show at this point in my career. It manages to take very serious topics like addiction and make them funny. Because in the end, isn’t that how people get through things?”

Art in the blood

“My parents are very artistic, even though neither of them pursued it as a career path,” says Janney (55). “My father worked in commercial real estate. He still plays piano every day and draws. My mom did her stint in theatre and was happy to settle down and be a mother. But she’s still on the board of practically every theatre in Ohio. She houses artists who come to perform there. She’s very participatory in her community.

“They’re very proud and happy that it turned out all right for me . . . ” She laughs. “Eventually.”

Janney wanted to act. To that end she studied drama at Ohio’s Kenyon College, where her tutors included Paul Newman and Joanne Woodward. “They just let me do what I wanted to do,” she says. “They made suggestions here and there. But they never said, ‘Don’t do that any more.’ ”

After graduation, Janney relocated to New York. Success did not come quickly.

“I was 38 or 39 before I started to make any kind of a living at this,” she says. “I was scooping ice-cream and that sort of thing. Something would always come along. But many times I thought I was going to quit.”

She worked up an impressive series of supporting credits during the 1990s (Primary Colours, American Beauty, Celebrity, 10 Things I Hate About You), but her career only truly blossomed during the new millennium.

“I didn’t have success early on,” she says. “It would have been nice for my parents if it had happened a little bit earlier, so they wouldn’t have to worry about me. But it did mean I was established by the time my career took off. I knew what I was doing.”

Janney suggests that people in the acting business rely “a lot on luck”. But at least parts for women – particularly tall women – have got a little better.

“There’s still work to be done,” she says. “But I like to think it’s getting better in terms of writing and roles. There’s still a ridiculous discrepancy in pay. That can’t continue.”

She and Mom co-star Anna Faris have talked about guest-directing an episode of the sitcom. But Janney, who has proved well capable of barking orders on screen, is not so sure she could manage the same in real life.

“I think I’d make a lousy director,” she laughs. “I don’t think I have the right brain for it. I just moved into a new house, and we were redecorating and I had all these workmen asking me different questions. And I just melted under that pressure.

“I thought, Oh my God. How do directors do this all day?”

LATE BLOOMERS: 5 GREATS WHO CAUGHT UP

Brendan Gleeson: The former Dublin secondary school teacher was 34 before he decided to pursue acting full-time. He went on to work with Mel Gibson, Steven Spielberg and Martin Scorsese, and occasionally prods our nation’s conscience from the guest seat on The Late Late Show.

Jane Lynch: The Glee star was 43 when she got her big break as a lesbian dog-handler in Christopher Guest’s Best in Show (2000).

Gene Hackman: Hackman had served in the US Marine Corps and worked many jobs around New York City when, in 1956, he joined California’s Pasadena Playhouse. While there, he and fellow classmate Dustin Hoffman were voted “Least Likely to Succeed” by their rather foolish peers.

Alan Rickman: Rickman ran a graphic design company for many years before he decided to try his hand at acting. He won a Tony in 1985 for his portrayal of the Vicomte de Valmont in Les Liaisons Dangereuses. His 1988 turn as villainous Hans Gruber in Die Hard ensured he was known by practically everyone on planet Earth. And that was before Severus Snape.

Ian McKellen: Sir Ian had long been known among fans of West End theatre. But he was in his 60s when the Lord of the Rings and X-Men franchises turned him into a global brand.

Are we all Kantians now? The Covid-19 effect on moral philosophy
7 Family deals with its loss as serial killer still roams free
8