Silent Moves opens audience’s eyes to the challenges faced by people with disabilities, from feeling invisible in shops to the lack of open conversations about love, sex, autonomy and adventure 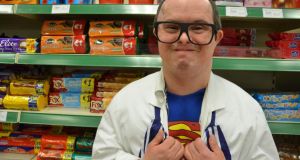 Bernard McDonnell as Hugo the Bashful in Silent Moves 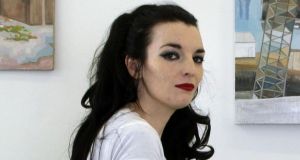 Aideen Barry: ‘They wouldn’t always have been able to verbalise what they wanted to say, so the idea of silent movie is perfect, to show some of the things they are up against.’ Photograph: Joe O’Shaughnessy

The problem is that naming can marginalise, but until you create a focus, it’s hard to bring groups into the mainstream. That mainstream, in the art world as in so many other worlds, was created and owned by white men. Today, the tag “women’s art” seems almost old-fashioned, and while there is still a vocal community arguing for the distinction, it is generally accepted that art arising from the experiences and viewpoints of 50 per cent of humanity should be seen as “art”, rather than having a room of its own.

So what about disability arts? Here the arguments are a little different, as the barriers to making, creating and participation in the art world can be harder to overcome. Although a number of organisations are involved in helping people with disabilities to enjoy, and express themselves and their lives through the arts, the outcomes are often ghettoised in terms of exhibition and reception.

Ignite is a series of major commissions for artists and performers with disabilities in Galway, Mayo and Cork. Galway’s project, Trickster, featuring UK artist and musician Jez Colborne and groups from Mind the Gap and That’s Life – and supported by the Arts Council, Arts and Disability Ireland and the relevant city and county councils – showed in the Black Box theatre in October. Simon McKeown’s work, which partners with the National Sculpture Factory, Cope and Create, will happen in Cork in 2015.

And this week, Aideen Barry’s half-hour film Silent Moves, made with artists and actors from Scannan Technology and the Ridgepool Training Centre, will premiere at the Ballina Arts Centre in Mayo.

The work is inspired by the silent films of Buster Keaton and Charlie Chaplin, and Barry is keen to point out that it’s not her story. “It’s the kind of project I couldn’t ethically have control of,” she says. “I couldn’t be lead artist; I had to be a collaborator.”

The 26 artists she worked with have various forms of learning disabilities, and Barry brought in choreographer Emma O’Kane to work on movement and physical expression. “They wouldn’t always have been able to verbalise what they wanted to say,” says Barry, “so the idea of silent movie is perfect, to show some of the things they are up against every day of their lives.”

These challenges include feeling invisible in shops, the frustrations of inconsiderate parking, the lack of space to have conversations about love and sex, and the very ordinary desires for romance, autonomy, adventure.

“The world is silent for all of us,” says Barry. “We process each of our everyday experiences, our heartbreaks, our joys ultimately on our own, in our own silent world, in our minds.”

The film’s heroine, Daisy Bright, is played by Karen McDonell. “It is a very important story. It’s funny, but there is a serious message in it as well,” she says. McDonell’s Daisy is kidnapped by the scheming Vincent D’Villain (Micheal Durkan), before being rescued by her faithful swain, Hugo the Bashful (Bernard McDonnell), with help from a crew including Michelle Loftus’s rather brilliant Granny.

McDonnell says working with Barry is lovely. “I have done some acting on stage before but this was a new experience in front of the camera. [Barry] explained everything really well. She always wants to know what the actors think and always listens to our ideas.”

The results of their work are seen via the bright colours and witty stop-motion filming that fans of Barry’s work with be familiar with, most recently via the Changing Tracks project, which placed marvellous art works on the Westport to Achill Greenway (changingtracks.eu).

Here, she helps a group of artists and actors to show and tell the world from their own perspectives, in a way that should enrich the understanding of everyone who sees it, whatever their abilities. Crucially, it’s never preachy, or, as Barry puts it, “it says it without bashing people over the head”.

As she says this, I’m reminded of two pieces of art that also changed my perspectives on the world in small but powerful ways. Alison Lapper Pregnant, Marc Quinn’s sculpture for London’s fourth plinth commission in Trafalgar Square in 2007, showed Lapper, who was born with shortened legs and no arms, as a serene Madonna figure, challenging the increasingly artificial and narrow ideals of beauty that society subjects us to.

As psychologist Trudy Dehue has written, “by declaring all manner of behaviour that deviates from a norm a disorder, a large machine continues to create ever-increasing numbers of patients and – by means of compulsory voluntary self-regulation – evermore perfect people.” We are all the poorer for it.

The other work was Artur Zmijewski’s Singing Lesson 2, seen at Lismore Castle Arts, also in 2007. A documentary-style film, it showed young deaf children being taught to sing. It could have been voyeuristic and exploitative; instead, the pure elation on the faces of the singers at the end of the concert made me think again about where the norms of what art and music seem to be set; and crucially what they can do for and to us when you set them free. It’s a conversation that everyone should join in with.

Silent Moves shows at the Ballina Arts Centre during the last week of November. See ballinaartscentre.com for times and tickets. irelandignite.ie