A Million Ways to Die in the West

A Million Ways to Die in the West - trailer 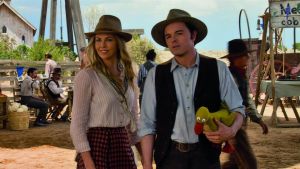 Film Title: A Million Ways to Die in the West

1882. Arizona. When cowardly sheep farmer Albert Stark (Seth MacFarlane) runs away from a gun duel, he loses face and drives Louise, his gold-digging school marm fiancee (Amanda Seyfried), into the arms of the foppish owner of the local moustache emporium (Neil Patrick Harris).

Heartbroken, Albert retreats into drinking and obsessing about death with his gormless chum Edward (Giovanni Ribisi) – until the mysterious Anna (Charlize Theron) arrives in town. Anna quickly schools Albert in rootin’, tootin’ and shootin’ so that he might win Louise back.

However, unbeknownst to our hapless hero, Anna’s husband Clinch (Liam Neeson) is the meanest outlaw in the west, and he’s heading their way.

Oh dear. Saddles do not quite blaze in Seth MacFarlane’s comedy western. A ramshackle collection of early Family Guy cutaway gags and poo sightings can’t compensate for the underdeveloped, underwritten screenplay. The central titular premise is half-remembered, then promptly forgotten.

How can the creator of Family Guy and American Dad have got it so wrong? Unhappily, the primary problem is MacFarlane himself, who, we soon learn, should stick to voicing errant bears and stoner dogs. Structurally, Albert is a crooked keystone and too nice by half. MacFarlane’s best-loved creations – Peter, Stan, Ted – are jerks. They speak without filters or self-awareness or any trace of empathy. Albert is merely a whiny neurotic: he’s all filters and self-awareness.

To be fair, all the starry folks on screen appear to be having a whale of a time. And, in common with a lesser episode of Family Guy, A Million Ways to Die in the West passes the time in a way that’s fun, but never exactly funny.

If you love The Cleveland Show, then this is the movie for you. Maybe.

Do you download illegally? Are you morally okay with that?
7

As the world transforms, so too must its poetry, disregarding tradition
8