Donald Clarke in conversation with Killian Scott, one of the stars of '71, the thriller by Yann Demange set in Belfast in 1971. 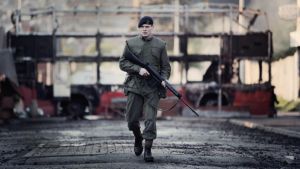 There exists a photograph of your reviewer – all purple flares and pudding-bowl hair – standing merrily beneath a huge wooden “71” positioned near the Botanic Gardens in south Belfast. For reasons that should be apparent, the optimistic Ulster 71 Expo, conceived to celebrate 50 years of the Northern Irish statelet, failed miserably to define the era.

There is certainly no mention of it in Yann Demange’s breakneck thriller set two miles west of the giant digits. This is a heightened version of the bloodied-parka Belfast we soaked up throughout decades of miserable news reports.

Film-makers have rarely dared to use the Troubles as a backdrop to any sort of mainstream entertainment. You cannot, after all, move through those waters without picking up inconvenient political residue in every exposed crevice. Demange’s film engages with more than a few controversies. There are references to collusion between loyalist paramilitaries and the security forces. Elsewhere, we get an uncomfortable reminder of the Jean McConville murder. But, for the most part, ‘71 plays like a raw pursuit thriller. There’s something of Cornel Wilde’s The Naked Prey or Mel Gibson’s Apocalypto about it (even if comparisons between 1970s west Belfast and brutal tribal regions seem a little overstretched).

The movie could be set in a dozen warzones, but, having settled on Belfast, the film-makers revel in the artificial fibres, shaggy hair, and nicotine-yellow ceilings of a particular place at a particular time. The fact that ‘71 was shot largely in Yorkshire makes the achievement all the more remarkable.

The unstoppable Jack O’Connell – soon to appear in Angelina Jolie’s Unbroken – stars as Gary, a soldier from Derbyshire dispatched to Belfast as the situation is slipping into near-anarchy. The commanding officer’s opening briefing is among the film’s weaker moments. Constructed for an international audience, Gregory Burke’s script needed to explain the basic dynamics of the conflict, but the dialogue is patronisingly simplistic and the reference to the Protestant and Catholic “communities” feels a wee bit anachronistic. (That euphemistic sidestep did not become mandatory for another decade.)

At any rate, Gary and his comrades soon find themselves caught up in a chaotic street battle. He becomes separated from his squad and, as night falls, must face up to the challenge of making his way home through occupied territory. West Belfast being not quite so huge as the forests traversed in Apocalypto, Burke and Demange have to invent a few complications to impede his progress. He has a drink in a sinister loyalist pub. Compromised republicans seek his blood. Richard Dormer turns up as an ordinary man striving to do the decent thing.

Comparisons have been made with Carol Reed’s Odd Man Out, but ‘71 has none of that film’s sombre noir poetry. Shot in drab pea-soup green and endless cheap-leatherette brown, the film is suffocated by the tribal politics and zero-sum philosophies of those wretched times.

Yet ‘71 is never less than exhilarating. Demange, a Frenchman, who came to us through television, keeps his camera mobile without quite succumbing to the full, attention deficit restoring shuffle. O’Connell offers a perfect impersonation of a man who, though passing among working-class streets very like his own, feels himself stranded on a hostile planet.

It is, ultimately, reassuring to note that the worst years of the Northern Irish disturbances now seem sufficiently distant to allow their incorporation into a politically neutral entertainment. American cinema began treating the Vietnam conflict in this fashion within a few years of the fall of Saigon. We’ve got longer memories in this part of the world. Heck, just look at the first sentence of this review.

A visceral jolt to be savoured.

‘Aging, comfortable and stuck’: what happens culture when society gets old?
8