Ahead of the release of Brando’s acclaimed ‘posthumous autobiography’ Listen to Me Marlon, we take a look at some lesser-known moments of genius from the star’s life 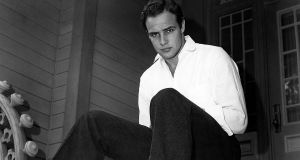 In the mood: Actor Marlon Brando poses for a portrait circa 1953. (Photo by Michael Ochs Archives/Getty Images)

Marlon Brando spent hundreds of hours over the course of his life recording himself and his own musings. From these recordings, director Stevan Riley has pieced together the documentary Listen to me Marlon, which tells the story of Brando’s life, using only Brando’s own voice.

It’s an intimate documentary, giving you an insight into Brando beyond the characters he played that we all know so well. However, he’s still a man of a certain amount of mystery. Here are ten of our favourite lesser known facts we’ve learned about Marlon Brando.

Brando doesn’t cluck like a chicken
Once during an acting class, when students were asked to act out “a chicken hearing an air-raid siren”, most students began clucking and flapping around. Not Brando. He stood completely still and stared at the ceiling - “I’m a chicken, I don’t know what an air-raid siren is,” he said.

He used cue-cards
Brando was a two-time Academy Award winner and eight-time nominee, but he never once learned his lines. He spoke five languages – English, French, Spanish, Italian and Japanese – but he wouldn’t memorise his lines, forcing other actors to wear body-affixed cue cards, or placing them otherwise in his line of sight. Once on the set of The Godfather, he was asked why. “Because I can read them that way,” he said. That was that.

About those Oscars
He declined to accept his second Oscar win, for Best Actor in The Godfather in 1972, in protest of the depiction of Native Americans by Hollywood. However, two years before this, he applied to the Academy to have the Oscar he’d won in 1954 for Best Actor in On the Waterfront replaced. It had been stolen, though up until that point, he had only been using it as a doorstop.

He almost didn’t get the part of Don Corleone
Stanley Jaffe, president of the studio making The Godfather, said Brando would never be in the movie. He eventually agreed to allow him the part if he agreed to three conditions: Brando would be paid less than his usual salary, he would take financial responsibility for any delays he caused, and the kicker – Brando would have to consent to a screen test, his first since 1953.

He was the Mighty Moon King
James Caan and Robert Duvall, on the set of The Godfather, began mooning Brando while he was filming. Not one to be upstaged, Brando dropped his trouusers and mooned them and almost 500 extras during the wedding photo scene. Afterwards, Caan and Duvall presented him with a belt that read “Mighty Moon King”.

Brando taught acting in drag
Brando’s acting skills were so legendary that people like Robin Williams, Michael Jackson, Whoopi Goldberg and Sean Penn showed up to his acting classes to learn from the legend himself. At one of the classes in 2001, the 78-year-old appeared in drag with a single rose in one hand, before launching into a 10 minute monologue which ended in him mooning the class.

The 10-class run was called ‘Lying for a Living’ and he had actors do improvisation exercises with homeless people and policemen he dragged in from the street. He also reportedly once had students strip naked in front of the rest of the class. “Was he serious about the class? As serious as a heart attack,” said Edward James Olmos, one of Brando’s students.

Brando loved practical jokes
If the mooning wasn’t enough, Brando apparently owned a fake bagel that had a plastic cockroach in it. He would offer it to guests at his home, where he also had a fart machine that he hid in chair cushions and controlled via a remote. He is said to have brought the fart machine on to sets to distract other actors as well. When Johnny Depp asked him why he loved farts so much, he replied: “Because they are blatently anti-social.”

He liked to shoot scripts
Sean Penn told Charles Bukowski that Brando liked to put the scripts that producers sent to him in his freezer. When he felt like it, he’d take them out of the freezer, have them tossed in the air into the canyon below his home at night, before shooting them to pieces with a shotgun. No ordinary clay pigeons for Brando.

He owned an island, and a racoon
Tetiaroa, an atoll in French Polynesia, was a getaway for Tahitian royalty before Brando bought it in 1967. He paid $270,000 for it, and since his death, it has become an eco-conscious luxury resort called The Brando. He also had a pet raccoon, who was a hit at his parties. In his own memoir, Brando wrote: “I decided to buy a chimp, but before I did, my mother gave me Russell, the young raccoon. My mother had a great imagination that went along with her marvelous sense of humor... He was a sleep wrecker, so I didn’t let him get in bed with me often. We would chase each other around the apartment and play fight and tickle, which he loved.”

He saw himself as something of a con-man
In Listen to me Marlon, he tells us: “If I hadn’t had the good luck to be an actor, I don’t know what I would have been. I probably would have been a con man. A good con man tells… lies, gives impressions of things he thinks, or appears to think, that he doesn’t think.”

- Listen to Me Marlon is out November 30th on limited release. Read the review here