Donald Clarke: Free us from myth of US Irish slavery

Every time news arises concerning the antebellum African-American experience, the same halfwits emerge to argue the Irish had it a great deal worse 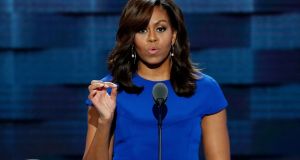 Michelle Obama’s comments about raising two black children “in a house that was built by slaves” caused outrage in the Barry Goldwater Home for the Permanently Annoyed. Photograph: AP Photo/J. Scott Applewhite

Imagine that, last Monday, the Democratic National Convention in Philadelphia became a giant comic book. The frame would have been filled with thought bubbles all saying the same thing: “God, I wish Michelle was the candidate.”

Sadly, not everybody in the United States was impressed with Mrs Obama’s address. Whereas the hall reacted warmly to her comments about raising two black children “in a house that was built by slaves”, there were blown tops in the Barry Goldwater Home for the Permanently Annoyed.

Conservatives pretended to question the hard facts, not the emotional truth. Others were involved with the construction, it was pointed out. What about the poor Scottish and Irish? Of course, Mrs Obama did not suggest – and surely does not believe – that black slaves alone built the White House, but logic means nothing when you’re refuting a supposed enemy of the state.

The White House Historical Association tells us: “The slaves joined a workforce that included local white laborers and artisans from Maryland and Virginia, as well as immigrants from Ireland, Scotland, and other European nations.” So that’s clear. Michelle told the truth. We can all go home.

Not yet. It is worth pondering the contribution of the Irish diaspora to the kickback. We’re not just talking about Bill O’Reilly here, but any opportunity to sigh at that tub-thumping blowhard should be enthusiastically embraced.

“Slaves that worked there were well fed and had decent lodgings provided by the government,” he said. This was, in other words, the jollier class of slavery. Mrs Obama need feel no more equivocal about her time in the White House than those presidents of Scots- Irish descent. Why are you making vomiting noises?

O’Reilly was teasing at the corner of the facts. More pernicious is the unstoppable peddling of myths concerning “Irish slavery”. Every time news arises concerning the antebellum African-American experience, the same halfwits emerge to argue the Irish had it a great deal worse. They were out in force last week.

The admirable Liam Hogan, a research librarian at the Limerick City Library, has been tireless in his dismantling of this poisonous legend. In the wake of Mrs Obama’s speech, he gathered together some of the choicest quotes on social media. “White House mostly built by white Irish slaves,” one remarked. “Little known fact. Most slaves in America were white Irish,” another yelled. And so on.

In recent decades, we have become more careful how we use the word “slave”. Last year there was a minor kerfuffle when, while promoting the so-so movie Suffragette, Carey Mulligan and Meryl Streep appeared in T-shirts bearing the legend: “I’d rather be a rebel than a slave.” Not everybody was happy when Prince compared an unhappy relationship with Sony to being “a slave”. Let us be clear. Most who peddle the Irish slavery myth are not using the word in similarly analogous fashion. The suggestion is that the Irish were literally enslaved and that they were treated worse than African slaves.

Delusions debunked Over five huge online posts, Hogan has debunked many of the most common delusions. Individual reports of hideous abuse to servants – sometimes not even Irish – are offered as proof of habitual enormities. Migration figures are distorted to lunatic effect. Those sorts of things.

The most common and slippery argument concerns a conflation of indentured servitude with chattel slavery. Hogan quotes Donald Harman Akenson, author of If the Irish Ran the World: Montserrat, 1630-1730, on the subject: “White indentured servitude was so very different from black slavery as to be from another galaxy of human experience.”

So, why do so many Irish people (and more Irish-Americans) want to believe this gibberish? The subject arose in the aftermath of Gerry Adams’s unfortunate use of the n-word earlier this year and, to certain of his followers, anybody disputing the legend proved themselves a famine denier or part of the “indentured servant lobby”. To be fair, there was, in this case, an attempt to identify with the African-American experience.

More commonly we see racists using the myth to belittle the suffering visited on black slaves and to siphon some sympathy towards their own clan. A hasty visit to Twitter generates face-palming results. “you ever hear of my culture the proud irish complain,” Edward asks us (I think) before mentioning the “100,000 Irish slaves”.

“Nobody talks about the Irish slaves because they don’t piss & moan about it,” Amy, a Trump supporter, bellows.

“The diff btwn Irish and Blk slaves? Irish din’t piss and moan about it for 200+ yrs,” Son of Beraigh says.

Can you people not see the irony? You do nothing but complain. It would be funny if it weren’t so depressing.