Culture Night: It’s serendipity to just go with the flow

Hugh Linehan: A great chance for venues to get people in who have never been before

The public gets a rare glimpse inside the famous Windmill Lane Studios - where the likes of Lady Gaga, Hozier, The Rolling Stones, David Bowie and U2 have recorded - on Culture Night in Dublin. 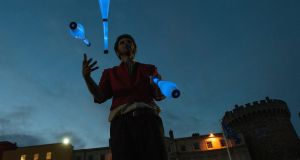 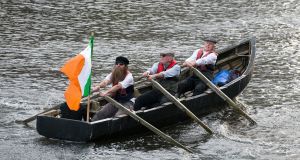 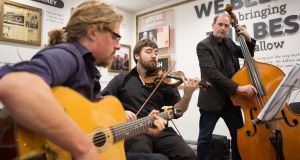 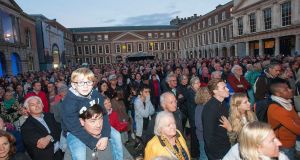 Crowds gather in the courtyard at Dublin Castle for a concert on Culture Night in Dublin. Photograph: Dave Meehan/The Irish Times

At five o’clock sharp this evening, a gaggle of children start beating on an enormous drum in the middle of Smithfield to signal that Culture Night 2016 has begun.

The drum’s name is Fuinneamh, and its owners, Bounce and her partner Mel, built it in a back garden in Crumlin. “Bounce came up with the idea,” says Mel. “It’s 90 per cent recycled material. The skin is a boat sail.”

I’m encouraged to take two sticks and have a go, and yes, there is something very therapeutic about beating the living daylights out of a drum the size of a small swimming pool. “It fits in the back of a Ford escort van,” says Mel proudly.

They’ll have to stop making this racket at 8pm, as Smithfield is a residential area.

Elsewhere, things are getting set up for the longer haul, and, despite the bus strike, there seem to be plenty of people milling about.

Kieran drove in from Glasnevin and parked on Parnell Square. He and his friends are in the GPO, posting their free An Post “Culture Night” postcards to their parents. “We’ll just wander around, and get something to eat along the way,” he says. “That’s the way we usually do it.” 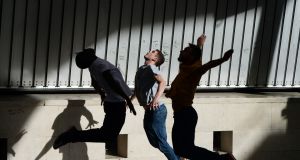 That, by the look of it, is the way a lot of people do it.

The streets around the south city centre, in particular, are full of people unhurriedly shuffling along with their little booklets telling them what’s on and where.

Some of the worst amateur dancing ever seen by humanity took place in Meeting House Square (sometimes enthusiasm is just not enough), but across the Ha’Penny Bridge, in the intimate surroundings of the Winding Stair bookshop, poet Siobhan Campbell is reading some lovely poems about cows.

Six feet outside the door, traffic-choked Aston Quay was a snarl of engine noise and fumes but inside an oasis of civilisation - and organisers the Open University had even laid on wine.

One of Culture Night’s most popular attractions every year is the Freemasons’ Hall on Molesworth Street, where the queue snakes around the corner on to Kildare Street all night. Ann is one of the hundreds patiently waiting.

Why does she think the hall is so popular? “Because it’s a secret,” she said. “A friend told us about it last year, but we got here too late. So this year we were planning to get here for five o’clock. But we got the Luas up from Heuston Station and stopped at the GPO and then we got into the 1916 exhibition . . .”

Just going with the flow

Ann said she’s going to plan better next year, but serendipity is one of the pleasures of Culture Night - there are so many events on in so many places that there’s something to be said for just going with the flow.

In the entrance hall of the National Gallery’s Millennium Wing, dancer Jazmin Chiodi is performing part of a work curated by video artist Andrew Duggan, which will be projected later on the gallery’s exterior.

“This is our tenth Culture Night, said the gallery’s visitor experience manager, Sile Boylan, who reckoned the night is a great opportunity to get people into the building who have never been there before. “We’ll end up with about two and a half thousand people passing through this evening.”

As the evening wore on, Culture Night co-ordinator Aimee van Wylick sounded relieved and increasingly confident that attendances held up.

“We’re doing a call-round to Dublin and the regions,” she said. “The reports are all looking very good. Smithfield is packed. We’ve had about 2,000 people there. Dublin Castle is now at capacity. The Freemason’s and The Book of Kells are on a par with last year. We’re really happy.”