When Ideas Matter: Speeches for an Ethical Republic review: a president’s philosophy

Michael D Higgins’s uses his gift for words to powerful effect, exploring lessons from the past 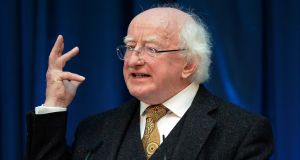 President Michael D Higgins: his unified vision provides perspective on a vast array of topics, with a recurrent emphasis on “the role that memory plays in imagination and renewal”. Photograph: Eric Luke / The Irish Times

Book Title:
When Ideas Matter: Speeches for an Ethical Republic

Isaiah Berlin once drew on an ancient Greek aphorism to distinguish between two casts of thought. “The fox knows many things,” so that aphorism goes, “but the hedgehog knows one big thing.”

For Berlin this captures the difference between the thinker who moves from one topic to another, treating each as a fresh puzzle to resolve, and the thinker whose insights on any subject reflect a common, generative source.

These speeches by President Michael D Higgins show that he clearly belongs on the hedgehog side. He draws on a unified vision, forged over many years, in order to provide perspective on a vast array of topics and to give us the insight that it supports. He does this with boundless energy, moreover, and with all the contagious enthusiasm of a natural teacher. It’s hard to resist the flow, and impossible not to take pleasure in the ebullience of the narrative.

The one big thing that President Higgins knows is not a doctrinaire truth of the kind that Berlin might have associated with hedgehog minds; Berlin prided himself, after all, on being a fox. It consists, rather, in a dense nexus of ideas and themes that he puts to use as occasion requires to illuminate the topic he is addressing. It uncoils as needed, like the red carpet that must have graced the presentation of many of these speeches.

At the core of the nexus is the importance of memory. Not the casual memory that may come to us unbidden, and depart with the next distraction. Rather the memory that we consciously construct together, albeit in honest recognition of the complexity of the past. This is a memory that we should craft and recraft, he suggests, seeking a shared image of where we have come from and where we should be going.

The duty to construct such a public memory, on this picture, is something we owe both to the past and to the future. We owe it to those who have gone before us not to let them or their experiences lapse into oblivion. In words he cites from the French philosopher, Paul Ricoeur, “To be forgotten is to die twice.”

But we also owe it to ourselves and to those who follow us to seek a future that improves on past failure, builds on past success, and keeps faith with past experience. Noting that “hunger has a deep resonance with the Irish people”, for example, he supports a commitment to overseas aid. Recalling the horror with which “the flood of Famine migrants” was greeted in Britain and America, he argues for reflection on how we view today’s refugees.

In addressing the past President Higgins is an honest voice, ever ready to acknowledge the conflicting traditions to which we are heir. While he joins in celebration of the 1916 proclamation of the Irish republic, for example, he insists at the same time on remembering the battle of the Somme and “the blood sacrifice of the 36th Ulster Division”. And, while he recalls the achievements of the leaders of 1916 and later, he also keeps in mind those nationalists like Tom Kettle who fought in the first World War in order to further Home Rule.

The complexity of the past raises a particular challenge for anyone who has to speak, not only in his own name, but in the presumptive name of the country he represents. But even at the cost of dulling the lesson, or taking the gloss off the message, he is willing to “make peace with our complex identities” and to document “the ugly reality of experience”. Thus, in speaking of those nationalists who fought in the first World War, he acknowledges that we cannot “repair the grief, or undo the disrespect that was sometimes shown to those who fought in that war or their families”.

How to go forward in light of a history like this? There is a poignant tone, and a loss of the usual ebullience, when he responds that “we honour them”; we respect their ideals; “we offer our sorrow” for the lack of compassion and understanding they were shown in Ireland.

“The suffering visited upon our own people at home,” he suggests, “had perhaps blinded our sight and hardened hearts.” It is rare and refreshing to hear a public figure admit to a failure when no admission was demanded, and to offer an explanation when no explanation can exculpate.

Creating a future The range of topics covered in this selection is extensive. The presentations are gathered under six main headings, dealing in turn with the famine and migration; the role of culture; foreign policy; democracy and rights; issues of economics; and remembering the past.

In each area, we find a recurrent emphasis on “the role that memory plays in imagination and renewal” and a repeated insistence, in words quoted from Derek Mahon, that it is, “Time to create a future from the past.”

As appears in many of the speeches, the aim in this exercise is to enable hope. “It’s not chauvinism but hope which will be necessary in the challenging years before us. Hope in our rich heritage, in our plural culture; hope in our capacity for imagination and creativity; in the common humanity generated from the complex history of our people in every corner of Ireland.”

In laying emphasis on the duty of hope, he cites a remark from Seamus Heaney: “Even if the hopes you started out with are dashed, hope has to be maintained.” The idea here is not to cultivate a bland optimism but to maintain a resolution that suspends dithering and doubt, and gives high aspiration a chance of success.

It is only if I resolve that I can and will achieve a goal – it is only if I let that hope silence any intimations of failure – that I will be able to muster my energy in its pursuit. And it is only if we can hope together for collective goals that we can give ourselves the chance to realise them. We must be able to “hope together for a better and more secure world”, he urges us. Else we will find ourselves divided and disempowered, and unable to do anything for “the most vulnerable people on our fragile planet”.

President Higgins came to office late in 2011 at the beginning, as he puts it, of “a decade of centenaries”. As these speeches show, no one in his position could have put those centenaries to better use. “Words are a great gift,” he says in the introduction, and he uses his own gift for words to powerful effect, exploring the lessons to be garnered from reflection on the past that those anniversaries mark.

There are topics his office as President must have prohibited him from addressing, of course, such as Ireland’s corporate tax policy or its treatment at the hands of the European Central Bank. But, while we may regret his silence on such issues, we can only rejoice in the energy and light that he brings to the questions that do fall within his remit.