What a character: writers in fiction

With the Dublin Writers Festival kicking off this week, here are 10 great books with writers as their subject 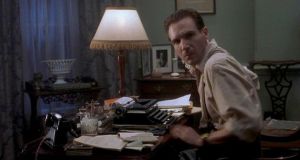 The End of the Affair: With plenty of reflection on the novel-writing process and insights into the obsessive mind of the writer, Maurice Bendrix (played in Neil Jordan’s film adapatation by Ralph Fiennes) is an intriguing antihero, loosely based on Graham Greene himself 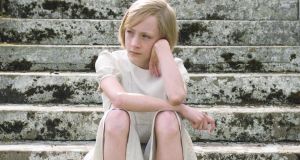 Atonement: The truths and untruths of storytelling lie at the heart of Ian McEwan’s clever novel. The involvement of writer Briony (played here by Saoirse Ronan) in the lives of her older sister Cecelia and lover Robbie has disastrous consequences. Photograph: Alex Bailey. 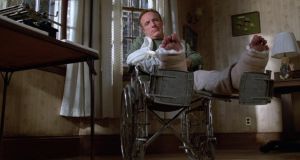 Misery: The writing process has been a recurring subject in Stephen King’s work, but his 1985 novel is arguably his best recreation of the life of a writer, Paul Sheldon (played here by James Caan) the process of writing fiction, and the very literal dangers of disappointing a loyal readership.

Set in London, Greene’s novel follows writer Maurice Bendrix in the closing months of the second World War as his tempestuous affair with Sarah Miles comes to an end. A sour and egocentric narrator, Bendrix is used to having control over his characters and allows his jealousy of Sarah’s husband to destroy the love affair. With plenty of reflection on the novel-writing process and insights into the obsessive mind of the writer, Bendrix is an intriguing antihero, loosely based on Greene himself. The character of Sarah is drawn from Greene’s real-life mistress at the time, Catherine Walston, to whom the book is dedicated.

Framed by a third-person narrative looking at the life of the writer Anna Wulf, Lessing’s novel weaves together four fictional notebooks in order to create a final definitive version that becomes The Golden Notebook of the title. Each of the four colour-coded notebooks explores different aspects of Anna’s life. Black covers the writer’s time in Southern Rhodesia, red for her experiences as a member of the Communist Party, yellow for her ongoing love affair, and blue for the notes in her personal journal. An example of what has been termed Lessing’s “inner space fiction”, the novel is concerned with the mental breakdown of individuals and the fragmentation of society as a whole.

Considered “the surest demonstration of his own genius” by the critic Harold Bloom, Nabokov’s Pale Fire is presented as a 999-line epic poem written by the venerated fictional poet John Shade. Accompanying this poem are a foreword and lengthy commentary by a neighbour and academic colleague of the poet, Charles Kinbote. These two metanarratives form the basis of the book, with both authors as central characters. As unreliable narrators go, Kinbote spins yarns with the best of them and as the reader unpacks Nabokov’s famously difficult text, his devotion to Shade and Shade’s work becomes suspect. Concerning itself with the process of creation, Pale Fire is a poioumenon(a type of metafiction in which the story is about the process of creation) with an unusual structure that allows itself to be read both linearly or multicursally, jumping between the poem and comments.

Concerning the midlife crisis of a Jewish man in 1960s America, Bellow’s novel is composed of a series of letters from its twice-divorced writer protagonist Moses Herzog. With his career floundering and his second marriage to the serpentine Madeleine finishing in humiliating circumstances, Moses tries to bring order to the chaos in his life by constantly scribbling or mentally composing letters that he never sends. The would-be recipients include friends, family members, famous people and the dead. Disappointment is a key theme, with Moses keen to discuss his own failings and the failings of others. His love of ideas and pursuit of knowledge is often at the expense of living his life in the moment, a sentiment echoed by Bellow: “People don’t realise how much they are in the grip of ideas. We live among ideas much more than we live in nature.”

The World According to Garp, John Irving (1978)

A book that all writers should read, Irving’s fourth novel is an excellent portrayal of a writer and the writing process. Decades before the first successful birth by in vitro fertilisation, nurse Jenny Fields impregnates herself by various manipulations of a dying patient and then raises her son, TS Garp, on her own while teaching at an all-boys school in New England. As Garp grows up to be a writer – alongside his mother who becomes a bestselling feminist author – themes of sex, death and gender identity become perennials in his work. From his routine at the typewriter to his use of telephone directories to name his characters, Garp’s habits and career resemble that of his creator. Garp’s third novel,The World According to Bensenhaver, is a bestseller, though Irving through Garp ridicules the idea that either book is autobiographical.

The writing process has been a recurring subject in Stephen King’s work, both in his fiction and non-fiction, with the excellent On Writing in the latter division of10 cited as a favourite manual on the craft. The Shining and its recent sequel Doctor Sleep both have writer protagonists, but King’s 1985 novel Misery is arguably his best recreation of the life of a writer, the process of writing fiction, and the very literal dangers of disappointing a loyal readership. Victorian romance writer Paul Sheldon has killed off one of his best-loved characters, Misery Chastain. When Sheldon finds himself imprisoned by a crazed fan after a debilitating accident, he is forced to write a new book that brings his heroine back to life. Nurse Annie Wilkes, immortalised by Kathy Bates in the 1990 film adaptation, isn’t willing to settle for any deus ex machina nonsense and Sheldon soon finds himself writing for his life.

The precocious teenage protagonist of McEwan’s novel shows a talent for writing and storytelling from a young age. Along with scripting a play for her younger cousins to star in, Briony Tallis positions herself as narrator and informer on her family’s country estate during a freak heatwave in the summer before the outbreak of the second World War. The truths and untruths of storytelling lie at the heart of McEwan’s clever novel and Briony’s involvement in the lives of her older sister Cecelia and lover Robbie have disastrous consequences. Throughout the book and its revelations, writing is what sustains the narrator: “Six decades later she would describe how at the age of thirteen she had written her way through a whole history of literature, beginning with stories derived from the European tradition of folk tales, through drama with simple moral intent, to arrive at an impartial psychological realism which she had discovered for herself one special morning during a heatwave in 1935.”

Canadian author Shields’s final novel is narrated by writer Reta Winters and examines the role of women in society and literature. Reta’s youngest daughter Norah has left home and taken to the streets, refusing to engage with her family. Norah sits on a street corner in silent protest with a sign marked “goodness” stuck to her chest, her mother unable to figure out what has caused the extreme change in her daughter. Highlighting that the lives of women are often ignored or considered trivial, particularly the work of female writers in the predominantly male circles of literary criticism, Unless also looks at the role of writing in a society as a whole. In one of several angry and unposted letters that Reta writes to a journalist, she complains how female writers are denigrated as “the miniaturists of fiction”, a phrase knowingly employed by Jane Austen centuries before.

Tóibín’s fifth novel takes a real-life writer as its subject, depicting the world of American author Henry James in the final years of the 19th century. Dictating his life as a writer to a stenographer, a portrait is drawn of the artist as a lonely genius, a figure that both desires and abhors isolation. Themes of sexual repression, inwardness and control are explored in the book, which won the Impac prize for Tóibín and was also shortlisted for the Man Booker Prize. Homing in on four years of James’s life, The Master begins with the humiliating failure of his play Guy Domville in 1895.

All Names Have Been Changed, Claire Kilroy (2009)

The great writer Patrick Glynn is the focus of Claire Kilroy’s third novel, a man whose talent and reputation attracts students to a writing course in Trinity College. Among these is Declan, an introverted and frustrated emerging writer whose hero Glynn soon falls off his pedestal, helped along by copious amounts of alcohol in 1980s Dublin. Irritable, lecherous and entirely uninterested in teaching, Glynn is adored by his small group of mature students, who often turn against each other in a bid to impress. Chapter titles – Amongst Women, The Butchered Boy, The Importance of Being Earnest – give the nod to other Irish writers, with quotations from literature and song used to break up the text.