Three Loves, One Death review: Freedom as a terrifying burden

The Slovenian writer Evald Flisar plays with light and dark, the fantastical and the believable 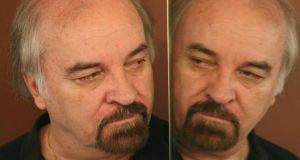 Evald Flisar: hovers on the realist side of surreal. Photograph: Tihomir Pinter

Then there is Peter, a university student who has put his official studies on hold as he concentrates on his own appreciation of the night skies. Peter is somewhat tormented by sexual cravings for his under-age cousin Elizabeta, wayward daughter of Aunt Mara, a fiftysomething widow with dreams of having her art acknowledged.

Following the brief war of independence in the 1990s, this Slovenian family moves from the city to make a new life in the countryside. Future happiness is to be found in the restoration of an old farmhouse.

Also accompanying the clan is the unnaturally resilient Uncle Vinko, once an accountant, “but for years in the grip of an ambition to grow the biggest head of cabbage in the world and find his way into the Guinness Book of Records”.

Vladimir, a cousin of the father, has come along. His marriage to a much younger woman is obviously in its death throes, yet Vladimir is confident of finding the peace conducive to completing memoirs of his years as a heroic partisan in the second World War.

Ah yes, all with his or her own projects. They appear a harmless bunch, and the reader receives detailed reports from the narrator, a young boy who wishes to be a writer. He proves reliable because, leaving nothing to chance, what he fails to see or hear directly, he spies on. We should trust him because no one else could; he sneaks around in search of answers and usually avoids detection.

He is the youngest son and is also interested in Elizabeta, perhaps not quite as taken with her as his sex-crazed older brother. But he does get to know her far better than he had ever imagined.

Evald Flisar is Slovenia’s major international literary presence. He is very versatile – in addition to writing fiction that tends to hover on the realist side of surreal, confirming an affinity with the European Theatre of the Absurd, he is a perceptive commentator, too skilful to dabble in polemic.

Flisar’s flair for laconic description makes place come alive. He has to date visited nearly 100 countries, and his travel writing is informed, atmospheric and vibrant. There is a conversational quality about his prose and, through his fluent command of English, is alert to the potential of the slightest nuance. He has also been involved in the translation of many works, including his own, such as My Father’s Dreams (2015).

In Three Loves, One Death, it may appear that all is well; the extended family members are in search of sanctuary and collaborate in putting the house and its six outbuildings to rights. It seems a haven for rest, recovery and contemplation. But from the earliest pages, something is at work. In burying the traces of agricultural debris lying about, it may appear that the past is to be discarded.

“What use were broken pickaxes, hoes, forks, scythes, sickles, ploughshares, harrows and so on? We hadn’t returned to the village to start farming again after two generations of urban living.”

With the next sentence, Flisar, whose lightness of touch is the hallmark of his writing style, makes clear that this fast-moving narrative is far more than a black comedy featuring a household of harmless eccentrics: “Everything superfluous that reminded us too clearly of other times, other places, other stories should be buried away out of sight.”

At the mention of “mistakes of the past”, his intent is obvious. The young narrator has few delusions about a chance of a psychological de-cluttering; it is not possible.

The narrative is dense with symbolism. For all the humour and sense of everyday domesticity rife with intergenerational tensions, Three Loves, One Death exposes freedom as a terrifying burden. The family have moved to an idealised space, only to feel trapped by the presence of a mysterious, almost functioning, if useless, contraption.

It is discovered inside a shed and consists of a jumble of parts and fragments, complete with a radio blaring Arabic. Interestingly, the character who makes the most convincing shot at defining what the thing could be is Vladimir’s flighty wife, who thinks it resembles the outcome of a crash involving a sports car and “a tractor full of farming tools”.

Aunt Mara is keen to paint it; she deems it an “artistic challenge”. Whatever it is, it introduces a sinister ambivalence. The family want to get rid of it, yet decline cash offers and instead wish only to have it identified.

Young Elizabeta, determined to provoke and offend from the start, assumes the role of a sluttish sprite, part embittered Ariel, part Antigone. She unleashes nasty comments at will. Yet in the midst of her sexualised goading, she utters a prophetic truth: she declares the device to be evil.

The narrator reports her as having claimed it was “made by spirits under cover of night to bring conflict and confusion to our family and to drive us away, since it was obvious that we would never find peace or happiness here.”

Flisar allows his characters to express their unease. There is extensive interaction, which makes the story oddly convincing. It is as if we the readers are, in common with the narrator, eavesdropping, peering around half-closed doors.

The mysterious object settles into becoming a malignant treasure, coveted by the neighbouring Roma community. Into the upheaval wanders mum’s long-lost half-brother Svejik, named after the famous Czech fictional hero and destined, at least as far as granny, his mother, was once convinced, for greatness. Svejik joins the local fire brigade.

Flisar enjoys playing with light and dark, the fantastical and the believable. His bewildered characters do his biding, brilliantly. Three Loves, One Death is part of his Village trilogy, which also includes the semi-autobiographical masterwork, My Father’s Dreams, featuring another boy narrator who sees too much and remembers everything.

Eileen Battersby is Literary Correspondent. Her debut novel, Teethmarks on My Tongue, is published by Dalkey Archive Press.