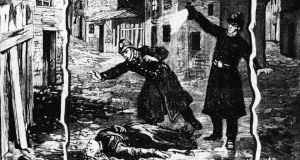 Book Title:
They All Love Jack

The vectors of history pivot on poor decisions made by powerful people. Hitler twisting the point of his Axis from Britain to the USSR in 1940. JFK riding around Dallas without a helmet in 1963. A gum-chewing TV star, Lewis Collins, turning up in full SAS regalia for a job interview with the James Bond producer Cubby Broccoli in 1982.

And then there was the decision, on September 30th, 1888, by the head of the Metropolitan Police in London, to order the destruction of a scrawl on a wall attributed by many contemporaries, and many people since, to Jack the Ripper.

“Why this writing was really rubbed out has defined the life-blood of Bro Jack and the circus of smokescreens and moving mirrors ever since,” Bruce Robinson writes in They All Love Jack, a humongous addition to the vast body of literature on the world’s most famous serial killer.

The use of “Bro” isn’t idle sarcasm: Robinson is identifying the Ripper as a Freemason. The message that the killer, or someone, wrote on that East End wall (thankfully transcribed by a bobby, as a piece of graphological evidence, before Commissioner Charles Warren had it erased) was: “The Juwes are the men who will not be blamed for nothing”.

Robinson claims that “Juwes” referred to the three assassins of Masonic legend – Jubela, Jubelo and Jubelum – and that Jack was playing mind games with Warren, one of the most eminent and zealous Freemasons of his day. He sees evidence of Masonic trolling in other places as well, most clearly in the shambles of the Ripper’s victims, which bear the signature of ritualistic slaughter.

“Bro Jack” isn’t an original theory, but here it is excavated, irrigated and set anew into an expansive narrative of Masonic involvement in the British establishment at the height of empire. Would it all stand up before a panel of history-PhD assessors? No. But that doesn’t matter.

Jack the Ripper is a gift to writers who choose to go there. So murky is the mystery yet so large is the cast and labyrinthine the setting that it’s not so much a story to reinterpret as a box of almost infinite parts that is anyone’s to make what they want with: a social history of late Victorian London, a lurid Hammer horror, or a panorama of a grand conspiracy.

Robinson emerges with his conspiracy – and how he runs with it, with glee, with humour, with disgust and with a weight of research his own. Nobody has written this well on Jack the Ripper before.

You might have heard of Bruce Robinson in another context: he is the genius screenwriter and director of the film Withnail & I, from 1987. They All Love Jack shares that screenplay’s qualities: dense with detail but delivered with such propulsion that the detail goes down easy.

You do sense Robinson’s logic making the odd synaptic pole vault to keep pace with his energy, but there isn’t a sentence here that’s not entertaining, elegant or both – and rather a passionate literary polemic than a dry history any day.

Passion is this book’s arterial blood; Robinson has apparently spent 20 years working on it. You could call it a labour of love, but that doesn’t quite cut it. It’s more a labour of righteous anger. From the off the author tears into his targets like an enraged wolverine. F-bombs sprinkle the text. Scurrilous and hilarious attributions – “ . . . he shitmouthed”, “ . . . said the rented mouth” – leave you in no doubt what the author thinks of the speaker. Passages of quotation are signed off with the like of: “To which I add the word ‘Bollocks’.” Epees are thrust at modern right-wingers (Thatcher, Blair, Murdoch). And once you know the Withnail connection it’s hard not to imagine a dissolute Richard E Grant uttering a line such as, “The logistics of the buffoon’s evaporation are of little interest.”

It calms down a bit once Robinson starts presenting his evidence with meticulous method, but it never stops entertaining.

The book has two major beefs. The first is with the Victorian establishment: royalty, government, judiciary, police. Robinson finds that an astonishing number of its members were Freemasons. The Masonic oath pledges its takers to protect their own, and when Jack revealed himself to be an impish and evil “Bro” intent on besmirching the powers-that-be the system hid and degraded evidence.

Robinson’s other big bugbear is the so-called Ripperology community, that collective of chroniclers and postulators whose works constitute “an expulsion of syncopated crap masquerading as history”. It, too, is complicit in the cover-up, taking at their word the depositions and memoirs of Victorians VIPs and so perpetuating the idea that the Ripper is a mystery. It isn’t a mystery! shouts Robinson. It’s clear what – and who – Jack was.

Who was the Ripper, according to the author? He offers a name that first appeared in association with James Maybrick, another suspect whose candidature gained legs in the early 1990s, only to be shot apart by Robinson’s despised Ripperologists.

The Maybrick name is toxic in the field of Ripper studies, but Robinson makes a comprehensive case for his man. So persuasive is he that to even doubt him is to feel that you’re siding with Ripperology and, ergo, with a right-wing conspiracy.

It’s not important who Jack the Ripper was anyway. At this remove, 127 years on from London’s Autumn of Terror, Jack is trivia beside the wider course of history, a circular side show. Robinson’s achievement isn’t in revealing the Ripper but in writing the most involving, audacious and wonderfully bonkers book of the year.

Gavin Corbett’s most recent novel is Green Glowing Skull. Read his essay about his fascination with Jack the Ripper in the latest issue of The Stinging Fly