The slave girl’s story I wasn’t supposed to write

I didn’t want to undertake a book about a child in slavery. It wasn’t my story to write and besides, I had plenty of traumatic historical options to choose from closer to home 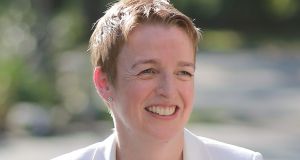 Yvonne Cassidy: readers seemed to have a hard time accepting that the world they had come to believe in was one I had made up

“Where did you get the idea for this book?”

This is the question you get asked the most as a novelist. You get asked by journalists, by audience members at readings, by students, even by friends. One of the things that surprised me when I published my first novel was that people assumed it was autobiographical.

Cassie is the novel’s lead narrator. An Irish-American teenager in affluent Brooklyn Heights, she should have nothing in common with her co-narrator EL – a slave

Readers who didn’t know me were surprised to find out that I was an only child, that both my parents are alive, that I have all my limbs intact. Readers who knew me seemed eager to identify people they knew – and themselves – among my fictional characters. Some were even offended when they didn’t appear! Even though my books are fiction, readers seemed to have a hard time accepting that the world they had come to believe in was one I had made up.

Writers make stuff up. It’s what we do. But like any good lie, it has to start with a grain of truth. The finished story might have elements of truth, it might reflect some things that really happened. But that does not make it true.

Already, I’ve been asked a lot about where the idea came from for my latest novel, I’m Right Here, which is out this week. I’ve a feeling I will be asked this more than for my other books. You see, this novel is new territory for me. Much of it is set on a cotton plantation in South Carolina in the 1850s. There are two narrators. There is a fantastical dimension to it with one character thinking she can communicate with dead people. Clearly, all of these things couldn’t have happened to me.

Cassie is the novel’s lead narrator. An Irish-American teenager growing up in the affluent suburb of Brooklyn Heights, she should have nothing in common with her co-narrator EL – a slave who has lost both parents and will lose much more over the course of the book. But yet she has, yet they do. And this point of connection, this friendship, becomes ever more vital as both girls’ worlds fall apart.

It was EL who came to me first. I was on holidays in Charleston and I found myself with unexpected alone time wandering around the city while my wife was sick. Time to wander in a new place – especially a city – has always been fertile writing ground for me. And that day, one of the places I found myself wandering into was the Old Slave Mart Museum.

Like you, I’ve watched television programmes and films about slavery. I’ve read books. I felt reasonably well informed about the events in the South that led to the Civil War. But I had never been in a place like this – a place where the horror of human beings being bought and sold seemed sealed into the cold stone walls – and it was here that the knowledge become more than knowledge. It became that feeling I get when I know it’s something I want to write about.

At first I didn’t want to write EL’s character. I knew she was a child straight away, and I didn’t want to undertake a book about a child in slavery. It wasn’t my story to write and besides, if I wanted to write about a child’s experience of traumatic historical events, I had plenty of options to choose from closer to home. But the more I ignored EL, the louder her voice became and I found myself writing about her on the side, just to get her out of my system, so I could start my “real” book. The book that was under contract, that had a deadline. The book that would be nothing to do with slavery.

The problem was, the “real” book was slow going. The only character who kept showing up when I sat down to write was EL. When one day I found myself drawn to an old writing haunt – a shabby writing cafe in Brooklyn, 45 minutes on the subway from where I lived – I didn’t question it. And that was the day Cassie first showed up on the page.

Once I found Cassie, her story came fast, almost as fast as EL’s. In a way I didn’t understand yet, I knew that both girls’ lives were connected, that Cassie would be my way into EL’s story. But despite how well the characters were developing, I worried. I worried about the structure, how I was going to put shape on this fragmented narrative. I worried that I wouldn’t get EL’s voice right which brought me back to my original worry – that I shouldn’t be writing this story in the first place.

Then one day a friend I met for lunch in Brooklyn Heights told me a little of the history of the area. How it had been the heart of the anti-slavery movement in New York and my shabby writing cafe was mere blocks from a famous church that was part of the Underground Railroad, where the most famous abolitionist of the time had helped free many slaves. After that, I worried less. As I headed to the cafe to begin my day’s work I thought about how under the very paths I walked, there were old tunnels and cellars that had housed escaped slaves on the run and it felt like a sign.

The central question of I’m Right Here is whether or not EL is a real person – Cassie’s experience of the gift she has inherited from her grandfather – or whether, as everyone else thinks, she has a mental illness. Already, readers are asking me which version is true, what the “right” answer is. But there is no “right” answer, only the reader’s interpretation of what happened, just like there always is. No point in asking me, I’m just the author, remember. I just made the whole thing up.

I’m Right Here by Yvonne Cassidy is published by Hachette Ireland, at £13.99