The Rising will not be televised: a novel attempt to focus modern minds on 1916

The challenge of my second novel, Citizens, was to portray today's disinterested generation, hostile to the idea of historical understanding, having to grapple with 1916 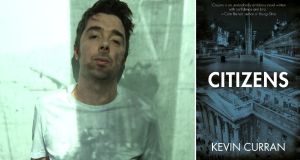 Kevin Curran: my novel’s contemporary protagonist, a soon to be emigrant in 2011, is faced with a choice to engage with never-seen-before antique film footage of Easter week 1916 and its outmoded notions of patriotism and nationalism, or cast them aside and become a global citizen

The American writer Don DeLillo spoke in the Paris Review about the 18-second Zapruder film that captured JFK’s assassination and the effect it had on the American psyche. “There’s something inevitable about the Zapruder film,” DeLillo said, “it had to happen this way. The moment belongs to the twentieth century, which means it had to be captured on film.” On film. Even in the twentieth century, one of world literature’s greatest living writers was flagging the ubiquitous nature of the moving image and seeing the solidifying, fastening properties bestowed on an event when captured by moving images. And, unfortunately, the reductive effect on events not captured by images.

Film has become anachronistic in the 21st century, yet the image, the moving image and in turn its companion, the screen, have become the prerequisite for cataloguing existence, for bestowing historical importance or worth to any moment in the 21st century. Think of Christmas gone, New Year, think of last summer. They are made real again, not by diary entries (who writes a diary?) or blogs (who reads blogs?) or memoirs (who is interesting enough to write one?) but by the photos or videos stored on your iPhone, or posted on your social media account. History, for a whole new generation, has become a detextualised appreciation of the image. This distances us empathetically from pre-moving-image history, textual history.

This was the challenge of my second novel, Citizens. To portray a disinterested contemporary mind, hostile to the idea of historical understanding, having to grapple with the past. The novel’s contemporary protagonist, a soon to be emigrant in 2011, is faced with a choice to engage with never-seen-before antique film footage of Easter week 1916 and its outmoded notions of patriotism and nationalism, or cast them aside and become a global citizen. For my generation, just like our contemporary protagonist, the choice isn’t all that hard; the Easter Rising and its participants don’t lend themselves easily to a contemporary understanding.

Some of the leaders of the 1916 rebellion saw their actions as a performance or street theatre that would hold a textual symbolic importance for future generations to appreciate (think of Michael Collins’ quip about the Rising as Greek tragedy). What hope, then, has a postmodern mind in engaging empathetically with a dead text without the meaningful stimulus of the ever-present images of war or dead bodies to supplement its interest? This is the Rising’s problem. The postmodern mind, as flagged by Richard Kearney in his The Wake of Imagination, has lost the capacity to imagine, engage, understand, and therefore empathise, without the help of the image, because, ironically, of the ubiquitous nature and desensitising effect of the image.

Although only 100 years old, the Rising might as well be 200. It has lost its meaning for a generation brought up on atrocity images and voyeuristic glimpses of historical events unfolding as they happen, in high definition. Moving backwards for the Facebook generation through historically important memories or defining moments, there are a number of things to observe. One: They are more global than international memories (national memories are sporting – are they not?) Two: The newer are clearer thanks to HD capabilities, but still not as shocking as the older ones. And three: The older images are probably more sensational (because that’s how we remember them) but also because we have become desensitised to images of war and suffering – because of previous images.

Citizens asks what would a contemporary mind see or think if the men and women we are to celebrate this year were filmed in the act of open rebellion on our capital city’s streets? For a start, would a contemporary mind, like Citizens’ protagonist, Neil, jaded by images and oblivious to history, actually care? And even if he did care, would what he sees give him a greater understanding of Easter week? Would it take film footage of an innocent child from the slums of Dublin being shot in the back by a stray bullet to make him really engage with the actions of the rebels? Would it take footage of a man pulling a cart from a barricade on Stephen’s Green being shot at point-blank range by a rebel to make him understand the realities of nationalism?

The postmodern mind dances on the grave of modernist idealism. It is cynical. In Ireland especially, the generation in their twenties when the crash happened, like the protagonist of Citizens, is suspicious of talk of “pulling on the green jersey” and making sacrifices for the “greater good”. Citizens’ protagonist hasn’t rebelled against the causes of austerity, the cuts or the growing inequality. Instead he has joined the dole queue and plans to emigrate. Without a whimper. And yet, his generation is meant to celebrate political radicals from 100 years ago who – for their own idealised notion of the “green jersey” – shunned the general consensus on what was the “greater good” and took to the streets. Is it any wonder a sense of national identity has been skewed and cast off by a new generation? Is it any wonder there are 205,000 fewer twenty-somethings in this country than six years ago? The hypocrisy and double-speak of our republic is flabbergasting. Contemporary rebels are shunned, those who question the status quo dismissed. They are the idealistic young.

And yet, the men and women of 1916 were undoubted idealists. This should be an easy entry point for a young contemporary mind to begin understanding them. But our political system, (Minister for Justice Frances Fitzgerald telling people at Béal na mBláth how Michael Collins would never have backed violent protest!?) and the past few years after the crash of neoliberalism have turned a generation into cynics. This is why the people of 1916 are so foreign to my generation and people like our protagonist in Citizens. Yes, there are any number of non-fiction accounts that try and help us understand what 1916 was all about, but it is also a lack of fictional attempts to engage empathetically with the minds of 1916 as well as a lack of moving image accounts that is preventing a whole generation from empathising – truly engaging – with the idealism of the age.

If our current republic is a product of the one rebels tried to establish in 1916, why would you want to bother engaging with them, you may ask. In fairness, a republic that ignores her young (mass emigration) and still tolerates child poverty and dismisses mass protests and popular movements, doesn’t seem like much of a creation. But if we go beyond the actual republic and try to imagine what exactly it was the idealists felt as they stepped out on Sackville Street on that Monday in 1916, if we can imagine a set of news-reels that actually captured the truth of the fight, we may, finally, see through the white noise of politics and truly experience the Rising as a 20th century event, but through a 21st-century HD screen of new historical empathy.

Citizens by Kevin Curran is published by Liberties Press, at €13.99