The Real People of Joyce’s Ulysses: A Biographical Guide by Vivien Igoe review 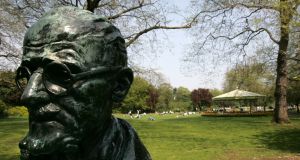 Garryowen was a champion Irish red setter, born in 1876 and owned by James J Giltrap, a law agent. He won no fewer than 34 major prizes and gave his name to Garryowen plug tobacco. He was a real dog, just as Giltrap was a real person, in fact the father of Joyce’s Aunt Josephine, one of the main influences on the writer in his early years.

Garryowen is mentioned by the fictional Gerty McDowell in the 13th episode of Ulysses: “grandpapa Giltrap’s lovely dog Garryowen that almost talked it was so human”. (He has clearly been given a new lease of life, of course, since this is 1904.) But that this is the same Garryowen, despite appearances to the contrary, as the “mangy mongrel” that goes for Bloom at the end of the 12th episode is made clear by the narrator of that episode, who refers to “old Giltrap’s dog”.

It might seem strange that Garryowen merits an entry of his own in a book called The Real People of Joyce’s Ulysses, he not being exactly a person, but in fact the entry is fully deserved: for most readers, Garryowen is at least as much a character in the book as many others.

More widely, though, the case of the resurrected Garryowen is a good exemplar of the strange mix of the fictional and the factual that permeates the work. A real dog, with a real owner, becomes seamlessly incorporated into a fictional world, and their reality, known of course to some people in 1904 and later, has to be uncovered by scholarly research many years thereafter.

Part of the reason for this belated uncovering has to do with the peculiar circumstances of the publication of Ulysses in 1922. Its reception was largely among an Anglo-American and European cultural elite whose knowledge of the world Ulysses came from and dealt with was slight indeed; in some cases, their attitude to that world was positively hostile. As a result, it was only much later, starting probably with Robert Martin Adams’s Surface and Symbol of 1962, that the depth of Joyce’s immersion in the Dublin environment, much more than just a background or a setting for Ulysses, was fully realised.

Research In latter years, a great deal of research has been done on the “real” people and things of Ulysses. Vivien Igoe’s book advances that process considerably. Research in this area is continuing and further discoveries will no doubt be made. But Igoe’s book is by far the most comprehensive and thorough on the subject that has appeared to date.

Igoe, who has long been devoted to Joyce studies and research (indeed, she flew the flag at a time when it was far less fashionable than now) has demonstrated the amazing range and variety of the world of Ulysses, the sense that the work is indeed “allincluding”, as it describes itself. Mostly, of course, this has to do with Dublin’s citizens, covering a wider range of classes and types than one might imagine, but there are other sources of real people as well.

An interesting one is Gibraltar, virtually the only place Joyce wrote about in some detail where he had never been. Igoe has done considerable work in that area and has provided much fuller accounts than previously available for several individuals, including the memorably named Mrs Opisso.

Many of the people she discusses had already been identified in works such as Gifford’s and Seidman’s Ulysses Annotated; where Igoe’s book excels is in the detail and depth of the biographical information she presents; one feels one knows these people very well, and thereby one knows the world of Ulysses all the better. Particularly welcome are the pictures of many of the characters that are used throughout: the photograph of Richard Trench (Haines) is a great find.

A very useful feature is the indication of the cemeteries in which these who “once walked round Dublin” now lie. These burial plots are listed in an appendix, complete with maps. Another appendix features the many horses mentioned in the book; these are not considered people, but they are very much part of the book’s fabric and again it is good to be given a sense of their actual careers, confirming the importance of racing as part of this world.

Igoe’s book makes one acutely conscious of the particular historical juncture in which Ulysses is situated. For one thing, the country in which it happens was formally a united one; this is evidenced in the book by, for instance, the northern concert tour in which Molly Bloom is to star, where no issue of a border arises.

Also, a lot of the people mentioned had lives and careers that straddled the break occasioned by the War of Independence and the Treaty. In a sense, they moved from one world to another, sometimes with anomalous results.

A case in point is William E Wylie, mentioned several times in Ulysses. He was a prosecuting counsel at the trials of the 1916 leaders, a role one might imagine would be something of a hindrance to a legal career in the new Ireland.

In fact, he went on to become a judge of the High Court and later a president of the RDS, leading one to wonder, not for the first time, just what changed, and in what ways, after all the turmoil. Ulysses is no longer seen as a work isolated from history, and Igoe’s book, with its stress on its roots, helps one to understand why.

Above all, though, this book gives one a sharper sense than ever of the inextricable blending of the fictional and the factual that is such a remarkable feature of Joyce’s work. It is sometimes impossible to distinguish the two.

The author herself has understandable trouble making the distinction: when she writes, for instance, that the real person Mat Dillon was a friend of Molly’s father, Major Brian Tweedy, she has momentarily stepped inside the pages of the book, since the latter did not exist outside Ulysses. (And it is a pity that the old canard of Joyce being rescued by Alfred Hunter is given another airing.)

This imbrication reinforces the sense that one of the functions of Ulysses – and not its least important – is indeed as a kind of Dublin chronicle: a record, a testimonial, and a monument to what Joyce rightly called, in a letter quoted here, “a vanished world”. And that testimonial has received its own special tribute and complement in Vivien Igoe’s work.