The new globalisation: a manufactured crisis

Low-skill workers are fighting robots at home and China abroad. Fear of globalisation is rational but voting against openness is like treating a broken leg with antibiotics 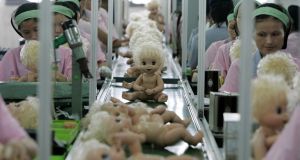 A toy factory in Panyu, China. South Carolina low-skill workers are fighting robots at home and China abroad. The battle is not going well. Photograph: Reuters

For a century, textile mills were abundant in the US state of South Carolina. Jobs were plentiful for high-and low-skill workers alike. This is no longer true. South Carolina low-skill workers are fighting robots at home and China abroad. The battle is not going well. Digitally-assisted manufacturing transformed South Carolina textile mills into nearly autonomous, computer-run machines. The telling local joke, related by Adam Davidson in his 2012 Atlantic magazine article Making it in America, is that a modern textile mill employs only a man and a dog. The man is there to feed the dog, and the dog is there to keep people away from the machines.

As a consequence, manufacturing is bifurcating. Stages of production that stay in the US employ a few high-skilled workers and lots of technology. Low-skill occupations are packed up into stages and offshored to low-wage nations, or automatised. Things have not yet gone so far in Europe, but the trend is all too clear. Europe’s postwar manufacturing miracle has turned into the 21st-century manufacturing malaise.

This malaise evokes an understandable nostalgia from policymakers, social activists and analysts. In 1950, a fifth of Europeans worked on farms, incomes were low, and social services were meagre. By the 1973 oil shock, Europe was transformed. Postwar hunger, dislocation and destruction were replaced by mass consumerism and middle-class affluence. Europe’s cradle-to-grave social policy was the envy of the world. All this was closely correlated with Europe’s manufacturing miracle. Industrial output rose faster than national incomes and industrial exports grew faster than either.

Many take this manufacturing-prosperity correlation as causal and seem determined to fight Europe’s current malaise by fostering European manufacturing. It worked for the postwar generation, why can’t it work for the post-Crisis generation?

One part of my new book, The Great Convergence, suggests a stark answer: manufacturing cannot play the role today that it did in the postwar years for one simple reason. The nature of globalisation changed.

Information technology transformed globalisation by allowing rich-nation firms to combine their advanced knowhow with workers in low-wage nations. The new knowledge flows helped industrialise some poor nations, but disrupted the livelihoods of many rich-nation workers. Indeed, the anger, frustration and economic disenfranchisement are rational. The New Globalisation is impacting rich nation economies in a way that is more individual, more sudden, more unpredictable and more uncontrollable.

The New Globalisation, in nutshell, is wilder than the Old Globalisation, and generally less fair. Firms in rich nations can now leverage their knowledge assets by moving the know-how to developing nations. This boosts the value of firms while undermining wage bargaining power of rich nation workers.

The competition facing the most highly skilled and well placed workers in the US has not increased; quite the opposite. The New Globalisation provides a wider field to which they can apply their talents. But for US workers whose skills are closer to those of workers in developing nations, the New Globalisation is a very clear rise in competition – especially since their employers’ knowledge environments are increasing offshorable.

The insecurity is heightened by the seeming unpredictability of globalisation’s future course. The sunrise and sunset sectors approach no longer works. Under the New Globalisation, global competition is a much more personal thing. To put it sharply: no matter what job you have and no matter what sector you work in, you cannot really be sure that your job won’t be the next to suffer or benefit from globalisation.

This makes people afraid; it creates a palpable sense of insecurity that may seem unjustified give the raw economic statistics such as joblessness or average wage rises.

The rage is rational, the typical reaction is not. Misthinking has led politicians – from the mainstream to rabble-rousing populists – to propose policies that will not redress the real problem.

Shutting off trade and rupturing trade agreements will simply lead firms to move more jobs and more of their knowhow abroad. The Old Globalisation fallacy in operation here is the notion that competency is a national concept, so controlling borders controls economic outcomes.

In the New Globalisation, competitiveness is a transnational concept. In the car industry, for example, what matters is Factory Europe, not Factory Britain or Factory Ireland. Tearing up relations with the EU, which has underpinned the smooth integration of British firms into Factory Europe, will not save jobs; it will destroy them. It would be like thinking one could create more jobs at the start of the production line in the Chrysler factory in Michigan by constructing walls inside the factory.

The basic point is that nations don’t own manufacturing knowhow, firms do. And those firms can and will offshore it as domestic conditions deteriorate.

The right answer is to ensure the rich nations remain attractive places to produce while simultaneously creating a comprehensive package of social and economic policies that allow all to believe they will have a fair share of the gains and pains of globalisation and technological progress. People should feel that no matter what job they have and no matter where they live, the government will ensure that they can thrive in the face of future challenges – be they due to globalisation, automation, demographics or climate change.

Likewise, shutting off migration might help boost some native wages but for the most part migrants are not coming in to compete for jobs that are offshorable. At the low end of the skill range, migrants are taking jobs that native workers don’t want. Often these are in the sectors that are insulated from globalisation (non-traded sectors), or are at the high end of the skill range, where the newcomers are often providing missing skills.

In short, we should realise that deep well of anti-globalisation feelings is real and rational, and globalisation is definitely a key culprit, but try to cure anti-globalisation by voting against openness is like treating a broken leg with antibiotics. Effective medicine misapplied.

The Great Convergence: Information Technology and the New Globalization by Richard Baldwin is published by Harvard University Press