The ‘Nation’ once again: newspapers and nationalism 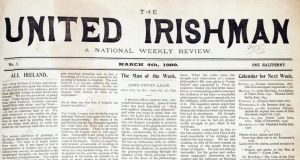 Book Title:
Newspapers and Newsmakers: The Dublin Nationalist Press in the Mid-Nineteenth Century

If you want to find the sources of modern Irish nationalism, the ideology that led both to the constitutional and physical-force traditions and to the events that will be celebrated over the next few years, then look no further than the Nation.

Founded in 1842 by three young men – Charles Gavan Duffy, Thomas Davis and John Blake Dillon – the newspaper “heralds one of the most important developments in the history of Irish nationalism”, according to Ann Andrews.

This historian’s work puts the newspaper at the centre of developments. Newspapers and Newsmakers: The Dublin Nationalist Press in the Mid-Nineteenth Century, which deals with the years 1842 to 1867, looks at the role of the papers attached to nationalist organisations and strands, from the Repeal press to the Fenian Irish People, closed by the British authorities in 1866.

The Nation and Young Ireland, like its adversary Daniel O’Connell, dominate much of the period. The Nation represented a new era of Irish nationalism that was both political and cultural, as well as a new form of journalism that was conscious of its role and willing to articulate the importance of what it was about.

It is little wonder that press freedom was among the many differences that the newspaper had with O’Connell. O’Connell got it seriously wrong when he dismissed the Young Irelanders as “merely writers for a newspaper”.

Various factions had their own newspapers, some lasting only a year or two, but others lasted long enough to have profound influence. The tensions within the Repeal movement can be discerned in the leading articles of the Nation and the Pilot (the latter unquestioningly loyal to O’Connell).

Later we witness the role of the press in articulating the positions taken in terms of developing ideas around class and creed and between constitutional and revolutionary nationalism, even if at an embryonic stage.

The development of Irish nationalism at this period was played out against the Great Famine, which was the context for the founding by John Mitchell, after the failure of the rising of 1848, of the more extreme United Irishman newspaper.

The rhetoric of the United Irishman was designed to foment disaffection, force repressive measures against the paper and make the Whig government resort to a packed jury to convict Mitchell, which would lead to a revolution. The United Irishman was suppressed, and in its place a range of newspapers appeared, the Irishman, the Irish Tribune and the Dublin Felon among them.

Andrews quotes Lenin on the importance of a newspaper in building a revolutionary party, and there is no doubt that a newspaper was essential in building political support for nationalist causes and organisations. The role of the Irish People and the growth of the Fenians during the period from 1863 to 1866 are testament to that.

Newspapers of this period played a huge role in the development of a public debate about nationalism but also left a legacy of writings by men such as James Fintan Lalor, John Mitchell and Charles Gavan Duffy, who would influence a later generation of nationalists.

This is an original study of the press, something that many historians have ignored or whose role has been misunderstood. It is a valuable contribution to the historiography of Irish nationalism and 19th-century Irish history, and an important work in that the press generally before 1850 has tended to be neglected by press historians.

If there is a fault it is a lack of wider press context. The mainstream publications, with the exception of the Freeman’s Journal group, are ignored.

It is also a pity that such an expensive book could not have included some illustrations, even if only to show the reader what some of the newspapers under discussion looked like.