The Kremlin Letters: Stalin’s wartime writing to Churchill and Roosevelt

Review: A remarkable collection showcasing the skill of wartime diplomacy by letter-writing 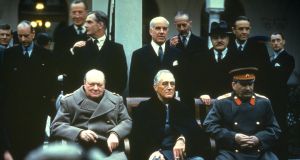 Given the enormous number of books that have been written about the diplomacy of the second World War, one might assume that there is nothing more we can learn from a renewed examination of the correspondence among Winston Churchill, Franklin Roosevelt and Joseph Stalin. But the recent publication of The Kremlin Letters: Stalin’s Wartime Correspondence with Churchill and Roosevelt unquestionably renders this a false assumption. Edited by David Reynolds and Vladimir Pechatnov, The Kremlin Letters offers the reader unprecedented access to the inner workings of the “Big Three” as they struggled to maintain the unity of the wartime alliance.

What makes this work unique is not only the on-going historical context that the two editors provide as we move through the various stages of the War, but also their close examination of the process by which the messages sent between the three leaders were drafted, edited, translated and dispatched. All three men were wordsmiths in their own right, but their approach to the crafting of the messages they sent to one another – in what the editors adroitly refer to as this “epistolary relationship” – reveals a great deal about their motives and personalities.

Churchill, for example, viewed the messages he sent to the other two leaders as a surrogate for conversation. He dictated all of his communications to his secretaries, often disclosing a certain degree of angst as he struggled to find the right words. Churchill’s wild swings of emotion over how Stalin might or might not react to one of his carefully crafted messages – as was the case in their tense exchange of messages over Churchill’s decision to suspend the dispatch of the Arctic supply convoys in July 1942 – helps bring the drama of the War to life, while at the same time providing us a window into the precarious nature of the alliance.

FDR’s involvement in the drafting of his correspondence was more distant. Initially handled by his trusted confidant, Harry Hopkins, during the War, Admiral Leahy took on the task, and in both cases, the president would add his own personal touches. FDR frequently allowed Churchill to update Stalin on the status of the Anglo-American war effort, which more often than not included discouraging news about the inability of the western powers to open a second front in northwest Europe. This distance reveals a good deal about his quiet confidence, and preference for personal diplomacy.

Written communication was always intended “to facilitate a real meeting of men and minds” for FDR, where he could use his much-heralded powers of persuasion to try to steer the course of events towards the achievement of his long-term goals. Viewed in this light, FDR’s determination not to allow such issues as the future disposition of Poland to get in the way of his efforts to establish the United Nations and draw the Soviet Union into what he called “the family of nations” after the War, becomes more understandable.

Perhaps the most revealing aspect of the work, however, is its revelations about how Stalin managed his relations with Churchill and Roosevelt. Here, we learn that Stalin’s much more terse and matter-of-fact missives were not necessarily the product of his own hand, as is often assumed, but were embellished by him after being drafted by his foreign secretary, Vyacheslav Molotov. By providing the reader with the versions of the texts that show Stalin’s changes, we not only get a far more nuanced understanding of Stalin’s thinking, but also a deeper sense of his preference to work in concert with a small team of trusted aides, even though there was never any question in any of their minds that Stalin was the boss.

This pattern of showing how many of the original draft messages were altered or edited by each of the three leaders is carried on throughout the work, often revealing some startling new bits of information, such as the fact that it was FDR, not Stalin, who initiated the request to seek accommodation in the Soviet embassy compound at the Tehran conference in 1943.

Another interesting aspect of the book involves the role played by such figures as Ivan Maisky, the Soviet Ambassador to the United Kingdom, or Maxim Litvinov, Soviet Ambassador in Washington. Labeled “double interpreters” by the editors, it was often the case that each man not only shouldered the responsibility of trying to report the reaction to a given piece of communication back to Moscow, but also frequently found themselves in the position of trying to provide a more fulsome explanation of the meaning of a particular message sent by Stalin to Churchill or Roosevelt.

In one remarkable conversation held between Maisky and Churchill, for example, after Churchill had complained bitterly that he was “getting rather tired of being scolded” by Stalin over the question of a second front, Maisky acknowledged that Stalin was “harsh in manner” but urged the prime minister “not to attach importance to the tone of [his] messages”.

Like Churchill and Roosevelt, who referred to Stalin as “uncle Joe” in their correspondence throughout the War, we also learn that the Soviets developed their own nicknames for Stalin’s counterparts, referring to Roosevelt (whom they generally held in higher esteem than Churchill) as “the Captain” and to Churchill as “the Wild Boar”.

The Kremlin Letters is a remarkable book, one that is not only informative, but also a pleasure to read, thanks in large part to the ongoing narrative that the editors and authors provide. What emerges is a view of the War that is vastly different from the more standard works on what Churchill called “the Grand Alliance”. In describing an era long before the advent of mobile phones, email, Twitter and Facetime, or the 24-7 news cycle, when traditional letter writing still dominated the art of diplomacy, we are granted a personal look into the minds of the three men at the top as they made history and, in sharp contrast to the unsuccessful Berlin-Rome-Tokyo Axis, used their epistolary relationship to fashion what must be regarded as one of the most effective international coalitions in the history of warfare.

David B Woolner is senior fellow of the Roosevelt Institute, professor of history at Marist College in New York, and author of The Last 100 Days: FDR at War and at Peace.