JP Donleavy’s lively picaresque novel, first published in 1955, has never been out of print 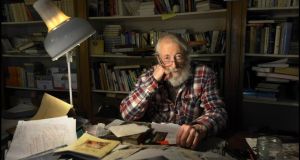 Life is not going well for Sebastian Dangerfield, an American in postwar Dublin courtesy of the GI bill of rights, although his posh accent does prove to be of use when seeking credit.

He is attempting to study law at Trinity College, but there are multiple distractions, namely public houses and willing females. He is also married. Rented accommodation never can provide the comforts of home. His wife is not too happy, their baby daughter seems to cry most of the time, there is no money to be had and the unabashedly sexist Dangerfield, ever on the run from his mounting debts, is always in need of a drink. Welcome to one man’s not-so-private hell.

The Ginger Man, JP Donleavy’s classic sub-Joycean, highly visual novel has reached its 60th birthday without ever having relinquished the affections of its many devoted readers. It caused quite a bit of fuss in its day, not least in its battle to get published, which is explained in a comprehensive article by Colin Overall on the Irish Times website. Yet Donleavy, like his hero, fought on. Dangerfield has endured, surviving all that alcohol, cavalier treatment of indulgent women, those brawls, those frustrations and the rampaging litany of hope and despair that races through his heated mind.

Early in the third-person narrative, which frequently darts and drifts, like a shadow boxer, into a near-hallucinatory stream of consciousness, comes the most telling exchange in the book: Dangerfield, having privately decided that he’s “a mortician and too busy to die”, puts a question to his bewildered English wife, a woman on the verge of a nervous breakdown. “Marion,” he asks, “do you ever think of death?” Her response is a simple denial. But Dangerfield is insistent; he rephrases the question: “Marion, do you ever think you’re going to die?” As she is preoccupied with the squalor of her daily existence, she replies, unsurprisingly, “I say, Sebastian, would you mind awfully stopping that sort of talk. You’re in that nasty mood.” He presses on: “I just asked you about death. Want to know how you feel, really get to know you. Or maybe you think this is forever.”

Dangerfield is an unlikely man of action – or, rather, he is a man of unlikely actions: when he needs to escape the police he can run. Considering that it is a fluidly flamboyant comic picaresque, the prevailing mood of The Ginger Man in general, and of Dangerfield in particular, is one of melancholy. He is consummately unhappy, waiting for the money from home that he believes will free him:

“Sebastian passing the cream, smiling and waving his feet from the edge of the bed. Letting his body fall with a squeal of springs and looking at the patches of pink in the ceiling. Marion a bit upset and confused. Difficult for her. She was breaking. Isn’t as strong as me, led a sheltered life. Maybe she shouldn’t have married me. Matter, all of it, of time. Pumping it around and around and around, air in, air out and then it all goes like the shutters of a collapsing house. Starts and ends in antiseptic smell. Like to feel the end would be like closing leaves of honeysuckle, pressing out a last fragrance in the night but that only happens to holy men. Find them in the morning with a smile across the lips and bury them in plain boxes. But I want a rich tomb of Vermont marble in Woodlawn Cemetery, with automatic sprinkler and evergreens . . .” Heart attack It is a wonder that the frenetic Dangerfield does not have a heart attack. But he appears to have the constitution of an elephant. His pal Kenneth O’Keefe sums it all up when he says, “You just sail dream boats. You think because you were born rich you’re going to stay that way.” Dangerfield has been betrayed by the sense of entitlement that is the only thing he knows.

The strength of The Ginger Man rests in Donleavy not having created a tormented artist. Instead he is telling the story, in admittedly graphic detail, of the messy way that one man’s life staggers along. Cheer him on or not – and Dangerfield is terrifying in his chaos – Donleavy is writing about the sort of haunted, fatalistic man who seldom gets written about. A psychiatrist would probably suggest that Dangerfield may be suffering from post-traumatic stress disorder. Donleavy gives him no excuses. There are no extenuating circumstances. In ways it is an uncensored disaster fantasy.

You can’t like Dangerfield, but Donleavy’s treacle-like prose and zany exchanges carry the book, which is easy to read, with interludes of comic flourishes, such as a drunken spree in London, with Dangerfield wearing a kangaroo costume, or when he signs off “in death” to a cheated landlord or, elsewhere, imagines being pursued by the guards, “the whole force on roller skates”.

At times our anti-hero makes it clear he is aware of the horrors, and he refers to the “absence of dignity in our lives” when speaking of his marriage to Chris, a sympathetic young woman who wants far more than Dangerfield could offer anyone.

The Ginger Man remains of its time. The monochrome Dublin of the late 1940s and early 1950s that it evokes is the city about which the poet Anthony Cronin was to write so brilliantly in his memoir, Dead As Doornails (1976).

This new edition comes with a celebrity foreword from Johnny Depp, whose dizzy Captain Jack Sparrow shares Dangerfield’s inventive lying, polished rhetoric and fondness for alcohol. Depp, alas, is now too old to portray him.

As a lively picaresque tale, this novel continues to frolic somewhere between Henry Fielding’s burlesque wonder The History of Tom Jones, a Foundling (1749) and Martin Amis’s virtuoso Money (1984). The Ginger Man also manages to be both American and Irish without being either.

If Dangerfield shares something of the guilt of Joyce’s Stephen and nothing of the appeal of Bloom, he does approach the self-absorbed flamboyance of Buck Mulligan, albeit possessed of a far darker grasp on his reality.

Coming to The Ginger Man as a nerdy 14-year-old who had just read Ulysses for the first time and had loved it – probably missing half of its meaning – I then decided to read Donleavy’s famous novel. I thought it was funny but nowhere near as hilarious as Joyce or one of my other heroes, Flann O’Brien.

Since it was first published, in 1955, The Ginger Man has never been out of print, just like Brian Moore’s outstanding debut, The Lonely Passion of Judith Hearne, an astute and sympathetic portrayal of a female character. In contrast, William Gaddis’s masterpiece The Recognitions, a European novel of ideas confronting truth in art, written by an American, remains lamentably ignored. Donleavy’s holds its place in the canon.

The Ginger Man shares not only its year of publication but also its original publisher, Olympia Press in Paris, with Vladimir Nabokov’s Lolita. Whereas Humbert Humbert is deeply creepy, Sebastian Dangerfield, with his poet’s feel for an image, is a disturbed Everyman who lives equally in hope and fear – as do we all.