The German-American role in fight for Irish freedom

Irish and German Americans found common cause in opposing an Anglophile US foreign policy. Links forged during Boer War grew during WWI and Easter Rising 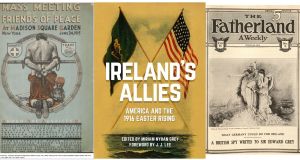 On April 25th, 1916, the New-Yorker Staats-Zeitung published on its front page an article with the headline, “Sir Roger Casement in the Hands of the British: the Irish Patriot Sought to Bring Weapons to Ireland”. Such a headline suggests that the editors not only expected their German speaking readership to recognize Casement’s name, but also to concern themselves with his fate. While it might seem unusual that an ill-fated Irish rebel should occupy such a prominent position on that page, especially when the fatherland from which the German-American diaspora had sprung was at that time engaged in the greatest war the world had ever known, the article was far from aberrant. Casement was by this time well known for his humanitarian efforts in Africa and South America, and had recently spent time openly campaigning in the United States for the cause of German support for Irish independence. His 1916 mission, his arrest, and the subsequent coverage in the German language press in the United States was in actuality only the most recent development in a long struggle for Irish independence in which Germany and German-Americans had played a large role since the dawn of the twentieth century.

Connections between Irish and German-Americans that would play out during the first World War and the Rising were already being forged at the time of the Second Anglo-Boer War when German and Irish-Americans made common cause of protesting what they saw as British cupidity and rapine in southern Africa. Beyond rallies, events and petitions, they were active in procuring money, weapons and recruits for the beleaguered Boers. Though their efforts did not prevent a British victory, Irish nationalists and German-Americans remained in contact in subsequent years and continued to fight against an American foreign policy which they viewed as dangerously Anglocentric. The tactics, rhetoric, and connections forged then emerged again and with greater force as naval disputes between Germany and Britain reached fever pitch and war seemed increasingly likely. At this time John Devoy, the head of Clan na Gael and the editor of the brassiest mouthpiece of Irish revolutionary nationalism in the United States, Gaelic American, explored the possibilities of German support for his long-held revolutionary agenda.

Rallies, events and publications that opposed American entry into the war emerged in great numbers and were supported by Irish and German Americans. Meanwhile organisations like the American Truth Society emerged from this milieu as well. Headed by Jeremiah A O’Leary and other leading Irish nationalists, the society counted among its ranks individuals almost exclusively of Irish and German stock. Their aim was to keep the United States out of the war not only for the benefit of the German war effort, but also, because it was claimed that an alliance with Britain was antithetical to American ideals and inherently damaging for their interests.

It was from this context that Count Johann Heinrich von Bernstorff, the German imperial ambassador to the United States, saw fit to implement a propaganda mission rooted in New York City that would not only attempt to give “fair play” to the German war effort but also promote Irish nationalism and independence. The Irish in America were, after all, lobbying to keep America from joining the allied fight. The disadvantages of the United States joining the allies far outweighed the advantages of a small military distraction for the British in their neighboring island, but von Bernstorff also came to support the latter notion as well.

In the meantime the German propaganda mission sought to influence American opinion through a broad range of activities. They employed sympathetic correspondents in the United States and in Germany, while creating and distributing films, pamphlets and books friendly to their cause. They bought the New York Daily Mail and made overtures to buy other papers that would support their official line. They arranged lecture circuits for pro-German intellectuals; financially supported and organised pacifist and pro-neutrality organisations; disseminated pro-German materials through the German American Alliance and O’Leary’s American Truth Society ; underwrote pro-German publications like The Fatherland, Vital Issue, The International, Fair Play and the New-Yorker Staats-Zeitung; and through these various channels supplied some 500-800 newspapers across the country with information. While these channels supported Irish nationalists, they also principally sought to keep the United States out of the war by influencing the electorate.

From this action also sprang Casement’s mission to Germany, where he hoped to obtain from the Germans arms, officers and an Irish brigade made from Irish-born British soldiers held in Germany as prisoners of war. Casement came to the United States in 1914 to help arm the Irish Volunteers, but while there encountered Devoy and Joseph McGarrity of Philadelphia, another Clan boss, who helped Casement leave the United States for Germany as an emissary of the Clan. Von Bernstorff and his military attaché, Franz von Papen, implored Berlin to accept him, his mission and the nascent plans for the German support in an Irish insurrection.

Though Casement’s efforts in Germany were met with varying degrees of success and failure, the Germans eventually agreed to send a shipment of weapons to Ireland which were secured in large part thanks to the efforts of Joseph Mary Plunkett, a chief military strategist for the IRB. On April 9th, 1916, the Aud set sail from Kiel, Germany, with a cargo of munitions destined for Irish shores, but the Aud’s crew scuttled their ship after being cornered by the British while waiting in a vain attempt to contact the IRB men who were charged with bringing the cargo ashore. Casement, who arrived by submarine, was captured as well. The Irish would not have the Rising that they planned, but the insurrection, now without German support, would commence on Easter Monday nevertheless.

When the Rising commenced, support for the Irish rebels found favourable front-page coverage in the NYSZ for more consecutive days than in any mainstream English language newspaper in the US. This was not only because it was a blow against Britain, but because German-Americans had a long-standing relationship with Irish Americans as well. By this time the NYSZ had been accepting subsidies from the German government but probably would have supported the Rising and denounced the British as murderers all along even without German financial aid. In calling on German-speaking America after the rebel leaders were executed, the paper demanded on May 25th, 1916 “No German and no Austrian and Hungarian should be absent when it is necessary to provide victims of British tyranny with urgently needed aid! One hardly needs to be reminded, that the Irish have always stood with the Germans shoulder to shoulder at all times and on all questions which have become pressing as a consequence of the war.”

At this juncture, many would remember Irish and German-Americans standing “shoulder to shoulder” as far back as the time of the Boer War. The German government’s decision to aid Ireland in their fight against Britain and their moves to support the Rising and Irish-American nationalists in the German language press was thus not predicated solely on post-1914 considerations of the European theatre of war, but stemmed rather from nearly two decades of observing co-operation between the Irish and German diasporas in the United States in their mutual campaigns to prevent what they saw as the Anglicisation of American culture, politics and foreign policy. Though they failed militarily on all fronts, their connections were not a farce, and should not be disregarded or forgotten.

R Bryan Willits is a graduate of New York University and works at the National 9/11 Museum in New York City. This article is based on her chapter in Ireland’s Allies: America and the 1916 Easter Rising, edited by Miriam Nyhan Grey and published by UCD Press