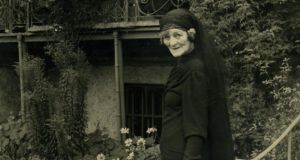 Maud Gonne outside Roebuck House. Photograph courtesy of the Yeats Society of Sligo

It may be trivial, but one has to argue with the title of Adrian Frazier’s ground-breaking study of Maud Gonne. The Adulterous Muse? A muse can hardly be charged with adultery, as she signs no contract and makes no promises. She (or he) can be a muse without even knowing she has been chosen for the role. What Frazier seems to mean by it is that Gonne was an adulterous person in her private life and so by extension betrayed the idealised view of her held by WB Yeats, who fell in love with her as a young man and proposed to her several times, always unsuccessfully. Indeed the matter of her “adultery” is also questionable, as she was unmarried when she had her love affairs, and when she was married, to John MacBride, she appears to have been technically faithful at least.

The title does reflect Frazier’s rather unfriendly attitude towards his subject. This unfriendliness is also shown in his use throughout of “Maud Gonne”, no matter what the context. She is never simply “Maud”. What he has set out to do – and he does it very effectively – is to deconstruct the romantic and glamorous image of the great beauty, great patriot and great love of the great poet that has persisted down to our own time.

That the image has persisted and will probably prevail, despite the scandals that might have overwhelmed it, says a lot about Gonne’s indomitableness, perhaps her primary characteristic. Hugely independent – a trait all the more remarkable considering the constraints under which the “weaker sex” had to live – she was a rare creature. She was 6ft 5in tall, which in itself must have gone a long way in freeing her from those constraints in the eyes of others as well as her own.

The details of her private life, scandalous from the then conventional perspective, are well known and were known in her milieu. In 1897, when she was 22 and was holidaying at Royat, a fashionable French spa, she met Lucien Millevoye. He was 37, a right-wing republican politician and journalist, and already had a wife and son. She was single, and wealthy since the death of her beloved and unconventional father, who, though he was English, was as taken with the cause of Ireland as she was. As Frazier puts it, a marriage proposal would be impossible for Millevoye, but he made another kind.

They would form an alliance in which they would work together against England, she for the cause of Ireland and he for Alsace-Lorraine’s. They also became lovers and in the 10 years of their relationship would have two children. Frazier adds little, a great deal of circumstantial detail aside, to these basic facts.

What he is interested in is Gonne as an immoral woman, a deceiver and manipulator of men, most notably the romantic and inexperienced Willie Yeats. He is also highly critical of her claim to be Irish when she wasn’t, and of her political views in general, and implicitly critical of her as a mother and as wife to John MacBride.

Perusing the popular French newspapers of the day, now available online, Frazier found thousands of references to Gonne. They display her celebrity in France in the 1890s as the Irish beauty who made incitatory speeches far and wide about the perfidious English, the common enemy. Some of these journals purveyed “corridor gossip”, as she herself put it, and Millevoye’s significance in her life was not lost on them – and added colour to their insinuatory reports.

Having read so much of this style of reportage – a comparison today might be the tabloid press – Frazier, inevitably perhaps, is influenced by it, which gives a tinge to his own style that seems a bit retrograde. One consequence is that he gives his Gonne no rope whatsoever. He has little sympathy for her as a woman who was brave enough to live her life as she wanted to live it, nor as an orphaned 22-year-old who fell in love with the wrong man. (She certainly had a habit of falling for the wrong men.) His interest in when and where and with whom she engaged in “intimacy” lends a somewhat prurient note. And although Yeats is cheered on when he finally makes it with Olivia Shakespear – a married woman – Gonne gets no such compassion.

Given his sources, Frazier has a lot to tell about the machinations of French parliamentary politics in the 1890s, Millevoye’s role in various right-wing conspiracies, and the politically louche company Gonne kept. For those curious about figures such as Georges Boulanger, Clovis Hugues, Georges Clemenceau and Paul Déroulède, The Adulterous Muse will be a great read.

Disappointingly, though, there is hardly any information about what was going on in Ireland at the time, which is what Gonne was primarily concerned with. The first cause of several not exactly glamourous causes that she took up was that of evictions in Co Donegal and elsewhere during the land war, and the brutalities that accompanied them. In France she was famous for her impassioned and eloquent speeches on the subject. Frazier duly gives some of them here.

The impression he gives, though, is that she was an embellisher and exaggerator of the facts and a scheming puller at heart-strings – indeed, she shouldn’t have been making these speeches at all. A look at what actually did take place at some evictions she witnessed might have been useful to substantiate his inferences. There will be readers who will object to Frazier’s rather stuffy distrust and disapproval of Maud Gonne for what he sees as her many transgressions. As a disenchanted view of a woman whom so many found enchanting it must also be welcomed.