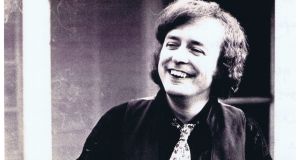 Stewart Parker: one of twentieth-century Ireland’s wittiest and most theatrical dramatists

I remember vividly the cold, wet night in 1989 that I became a Stewart Parker devotee. I was a postgraduate student at Oxford University, working on a master’s thesis about the Field Day theatre company. This was my initial research trip to Belfast, and I had recently heard of Parker for the first time in connection with Field Day, which had premiered his final play, Pentecost. He was still no more than a name to me.

Parker, who had died the previous year, was well known to readers of The Irish Times by then, both as an influential popular music critic (this paper’s first) and as one of twentieth-century Ireland’s wittiest and most theatrical dramatists. I knew nothing of this.

I dragged myself to a Lyric Theatre production of his 1975 play Spokesong with a terrible cold and a sense of obligation, hardly expecting enjoyment from a play set in Northern Ireland at the height of the Troubles. Instead, as Parker had intended, I had one of the best theatrical experiences of my life, surprised and delighted by his deployment of songs, trick cycling and vertiginous time-shifts to make a hilarious but ultimately serious comment about individual responsibility for communal conflict.

I knew that night what my own next project would be, and I began work on Parker’s biography while my Field Day book was still in press. I did not realise then that I had embarked on a quest that would absorb me for the next 20 years. I followed in Parker’s footsteps and tracked down people who had known him at every stage of his life. Many of his friends became mine, too, and his thoughts and words shaped me. Oxford University Press published Stewart Parker: A Life in 2012, and it seemed that my work was done. In reality, though, I remained haunted by a sense of incompletion.

As an undergraduate at Queen’s University Belfast, Parker had been diagnosed with a rare form of bone cancer, and his left leg was amputated above the knee on May 17th, 1961. In the immediate aftermath of this surgery and the lengthy recovery following it, the 19-year-old strove to convey the impression that losing his leg presented only a minor inconvenience to him, resuming his old activities as quickly as possible and repressing his knowledge that the cancer could recur.

The suppressed fear dogged him, though, and in his early thirties he treated his adolescent trauma in fictional form in an effort to come to terms with the experience – fixing his memories of that period in prose, partly to preserve them and partly to exorcise them.

Parker made no attempt to publish the resulting novel in the 1970s, being focused at the time on his budding career as a playwright. He put it away, satisfied that it had served a “therapeutic” purpose for him, but he never forgot the piece and always intended to return to it some day. A sense of urgency about the project descended on him with a new cancer diagnosis in 1988, and he was working frantically on it at the time of his death mere weeks after his 47th birthday.

I first read Hopdance in 1994 as part of my research for the biography – it was, after all, the only existing record of Parker’s private thoughts and feelings during the most formative year of his life – and had drawn on it extensively in writing the relevant chapter of my study. I knew, though, that it had literary as well as autobiographical value, and it saddened me to think that only a handful of people had ever had the opportunity to read it.

I asked his executor, Lesley Bruce, for permission to prepare the manuscript for publication and was thrilled when she agreed. Now, at last, the Lilliput Press has published my edition of Hopdance, making this extraordinary book available to a wide readership for the first time.

Parker himself considered Hopdance unfinished, and leaving it that way was one of his biggest regrets. He had actually completed a version of the novel in 1973, though, before setting it aside indefinitely.

When he returned to it nearly a decade later, Parker had resolved to add several scenes, making more prominent a theme implicit in the original: his protagonist’s growing awareness of his vocation as a writer. He completed only some of these, and he never managed to type and revise the entire novel. Upon Parker’s death, Hopdance consisted of a few sequences of scenes typed at various times, the remaining scenes (most of them) still in manuscript, and handwritten notes regarding the order in which these vignettes should appear.

The structure of Hopdance, however, is both non-chronological and episodic, which makes gaps an integral part of the narrative. It thus seemed to me that, even missing some of the scenes Parker had wished to include, it should be possible to produce a coherent text of it.

I began by transcribing all the scenes Parker had written, ordering them according to his final plan for the novel. Because Parker had changed his mind about the order of the scenes numerous times during the protracted composition process, I decided to include several appendices illustrating the development of the text, and an introduction explaining its history and my procedures as editor. Mary Grace Elliott, my research assistant, helped me to check successive versions of the edited text, with the aim of rendering Parker’s prose as faithfully as possible.

Hopdance sheds light on Parker’s characteristic preoccupations as a playwright and poet as well as meriting attention in its own right as part of a great Irish tradition of autobiographical fiction. A defining example of this literary genre is, of course, James Joyce’s A Portrait of the Artist as a Young Man, and Hopdance demonstrates Parker’s debt to Joyce, his idol – not least in its unsparing treatment of his protagonist and alter ego, Tosh.

Throughout Hopdance, Tosh (who remains, after all, a young man at its close) moons after a succession of unattainable women while treating his girlfriend, Prudence, with dismissive impatience. As a consequence of the amputation, however, he gradually comes to recognise the mortality which he shares with all human beings and which renders trivial the differences people use to divide themselves from one another.

Sitting in the waiting-room of the limb-fitting centre where he has gone to collect his artificial leg, Tosh surveys his fellow clients, “fascinated by how their appearances from the waist up, including his own, proclaimed an almost caricatured identity: whilst from the waist down, they were equally trouserless, each with one whole white and hairy leg and one longer or shorter stump of its fellow” and reflects that “We make a right spectacle. For cartoonists of the human condition.”

Nearly 30 years after Parker’s premature death, Hopdance gives readers a chance to experience, as I once did, the shock of an unexpected encounter with the vision of this penetrating chronicler of human nature.
Marilynn Richtarik is a Professor of English at Georgia State University in Atlanta, Georgia, based at Queen’s University Belfast this semester as a US Fulbright Scholar. Her biography, Stewart Parker: A Life, was published in 2012 by Oxford University Press. Hopdance (€12, Lilliput Press) will have its official launch on May 12th, 6pm, at The Workman’s Club (10 Wellington Quay, Dublin 2). Stephen Rea will be reading from the novel. The event is free and open to the public