Moroccan author Leila Slimani has taken a bold step in writing about a bored woman addicted to sex at a time when publishers in the region expect her to ‘describe sand dunes and camels’, and women's sexuality is an explosive topic in her country and the wider Muslim world 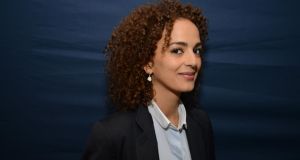 “One must not write what is expected. It’s important for north African writers to show they have other things to say.” Leila Slimani, whose novel In the Garden of the Ogre has just won the Prix La Mamounia literary prize in Morocco. Photograph: C Hélie Gallimard

In the most shocking scene of Leila Slimani’s In the Garden of the Ogre, the main character, Adèle wakes up with her face in an ashtray, crawls on all fours to vomit in the toilet, and eventually makes it to the shower where she realises her genitals are bruised and bleeding.

The previous evening, Adèle, an attractive, middle-class Parisian, put on her makeup while waiting for Mehdi and Antoine, the “escort boys” she’d contacted through the internet.

“Just because you pay doesn’t mean you should let yourself go,” she tells herself. After an hour of cocaine and champagne-fuelled sex, she asks Mehdi to hurt her. At the beginning, he is careful. “Then he started to like it, seeing her twist and turn, hearing her inhuman cries.”

In the opening scene of the novel, Adèle studies men in the metro car on her way to work, thinking of each that “he would do”. She finds the address of a sometime partner in the white mobile phone she keeps secret from her husband, goes to his apartment for sex and then to the office. A seemingly interminable series of sexual encounters ensue. They are never titillating, aways sordid and joyless. Adèle is addicted to sex.

In the Garden of the Ogre has just won the Prix La Mamounia; the literary award considered the Moroccan equivalent of the French Prix Goncourt. “It’s the dark story of Adèle’s double life as a sex addict, constantly cheating on her husband, though not for pleasure,” Slimani explains at the award ceremony. “She loses control of her life. This is a book about addiction; a book that asks if love can survive betrayal.”

Slimani tells me how she chose the theme. “In May 2011, I had just given birth to my son. I watched television when I was nursing him at night and that’s how I learned that Dominique Strauss-Kahn had been arrested in New York. All the newspapers published articles about sex addiction, as if it were a new disease. But none of them were about women. I read psychiatric books and went on internet chat sites where sex addicts tell each other about their suffering, like drug addicts or alcoholics.”

Slimani’s novel was a brave choice for the international panel of judges. Slimani (34) is married to a French banker, lives in Paris and is published by Gallimard, France’s most prestigious publisher. In the Garden of the Ogre somehow slipped passed Moroccan censors, but it’s a safe bet no Moroccan publisher would have dared print it.

Other finalists adopted more traditional themes such as nostalgia for one’s country of origin, identity and the rise of radical Islam. The 2014 winner, Reda Dalil’s Le Job, was about an unemployed Moroccan who drowns his sorrows while his best friend, who has also lost his job, moves to Saudi Arabia to become a radical imam. The 2013 laureate, Rachid O’s Illiterates, addressed the persecution of homosexuals, another frequent theme in Moroccan literature.

Slimani is the first woman to win the Prix La Mamounia. “No man would have dared write what she did. It’s an extraordinary first novel,” says Alain Mabanckou, the award-winning Congolese writer and a member of the jury.

The Irish-American novelist Douglas Kennedy – the best-selling English language writer in France – is also a La Mamounia judge. “The modern novel started with Flaubert’s Madame Bovary,” Kennedy notes. “Is this a modern Madame Bovary? The style is very clinical, void of moralising. It’s also about the mortal boredom of the quotidian, about nihilism and the need for danger.”

Like Emma Bovary, Adèle is married to a doctor, has a male child and ends up in Normandy. The beautiful house purchased by her husband is her prison. “Sometimes she looks like a crazed bird, knocking its beak against the window panes, breaking its wings on the door knobs,” Slimani writes.

Like most of the Moroccan elite, Slimani was educated in French. She has no qualms about writing in the language of the former colonisers. “I am not patriotic or nationalistic,” she says. “But the French language is like a country where I take refuge when I have nowhere else to go. It consoles me for everything. For me, the language no longer belongs to the colonialists.”

Mabanckou says publishers seem to think north African writers should “describe sand dunes and camels”. Slimani was determined to break that mould. “Authors have a nationality; books do not,” she says. “The choice I made was almost political. I too am interested in identity and Islam, which is what people expect of us. But one must not write what is expected. It’s important for north African writers to show they have other things to say.”

Sex is perhaps the most explosive topic in present-day Morocco. Slimani’s second book will be an illustrated text about the sexuality of Moroccan women, based on interviews she has conducted. Several cartoonists backed out of the project after being threatened.

Much Loved, a film by the Moroccan director Nabil Ayouch, has just opened in French cinemas. The story of four prostitutes in Marrakech was banned by the Moroccan government when it was shown in Cannes for “grave outrage to moral values and Moroccan women and a flagrant attack on the image of the kingdom”.

“It shows how polarising sexuality is in Morocco,” says Slimani, who has made Ayouch a character in her next book. She quotes the Turkish writer Zülf Livaneli: “All the misfortunes of the Mediterranean come from the fact that honour reposes between a woman’s legs.”

Slimani deplores what she calls the sexual poverty of Muslim countries. “When you deprive a young person of their sexuality, you alienate them. The right to sexuality is fundamental. In Morocco, all sex outside marriage is punishable by prison. Homosexuality and abortion are illegal. A child whose mother is not married can never carry a family name and legally does not exist.”

Slimani recalls the case of Amina Filali, a 16-year-old Moroccan girl who took her own life by eating rat poison three years ago because she was being forced to marry the man who had raped her.

Morocco has seen less Islamist violence than other Arab states, though attacks in Casablanca in 2003 and Marrakech in 2011 killed 45 and 17 people respectively. Dalil, the 2014 prize winner, spoke of the “Moroccan exception” created by King Mohamed VI’s status as “commander of the faithful”.

Imane Robelin, a finalist this year, said she does not want to write about jihadism “because people already talk far too much about it, and I want to convey a peaceful image of Islam”.

Could these Moroccan writers, most of whom live abroad, be ignoring the most important issue facing the Arab world? Slimani places great hope in a new generation of Arab feminists, including herself, the Egyptian writer Mona Eltahawy and the Lebanese journalist Joumana Haddad.

Slimani admits that her way of thinking and the ideology of Islamic State are “two absolutely irreconcilable faces of the Arab world”. Which side will win? I ask her. “I don’t know,” she replies.

La Mamounia: Patron of the arts, refuge for the wealthy

Since its foundation in 1923, La Mamounia has been a favourite refuge for the rich and famous. The hotel is suffused with scents of amber, cedar and sandalwood. Rooms are decorated with marble columns, sculpted wooden ceilings and Ali Baba lamps. It recently won the “Best Hotel in the World Readers Choice Award” from Condé Nast Traveller.

It also nurtures a reputation as a patron of the arts, and sponsors the Prix La Mamounia, which is awarded by a panel of seven international judges to a Moroccan author writing in French. The award is now in its sixth year.

The hotel’s library has art books on Matisse and Delacroix in Morocco. Winston Churchill wintered at La Mamounia, which he described to Franklin D Roosevelt in 1943 as one of the loveliest spots on earth. The 17-acre garden is hundreds of years old. In alleys of tall, knotted olive trees, coconut palms and rose hedges, one hears only birdsong. The garden was a gift from the 18th century Sultan Sidi Mohammmed Ben Abdallah to his son Mamoun, hence the name of the hotel.