Between the jigs and the reels, says Mícheál Ó Súilleabháin, this is a skilful, sustained trawl through traditional music’s evolution 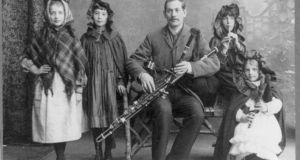 In a way, Martin Dowling’s book begins and ends with himself, but in an admirable way, like the classic 32-bar round of Irish traditional dance music itself. His ending is itself classic: “I hope that such awareness [of the way traditional music has developed] will also set musicians free from the politics and history that often constrain artistic practices, so that when the opportunities come, they can seize the moment and express themselves authentically.” As a primary perspective on history, that is spoken like a true creative artist.

Dowling begins with a description of how he ended up meeting this music head on, not just as an emerging performer but also as an academic who has come to the debate from training as an economic historian rather than as the more usual ethnomusicologist. While he muses that this might not have been “a savvy career plan”, for the rest of us it must be one of the happy sideways moves that have positioned him to make the unique contribution that this book represents.

Traditional Music and Irish Society: Historical Perspectives immediately begins to warm up in the opening chapter, on “18th-century inheritance”, when Daniel Corkery’s “hidden Ireland” – or “hiding Ireland”, as Dowling nicely has it elsewhere – begins to surface and sound, and in the process clears a way for further research.

Turning then to “foundations of a modern tradition”, he takes us through the 19th century with an ever-increasing amount of references to the social context of the music and the dancing, shot through with his own take on Irish economic history – the first time such a viewpoint has been skilfully brought into use to throw further light on the continually emerging tradition. The inherited culture of Jacobitism goes underground to provide a fertile ground for revolt – “a corrosive, subversive idiom which could transcend its particular origins and through which later happenings could be mediated” (Breandán Ó Buachalla). Any of us who have experienced the singing of Mo Ghile Mear by Cór Chúil Aodha in our time or who have performed or sung it ourselves know that that idiom still lives.

Turning to the Gaelic League, the Feis Ceoil and the Celtic Revival, his chapter on music in the revival focuses on the debate around the absence of a national Irish composer. Tracing some fascinating commentary from early 20th-century music activists in the Gaelic League, Feis Ceoil and elsewhere (Annie Patterson, Arthur Darley, Charles Villiers Standford and others), the inability of the musical establishment to take the musician with the music (“the absurd notion that our standard of art and our theories of progress are to be fixed by the views and practice of the itinerant musician when caught wild”, as Brendan Rogers said in An Irish School of Music in 1900) leads to an almost hopeless mixture of cross-ideologies. Patterson (in 1914) at one point starts to hear an embryonic sonata form in Irish traditional tunes: “In all variants, however, we note the underlying construction of principle theme, middle phrase, and ‘repetition’ (cadential) period – that sonata form in embryo which demonstrates the innate artistic sense of the native Irish musicians for sequence and symmetry in melody.”

George Bernard Shaw along with Richard Henebry at the time threw some interesting cross-currents into the mix, but it fell to the Irish collector and songwriter Herbert Hughes (author of My Lagan Love and She Moved Through the Fair) to hit the start of a turning point in a letter to the Free State minister for education Eoin MacNeill in 1925: “In my view the publishing of Irish music is of secondary importance only; it is the living tradition which must be maintained, and it can only be done well by avoiding any compromise whatever with printed books. It follows that we may therefore have to look for experts among the ‘illiterate’ peasants.”

It is from findings such as this – in the Eoin MacNeill papers at the University College Dublin archive – that Martin Dowling opens out a significant additional perspective on a social movement that continues to place Irish traditional music (and increasingly dance as well) at the forefront of a cultural, educational and political movement that still rises in our own time.

When Dowling turns to James Joyce and traditional song it seems like another book. But he nonetheless turns his subject back into the ongoing debate in Joyce’s Dublin around traditional song and traditional singing. Moore’s Melodies are beginning to run their course as the acceptable face of Irish song, but there are ongoing difficulties accepting the raw bar of the on-the-ground singer. While Joyce is competing to win third place in the 1904 Feis Ceoil solo singing competition (where John McCormack had taken first place the previous year), Patterson seemed to be in increasing hysterics in bridging the gap, as she heard it, between the “purity and perfection” of the received traditional repertoire and the inability of the traditional singers to perform it: “All we would suggest is that native singers would not think it beneath their dignity to gain a little knowledge of theory and vocal production, so that they may, all the more effectively, be able to retain in their purity and perfection what tunes the ancient bards may have bequeathed to remote and rural districts.”

But rising voices are urging another understanding of what is going on, with Heinrich Bewerunge (“We must go to the peasant singer, who has learnt his songs from oral tradition,” and, “to get hold of the secret of Irish traditional singing, we must learn from the Irish singers themselves”) or Carl Hardebeck (the traditional singer “has no business to be dragged onto the concert platform”).

He ends with an almost biblical vox de nube/voice from the cloud metaphor: “The tradition that does speak to us comes like a lightning bolt, from no fixed place, from out of silence and returning to silence, with the very minimum of rational programming.”

For all of the many excellent historical perspectives that the book presents, Martin Dowling brings this current journey to a close with hope-filled references drawn from his own sonic inspiration.

Mícheál Ó Súílleabháin is professor of music and founding director of the Irish World Academy of Music and Dance, at the University of Limerick