Review: John Banville on The Blue Room, by Georges Simenon

A triumph of realistic fiction pared to, and close to, the bone 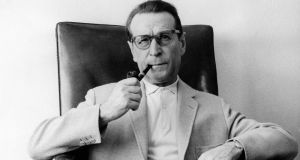 Realistic fiction at its finest conveys such a palpable impression of the world and the things in it that the reader experiences a shivery sense of enforced voyeurism. Georges Simenon could induce this sensation like no other writer of the 20th century, except perhaps Franz Kafka in stories such as The Metamorphosis – which is a masterpiece of realistic writing.

Both Simenon and Kafka force us to press our noses against the world’s window and stare unblinking at things we feel we should not be seeing yet cannot stop looking at. This is especially the case in the non-Maigret books that Simenon called his romans durs, or hard novels. In these works, one of the finest examples of which is The Blue Room, Simenon makes the self-conscious avant-gardism of his time seem so much hysteria.

The blue room of the title is in the Hôtel des Voyageurs in Triant, a nondescript French country town not far from Paris, where for the past year Tony and Andrée have been meeting once a month in a thrillingly illicit love affair. Tony, Antonio Falcone, is the son of Italian parents, the father shiftless and the mother long dead. He has made good, through hard work and cleverness, and is the proprietor of a successful farm-machinery business. He and Andrée were at school together as children, and while Tony had been indifferent to Andrée, partly because she was taller than he, Andrée, we discover, had always loved him, even after they both grew up and married other people.

Simenon is an absolute master of the evocative opening, and the start of The Blue Room is no exception:

‘Are you angry with me?’

It was true. At that time, everything was true, for he was living in the moment, without questioning anything, without trying to understand, without suspecting that one day he would need to understand.

In their love-making Andrée has bitten Tony on the lip and made it bleed. The crimson hue of blood, and the blue of the room – “not just washing-blue, but the sky-blue of certain hot August afternoons as well, shortly before it turns pink, then red, in the setting sun” – and the daylight’s burning gold streaming through a gap in the shutters, make for a marvellously vivid scheme of colours that is at once seductive and ominous.

And, sure enough, within a page or two we are abruptly shifted from the radiant room of the lovers’ idyll to the altogether more sombre surroundings of an examining magistrate’s chambers, where Tony is trying and failing to account for himself to Prof Bigot, a psychiatrist – “short, thin, with red hair and thick, unruly eyebrows” – and his defending lawyer, Maître Demarié. Love, we understand, has taken the course that is usually does in a roman dur.

The immediacy of Simenon’s writing is uncanny. He has a Nabokovian ability to convey in words the tactility of things, although the words that he employs and the sentences he makes of them are always humble and plain. He prided himself on his modest vocabulary and the spareness of his language; having finished a book – which he would do in the space of 10 days or so – he would emerge from his study shaking the finished manuscript by the spine, in order, as he joked, to get rid of the last remaining adjectives.

Like all writers he wrote for himself, but before and after writing he had a lively sense of his audience: he wrote for everyone, and anyone can read him, with ease and full understanding. Not for him the prolixity of Joyce or the exquisite nuances of Henry James. This is what Roland Barthes called “writing degree zero”, cool, controlled and throbbing with passion.

This is not just one writer puffing another, extending an old hand to a younger aspirant. Perhaps there were greater artists among his contemporaries – Samuel Beckett, for instance – but Gide is expressing no more than the truth when he says that Simenon was the greatest novelist of his time, and perhaps of any time.

Most fiction writers, one suspects, find their characters boring, once the excitement of creation has evaporated and the clay has cooled, but Simenon shared with Joyce an inexhaustible fascination with human beings and their feelings, their motives, their infinitely intricate doings. He does not love the people he writes about – love does not, and should not, come into it – but his interest in them never wavers.

Tony and Andrée, and Tony’s poor pale mouse of a wife, and Andrée’s dragon of a mother-in-law, and even Françoise, the maid at the Hôtel des Voyageurs, who is well aware of what goes on in the blue room – she “was about 30 and had been working in cafes or hotels since she was 15, so nothing surprised her” – these are vividly real creatures, and every one of them breathes the breath of life.

Simenon has, too, an extraordinary knack, although it is much more than a knack, of communicating the specificity of place. Here are the lovers, in and out of the throes of passion, “in the hotel room bathed in sunshine, in a heat that seemed alive and breathing”, absorbing into themselves and mingling with the sounds of the world roundabout:

A little earlier, while they were both lost in wild lovemaking, those sounds had reached them and become one with their bodies, saliva, sweat, the whiteness of Andrée’s belly, the darker tone of his own skin, the blue of the walls, the diamond-shaped sunbeam cutting the room in two, a shifting reflection in the mirror and the odours of the hotel, which still smelled of the countryside – of the wine and spirits served in the main room, the ragout simmering in the kitchen, even the slightly musty fibre stuffing of the mattress.

Who but one of the truly great would think of and bother to mention that fibre stuffing?

As if all this were not lavish talent enough, Simenon was also one of the supreme storytellers. His novels are never long – most of them are, in length, hardly more than novellas – but the compass of each one of them is vast. His variety never flagged, and nor did his powers of invention.

His biographer Patrick Marnham says that he wrote 193 novels in his own name and more than 200 under no fewer than 18 pseudonyms, while sales were said to be more than 500 million copies in 55 languages.

Nor did this prodigious level of work exhaust his energies: famously, he claimed to have slept with 10,000 women, although his wife dismissed the figure, saying it could not have been more than 1,200.

In The Blue Room two of the women turn out to be murderous harpies. As the book progresses toward its frightful conclusion Andrée herself becomes transformed into a single-minded maenad, drunk on love and violence and vengeance. Here she is at the close, after she and Tony have been sentenced for crimes of which poor Tony is innocent:

Never, even when they had been the most closely united in one flesh, had he seen her so radiant and beautiful. Never had her voluptuous mouth smiled at him as it did now, in the triumph of love. Never, with one look, had she possessed him so completely.

The Blue Room is a wondrous achievement, brief, inexorable, pared to, and agonisingly close to, the bone, and utterly compelling; in short, a true and luminous work of art.