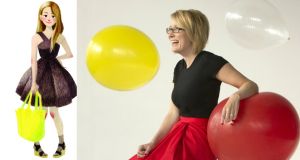 Cinderella, drawn by Genevieve Godbout, the subject of Laura Mucha’s winning poem: “I love writing poetry for children,” Mucha said, “and believe it’s one of the best ways of getting young people interested in language, reading and performance”

The winner of this year’s Caterpillar Poetry Prize – run by the same duo who publish the art and literature magazine the Moth and the €10,000 Ballymaloe International Poetry Prize – is Laura Mucha, for her poem written in the form of a parting note from Cinderella to her “Dear Ugly Sisters”.

“This one caught us off guard,” said Will Govan, the Caterpillar’s publisher. “It made us laugh out loud. It’s very witty, but it’s also written with a deftness of touch that makes it seem like it must have been easy to write. And that in itself is quite an achievement.”

Mucha, who is 33 and lives in London, worked as a face painter, studied flying trapeze and swam in Antarctica before becoming a lawyer. She relishes creating stories, characters and images for children, particularly when set to strict metre and rhyme. Over the last few years her poetry for children has been featured in a variety of magazines and anthologies (including the Caterpillar).

The Caterpillar, which features poems, stories and art for children aged seven to 11, was started in 2013. “We asked Michael Morpurgo to contribute a story to the first issue,” said co-publisher Rebecca O’Connor, “and he was delighted to do so, so we knew we were on the right track. Since then we’ve published lots of work by new writers, as well as confirmed favourites like John Hegley and Ian Whybrow.”

The Caterpillar Poetry Prize – which consists of €1,000 and publication in the Caterpillar – was launched last year and certainly proved invaluable to the inaugural winner, Louise Greig, who clinched a publishing deal as a direct result of her winning poem being read in The Irish Times.

“I love writing poetry for children,” Mucha said, “and believe it’s one of the best ways of getting young people interested in language, reading and performance. I think the Caterpillar Poetry Prize is an important award, particularly as there are so few outlets for children’s poets, and it’s a huge honour to have won it.”

Bread has been baked, veggies are chopped,
salt in the pan – floor has been mopped,

skirts have been washed, hoovered the floor,
took out the bins – polished the door,

cleared up the kitchen, cleaned up the sink,
washed all your socks – still really stink,

ironed the laundry, folded the sheets,
serviced the car – here’s the receipt,

dog for a walk, cat to the vet,
married a wonderful prince that I met,

leaving tonight, so good luck with the chores,
I’m leaving my apron and keys by the door.