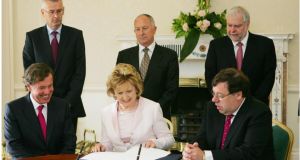 To what extent then does political influence actually govern the choice of judges?

What we want is a system that picks the best judges available and given what judges do and the impact this has on people’s lives there simply has to be a connection between judicial selection and democratic accountability. Yet the legitimate element of democratic expression in judicial appointments cannot be compromised by a perception of abuse by making appointments on a patronage basis.

We know this can be achieved – New Zealand has the strongest, most independent judiciary in the world (World Economic Forum Global Competitiveness Reports 2013-14, 2014-15, 2015-16) and its judges are chosen entirely by thegovernment of the day.

In Ireland we have a system that can offer an equally good outcome. Our system is based on a statutory framework for external screening of judicial candidates by the board, combined with a reasonable level of political involvement in choosing judges.

Unfortunately, over the 20 years of its operation, the advisory board did not use the range of powers given to it to assess judicial candidates, was not provided with sufficient secretarial or professional supports and suffered from a substantial absence of process and Oireachtas oversight.

In addition to this, the board made a surprising, and rather crippling, change of strategy when, at its own behest in the early 2000s, it decided to change its process for recommending judges. Instead of performing a careful selection that would recommend the seven (or fewer) most suitable and very best candidates as provided in law, the board decided it would in the future simply approve all applicants deemed not to be explicitly “unsuitable” for judicial appointment. In effect, this removed the opportunity for carefully weighted external analysis of judicial candidates. The number of names recommended to government increased substantially from about seven to roughly 20, 50 or 100 names for a High Court, Circuit Court or District Court vacancy respectively.

There is a delicate balance to strike. Politics has to be involved in judicial appointments, but we don’t want to see it abused by a series of appointments perceived to be based on party political links and not merit. The external analysis that was to be performed by the advisory board was designed to offer some constraint on government discretion lest the system be so abused. When the board changed its strategy, it made it very easy for governments to find personal or political allies on the list of recommended names, but now with full political cover for all appointments because they were on the advisory board’s list.

In fact what has turned out to be more important in Irish judicial appointments is personal, rather than political, connections in the selection of judges. Both on the advisory board and in Cabinet, decision-makers tend to promote those whom they know through personal or professional networks, because they feel they can attest to their ability, personality and temperament.

In a study of the internal Cabinet politics and processes of judicial appointment in Ireland over three decades (1982-2015) one Minister for Justice commented: “The truth is it’s a small community in Ireland – professional groups are even smaller and you don’t have to go very far before you meet someone you know. Human nature being what it is, you are more comfortable appointing someone you know than you don’t know.”

This research is based on 40 interviews with senior judges, current and former politicians, Attorneys-General and members of the advisory.

The judiciary is a law-making political institution, making decisions that can have profound implications for people’s lives and for the governance of the state itself. Because of that power, it is essential that there be some measure of democratic participation in the selection of judges. In order to govern the people there must be some link with those people at the time of the selection of judges.

Ruling out the direct election and re-election of judges (as occurs in many states in the United States) as compromising judicial independence and judicial behaviour, that leaves us with indirect democratic participation, ie the selection of judges by elected people. Judiciaries cannot be self-selecting and uphold, with legitimacy, the constitutional governance of the State. A self-recruiting judiciary or a judiciary recruited entirely by electorally unaccountable committees misses this vital link with the people.

Significant process improvements are urgently required to enable the advisory board to function optimally. Political energy should now be devoted to ensuring the board works in the way it was designed. Instead of concentrating on that, and in an misplaced effort to remove elected representatives from judicial selection, there is a commitment in the current Programme for Government to reduce as far as constitutionally possible the number of names of candidates from which Government can choose judges. There is no good reason to do this. The Government should focus on what will improve the quality of decision making about judges and minimise concerns about people being appointed other than on merit. What is needed is robust professional assessment processes performed by the advisory board and supported by the Public Appointment Service, involving expert screening, interviews and practical assessments of judicial candidates.

Ireland is a stable constitutional democracy with very high levels of judicial independence. Far from the threat to judicial independence or the “stability of the State” as argued by some commentators, Ireland’s current system for judicial selection, as designed in statute, offers a good model for combining the best of external screening whilst leaving sufficient discretion to politicians to make decisions about who should be a judge.

Politicians, as our chosen representatives, should be free to make some political decisions in relation to courts – for example, that there are not enough women judges or a need for more judges with family law experience or judges from a particular religious or ethnic background so as to be more reflective of society. The reality is that political involvement in recruitment of judges is not just desirable, but a constitutional and democratic imperative.

The Politics of Judicial Selection in Ireland by Dr Jennifer Carroll MacNeill is published by Four Courts Press on May 27th. She is a former adviser to ministers Frances Fitzgerald and Alan Shatter, a former legal adviser in the Office of the Leader of Fine Gael and the winner of the Basil Chubb Prize 2015 to recognise the best politics PhD in Ireland