Orwellian ebooks may be revealing more than we realise

Although the Kindle highlights function is publicly anonymous, there are still serious privacy concerns as it allows Amazon to track and store the reading statistics of customers 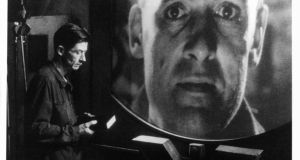 John Hurt holds a book in a scene from the film, 1984. Photograph: Atlantic Releasing Corporation/Getty Images

‘The book fascinated him, or more exactly it reassured him. In a sense it told him nothing that was new, but that was part of the attraction. It said what he would have said, if it had been possible for him to set his scattered thoughts in order. It was the product of a mind similar to his own, but enormously more powerful, more systematic, less fear-ridden.”

Winston Smith’s description of reading in the totalitarian world of 1984 may be satirical, but there’s also some truth to it. We know the feeling of identifying with a book. It is one of the most satisfying aspects of reading, when a character says or does something that we ourselves think but are unable to articulate so eloquently or with an image that really expresses the sentiment.

Reading 1984 as a traditional book, I might have reached for a pen to underline that quotation. Reading it as an ebook, I have access to an enhanced version of this highlighting process. Since Amazon launched its Kindle Popular Highlights, in 2010, readers have been able to leave their own stamp on their favourite ebooks and can publicly share their insights if they want to. Tracking the scattered thoughts and similar minds of readers around the world, Amazon also gives its Kindle customers the option of viewing the most popular highlights of whatever book they’re reading.

At the heart of highlighting is the human urge to participate and document, to interact with a text at the most basic level, like a child pointing to something that has grabbed their attention. Readers may not return to their highlight, may never again think about that particular quotation or passage, but they have for an instant engaged. Ripping out newspaper articles, writing Post-its, scribbling on envelopes, marking cave walls with berries: the desire to record is age-old. The highlighting and notebook facilities on ereaders make it easy, storing ideas, half ideas, future ideas, even terrible ideas in one orderly, accessible location.

All the major ereaders have some variation of these functions. Like a modern commonplace book, the Clippings section in a Kindle or other device is a way to collect nuggets of information from a variety of sources. It is particularly useful as a tool for writers and other literary magpies. If bad writers borrow and good writers steal, ereaders make for excellent accessories to the crime. Users can rifle the world’s biggest vault and store the loot in a safety deposit box that never gets full.

From Milton to Locke to EM Forster, writers have kept scrapbooks of knowledge. WH Auden considered his commonplace book of quotations, A Certain World, as the nearest he would get to autobiography. It was, he said, “a map of my planet”. In years to come, readers may well look back on their eclippings for similar threads and patterns. It is an interesting question: what do our highlights and preoccupations tell us about ourselves at a particular point in time?

Viewed by some as an Orwellian invention that undermines a private pastime, digital highlighting is used by an army of interactive readers all over the world. On Kindle devices it is a straightforward application, carried out with a few clicks, the inbuilt nature of it meaning less distraction from the text itself. This was easier to do on the now retired Kindle Keyboard device, which had a button keyboard beneath the screen. Later models have a variety of onscreen or touchscreen keypads, some of which can be time-consuming and awkward to use.

Awkward or not, Kindle users choose to annotate millions of book passages every year, according to Amazon’s Popular Highlights website. Every time this happens the device informs the company, which then combines the highlights of all users to identify the most popular passages. For those of Orwellian persuasion, this is all a bit Minitrue, as is the newspeak blurb promoting the initiative: “Popular Highlights help readers to focus on passages that are meaningful to the greatest number of people. We show only passages where the highlights of at least three distinct customers overlap, and we do not show which customers made those highlights.”

Although the highlights remain publicly anonymous, there are still serious privacy concerns with this system, as it allows Amazon to track and store the reading statistics of individual customers. At the end of the day, the primary goal of Amazon, lover of all things data, is not to promote literacy but to collect as much information as possible about its customers in order to turn a profit.

The “meaningful” aspect of the highlights section is debatable. The top 25 most highlighted passages of all time make for depressing reading. Quotations from the works of Arthur Conan Doyle, Oscar Wilde and Jane Austen feature, but they are lost amid the 17 passages from Suzanne Collins’s The Hunger Games trilogy that dominate the listing. Most of these are far from compelling, such as the number-one quote, from Catching Fire: “Because sometimes things happen to people and they’re not equipped to deal with them.”

The authenticity of the selections can also be questioned. Once a certain line is shown to be highlight worthy, it will likely attract other readers to follow suit. Are readers highlighting a quote because it appealed to them or because it appealed to others? Is this cacophony of ghost readers, as related by one commercial giant, telling us or helping us to see what’s important in a book? There are concerns it is bringing us closer to Winston Smith’s views of reading in Kindle’s 399th most highlighted book of all time: “The best books, he perceived, are those that tell you what you know already.”

The Art of Political Storytelling: Unravelling the spin that put Trump and Johnson in power
Real news has value SUBSCRIBE