Niall MacMonagle on his Irish poetry anthology Windharp: my bunch of flowers

I hope this collection captures something of the country’s people and beliefs, its landscape, passions and politics since 1916. It’s my best attempt to create a One Country One Book poetry collection 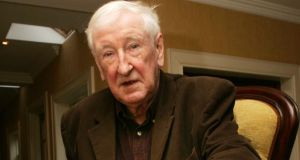 Niall MacMonagle: Windharp: Poems of Ireland Since 1916, the anthology I have just edited, began, without my knowing it, in 1988, when in Cambridge, Massachusetts, I pinned a copy of John Montague’s gloriously evocative, one-sentence lyric poem Windharp above the kitchen sink. Photograph: Cyril Byrne

Etymologically, “anthology” suggests a delightful adventure. It is, after all, the gathering of a bunch of flowers. But, remembering WB Yeats’s introduction to The Oxford Book of Modern Verse, I knew the difficulties ahead. Yeats spoke of authors who refused permission; others were “inadequately represented because too expensive”. Surely TS Eliot was right: there is no competition among poets!

Windharp: Poems of Ireland Since 1916, the anthology I have just edited, began, without my knowing it, in 1988, when in Cambridge, Massachusetts, I pinned a copy of John Montague’s gloriously evocative, one-sentence lyric poem Windharp above the kitchen sink. All year it reminded me of a beautifully empty, far-away Ireland. But it began even earlier: in the Presentation monastery in Killarney, in 1966, when Br Angelus introduced our class of boys in short trousers to a poem written by a man facing execution because he fought for Ireland’s freedom. In an anthology that attempts to tell Ireland’s story through its poems and poets since the momentous events of 1916, Patrick Pearse’s The Wayfarer was the place to begin.

In autumn 2012 I wrote to Seamus Heaney, outlined my project and asked if he would, in addition to the poems of his that I had already chosen, make available an unpublished poem with which to close the book. Within a week he replied that he was “honoured to be invited to contribute a ‘postscript’ ”, that he was “in an Old Mother Hubbard phase”, had “very little in the cupboard, but your invitation stirs the pot, if you’ll excuse a bit of metaphor-mix”. Within a year his big, generous heart had been stilled. There would be no poem, but I felt his blessing on the work. And then, by chance, I met Moya Cannon, and she mentioned her recently completed The Countermanding Order, 1916, which was published earlier this year in this newpaper. It became Windharp’s final poem and returns the reader to the book’s first poet.

In the end I omitted Freda Laughton and Oliver St John Gogarty; I hesitated between John Hewitt’s Mass or First Corncrake; Enda Wyley’s and Tara Bergin’s different St Patrick’s Day poems spoke to each other; and Katharine Tynan’s The Long Vacation was a discovery, as were Cecil Day-Lewis’s Fishguard to Rosslare, Pat Galvin’s Donnelly’s Hollow, Doireann Ní Ghríofa’s poem about Savita Halappanavar, the memorable Joe Duffy/Liveline poem Old Testament Times, which I first heard Mary Branley read in Sligo, and Joe Kane’s Made in Ireland, which gives voice to a Philippine nurse and her take on the Irish health system. Gabriel Fitzmaurice’s Munster Football Final 1924 tells of how a republican and a Free Stater forgot their differences and played together for Kerry against Clare. Kerry won.

Clearing copyright was nightmarishly slow and expensive. But, like toothache, it’s over. Some poems were so expensive that I was tempted to do the outrageous and bracket in the acknowledgments the sometimes eye-opening fee. One eminent poet wrote to refuse permission. Other poets kindly waived fees. Irish publishers, particularly, were efficient, generous and helpful, although one did ask for €200 for one poem. I had to remove it. Another poem took 14 emails zipping via Dublin, Washington DC and Russia to clear. I had queries and complaints about inclusions, exclusions. An American friend on seeing the cover quilted the image: a happy highlight.

I hope this collection captures something of the country’s people and beliefs, its landscape, passions and politics and the extraordinary changes since 1916. It’s my bunch of flowers, my best attempt to create a One Country One Book poetry collection.

Windharp: Poems of Ireland Since 1916 is published by Penguin Ireland on September 3rd