How Ireland’s first true crime writer went from hawking his own books around Galway pubs, to rubbing shoulders with some of the best crime authors in the world 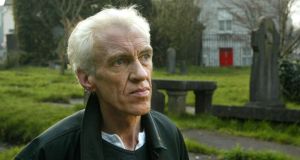 The story has been told before but deserves another airing. One evening, close on 30 years ago for us, herself and myself were in the Galway Arms, a good hostelry at the top of Dominick Street, Galway. There were a few other drinkers at various tables there scattered throughout the pub keeping themselves very much to themselves.

The door opened and a thin, slightly edgy young man walked in carrying a basket of books, one copy of which he left on each occupied table. My first reaction was that he was of a marginal religious or political persuasion and trying to spread the gospel. My second was that it was a question of a charitable donation - probably for himself, God knows he looked like he needed it - and it was best left alone. However my bookseller curiosity got the better of me and I was perusing when he returned.

“Did you write this?”

“Can you call in and see me in the morning?”

“And who the fuck are you?”

“Jaysus, I’ll be there at ten in the morning”.

And he was, making us the first bookshop to officially stock the books of Ken Bruen, Ireland’s first real crime novelist.

Born in Galway in 1951, Bruen is the quintessential Galwegian. He was educated there and at Trinity College Dublin, where he took a doctorate in Metaphysics. His itchy feet took him on a 25-year trip around the world during which he mostly taught English, re-educated himself, and spent six months as the unwilling guest of a caring Brazilian government. Returning to London, he continued to teach English.

When he found himself in a tough East London school trying to teach children poetry in a language they didn’t understand, he began to write crime novels in a language they did, introducing literary figures into the text; hence you have such titles as Her Last Call to Louis Mac Niece and Rilke on Black. Thanks to the vision and money of publisher Jim Driver, these books saw the light of day.

Sadly, Jim was no distributor, and because the books were so much on the edge and raw, the reading public remained largely unaware of them. In an attempt to increase his audience, Bruen hawked the books himself from pub to pub.

When in 2001, Brandon published his 11th book, The Guards - the first Jack Taylor book - Bruen became an overnight success.

Although I had already read Bruen’s previously published books, it was the appearance of The Guards that made me realise that the man I met that fateful evening in the Galway Arms was in fact the Godfather of the modern Irish crime novel. While some crime writing did exist in Ireland up to 2001, it was fairly tame and never really lifted its head above the parapet. In Jack Taylor we have in Irish crime fiction the first really hard- nosed ex-cop who drinks whiskey as if it is going out of fashion, whose sense of dress is non-existent, whose sense of humour is visceral, and whose sense of justice is instinctive, although not exactly administered by the book as he deals with the darker deeds committed on the shadowy streets and lanes of Galway.

Bruen writes in machine gun fashion, his words verbal bullets that rip through the veneer of the safe bourgeois Catholic society in which he was reared, symbolised by Taylor’s over pious mother and her close ally, the meddling sanctimonious Fr Malachy. The acerbic wit and off-the-wall comments throughout all the books are somewhat reminiscent of the work of Raymond Chandler and Peter Cheyenne, both of whom incidentally had Irish ancestry.

Aside from the drink and drugs, however, Taylor has one other rather unusual if not unique addiction for a man of his calling: books. No matter how drunk, or high, or beaten up he is, he always has recourse to his own personal library, and the narrative is peppered with literary allusions and quotes from the works of the great poets and philosophers. Mixed in with the sleaze and the gore, the reader is likely to find quotes from Kahlil Gibran or Thomas Merton.

Now, 14 years after the publication of The Guards, Bruen rubs shoulders with the best crime writers in the world. Ed McBain was an avid fan of his work, and they became close friends. Many of his books have been made into films. “There are seven Jack Taylor movies,” he said to me proudly, “of which I have only seen six”. A script of his is currently being filmed as a series for Scandinavian television, which BBC4 will screen a dubbed version of. He has been the recipient of many crime writer international awards.

Yet for all of that, while he doesn’t hawk the books from pub to pub now, he has never really left Galway. He can still frequently been seen gliding along its streets with the inevitable backpack thrown over his shoulders, almost certainly full of books which he will happily share with anybody who shows a serious interest. “Books are to be passed around,” he says, “not buried on shelves”.

Bruen rejoices in the explosion of crime writer’s in Ireland. “Isn’t it wonderful? There are 763 crime writers working in Ireland at the moment,” he tells me. “isn’t it a great pity though that over 90 per cent of them are only available on Amazon?”

It never occurs to him that his pioneer work in writing and hawking the books around during the 1970s and 1980s is one of the main foundations of and inspirations behind this whole new chapter in Irish literature.