Image of Joyce ‘the most unlikely likeness ever’ 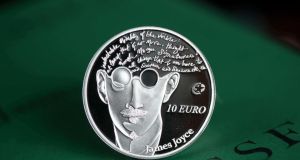 A view of a limited edition James Joyce collector coin issued by the Central Bank.

Stephen James Joyce, grandson of James Joyce, has condemned the commemorative coin for the author issued this week by the Central Bank.

The coin, which sold out yesterday, two days after 10,000 were issued, contains an error in the quotation used from the third episode of Ulysses .

Mr Joyce described the circumstances of the coin’s issuing as “one of the greatest insults to the Joyce family that has ever been perpetrated in Ireland”.

He said the first he heard of it was in a communication last September, but when he attempted to contact the person concerned it turned out he was no longer at the bank. Another brief communication arrived in March, which contained no further information. Had he seen the coin, or an image of it, the error would have been spotted.

Mr Joyce also expressed anger at the image of his grandfather on the coin, describing it as “the most unlikely likeness of Joyce ever produced”. He cited photographs of Joyce taken by photographers such as Gisèle Freund and Berenice Abbott, and asked why these had not been used as models.

A further problem with the coin, for him, was that it was issued on April 10th, the anniversary of the death of his grandmother, Nora Joyce. He described this decision as highly insensitive and offensive.

Mr Joyce said the bank’s behaviour over the coin formed part of a pattern of Irish mistreatment of the memory of James Joyce going back to the failure of the State to send any representative to his grandfather’s funeral in Zurich in 1941.