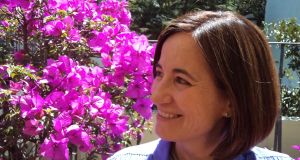 Monica Lavin: I think science and writing have to do with the desire to know. Science deals with objective truth, literature with relative truth. El Quijote taught us that

What made you a fiction writer?

Curiosity, reading, a love for stories, the unknown, and desert turtle excrement.

I was a biologist writing secretly, as a private passion, as an unsharable game. I attended a short story writing workshop while I studied at university. I was two people until I started working as a biologist in the beautiful desert of Northern Mexico. There everything became clear. I was in a biosphere reserve called Bolsón de Mapimí where I was asked to take care of some scientific journalists from other countries, because I spoke English. I realised I was closer to the ‘question spirit’, the nosy attitude of journalists, than the specialisation of my colleagues, some of whom were devoted to the study of the turtle’s bowel content. When I returned to Mexico City I had made up my mind, I was going to be a writer.

Why the love for short story writing?

Because I read wonderful stories as a teenager: Chekhov, Bradbury, Hemingway, Cortazar, Borges, Rulfo. Latin American writers’ books were fresh, the writers were alive. That gave another dimension to what I had read before. When I was a child I thought all writers were dead people. Maybe that is one of the reasons I could not picture myself as one, even though I had been writing stories since I was 13 years old. I did not how to become a writer.

Does your writing have anything to do with your scientific background?

I think science and writing have to do with the desire to know. Science deals with objective truth, literature with relative truth. El Quijote taught us that. The short story aesthetic has more to do with mathematical equations – they have to be balanced: nothing extra, nothing missing. I love the silence of the short story.

Why did you started writing novels?

I always felt there was a question behind each short story – what if...? Now I know it is more than that, and what I thought would be a short story commanded several questions. I was dealing with multidimensional characters, several situations. I was in the grounds of the novel, and I plunged in. Now I write both. Short story writing is a way of thinking, so I always write them. I love the risk of both.

Who are some of your favourite short story writers?

I love the most subtle writers, the kind that spring from Chekhov: Joyce, Carver, Faulkner, Flannery O’Connor, García Márquez. But I am also an admirer of strategy as in Borges or Cortazar. A writer friend introduced me to Mary Lavin, the Irish writer. I loved her short stories, and hope to translate some. My friend made a joke about her being family... the truth is my grandparents come from Cantabria in the north of Spain, so Lavin might be Celtic. Who knows? I do think we share some festive sense of life with which to confront tragedy. Or that is the idea I have.

What is happening in the short story scene in Mexico?

You have been curated a number of short story collections translated into other languages. Can you tell me a little about that?

Short story collections were the way I got to read several writers for the first time. I still remember Ray Bradbury’s The Siren, which fascinated me. I believe a good way to start a conversation between countries and peep into the point of view and artistic proposals of different traditions is the taste of a collection of several authors’ work. I have done that for City Lights in San Francisco, with writers of my generation, an Italian and Mexican version of a dozen writers of each country, an anthology with Panama’s female writers, a collection for young readers in Mexico. I have also translated and co-ordinated editions with Canadian authors, like Barry Callaghan, coincidentally of Irish origin.

Both: they are ways of breathing. One is a wink, suggestion is its strength. Both have a bubbly consequence, they are always more than what they appear to be. They are like effervescent pills. Round, small and white only outside. Wait till they dissolve.

Flash ficiton has a place in Mexico?

Definitely, there is a very interesting corpus of microficition, minicuento or ficción súbita, and other names that specialists have made up. Professors study it, and collections come out. It is hardly the cup of tea of publishers. I love Arreola’s work, his bestiarios are fascinating.

Why will you be in Dublin from October 2nd- 4th?

I am part of the writers invited by the Mexican embassy to the Isla festival co-ordinated by Instituto Cervantes. The theme is memory and oblivion. I will talk about the novel I am writing that deals with the 1985 earthquake in Mexico City. It also refers to Spanish Civil War exile and migration and my origins (I have dealt with them in several short stories and my novel Café Cortado).

It is my first time in Dublin, a literary city which I have always wanted to get to know.

Paul McVeigh is a short story writer and his debut novel The Good Son is currently shortlisted for The Guardian’s Not The Booker Prize. He is also the co-founder of the London Short Story Festival.

Weathering With You: Thrills and humiliations of teenage romance
Real news has value SUBSCRIBE