Is making a living just from writing books a literary fiction?

Most recent survey of Irish authors’ incomes found more than half earned less than €5,000 a year from their writing 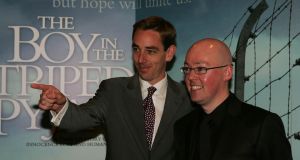 ‘The Boy in the Striped Pyjamas’ has sold about seven million copies. With royalties at roughly €1 a book, says John Boyne, right, with Ryan Tubridy, “you can figure it out from there”. Photograph: Cyril Byrne

Rumour has it that there are only 12 writers in Ireland who can make a living from their books alone.

Of course, the figure changes with the telling – dropping to seven, or rising to 20, perhaps even 30 – and while trying to guess the names of those on this privileged list makes for a good game, I’ve yet to uncover the research on which this supposed statistic is based.

Indeed, it may simply be another piece of literary fiction, an urban myth or a salutary tale to deter those who dream of giving up the 9-5 to earn a living with their pen.

Yet, like all myths, it has its origins in a truism that while there are many professional writers in Ireland, few of them can make a living from books alone.

The most recent survey of Irish authors’ incomes – published by the Irish Copyright Licencing Agency in 2010 – found that in 2008-09 over half the writers consulted (58.7 per cent) earned less than €5,000 from writing-related income. Indeed, the commonest response – given by more than a quarter, or 27.9 per cent of respondents – was that they earned less than €500 a year.

Bearing in mind the age of the study, one might expect writers’ incomes to have risen somewhat in the intervening years; instead, a 2014 UK report indicates that the financial situation for writers has deteriorated.

What Are Words Worth Now?, by the Authors’ Licencing and Collecting Society, found that the percentage of professional authors who earned their income solely from writing had dropped from 40 per cent in 2005 to 11.5 per cent in 2013. Moreover, the average incomes of professional authors had dropped over the same period, from £12,330 (or £15,450 in real terms) to £11,000.

This despite the fact that – according to the Joseph Rowntree Foundation – in 2013 a single person in the UK needed to earn at least £16,850 before tax in order to achieve a minimum standard of living.

Given this reality, it is hardly surprising that the majority of Irish authors surveyed in the ICLA report – 63.1 per cent – had another job, with nearly two-thirds working full-time.

Indeed, the financial pressures on writers appear to be building. The amount of money in the Irish Public Lending Right Scheme, which pays authors for library loans of their books, has fallen, and the decline in the value of sterling following the Brexit referendum will affect the income of Irish writers published in the UK.

In the absence of any significant research, there are also questions to be answered as to the impact of digital publishing on writers’ incomes.

The uncertainty thus engendered chimes with the experiences that writers have shared as part of this Irish Times/Words Ireland series and at the series of meetings which are taking place across the country.

Ruth Hegarty is managing editor at the Royal Irish Academy and president of Publishing Ireland, part of Words Ireland.

“What we’re hearing is that it’s clear that writers are making a living through their pens, but in many different ways. So they might be short story writers, but they might also write screenplays or do a bit of film work or they might be teaching or be a technical writer. They have a portfolio of things they do.

“For most people, it doesn’t seem possible for them to be just a writer and devote themselves entirely to writing – even if that would be the best thing for them.”

So how much does the average Irish writer make?

“In literary fiction, I would say it is more normal for advances to be in the hundreds rather than the thousands of euro,” says Hegarty. “Royalty rates in Ireland are often based on net receipts rather than list price, so if you’re looking at a book that sells for a tenner, the author might expect to get something between 50c and €1.20 for it.

“If you look at the top thousand books sold in Ireland last year, you are doing well to sell somewhere between 1,000 and 2,000 books, so if you multiply that by – for simplicity’s sake – a euro, you’re making between €1,000-€2,000 for your book. If you make that, you’ve done well, and that is more normal than the great big advances.

“But it does become imperative for writers to be either funded in some other way – because it takes years to write a novel – or for them to have opportunities to make money from their writing in ways other than just book sales.”

For writers themselves, it is that increasingly rare object – the advance – which seems to make the greatest financial difference. A number of writers agreed to share the details of their advances with me on the condition that they remained anonymous.

One writer, who received a “six-figure sum” for a three-book deal, admits that “maybe once or twice in 20 years have I received an actual royalty cheque, so I’ve never earned back the money they’ve invested.”

Another author received a “healthy advance” – again as part of a three-book deal – whilst yet another writer, who was published in the UK, received an advance of £5,000, “and whether I get royalties depends on what happens next”.

For most writers, the sum earned through royalties is smaller.

“Royalties from book sales are almost negligible – less than 10 per cent of my income last year,” says one writer. Another admits to earning a few thousand a year from writing, but “mainly from workshops and festivals”.

According to Vanessa Fox O’Loughlin, who runs writing consultancy the Inkwell Group and writes crime fiction as Sam Blake, “everybody should be getting an advance, because no writer should be writing for free”.

“However, Irish advances tend to be quite small, because Irish publishers are restricted in the size of the market and they may have less financial flexibility, so you might find an Irish advance is only €1,000.”

Of course for every rule there is always an exception.

The success of The Boy in the Striped Pyjamas certainly puts John Boyne on my list of Irish authors who can make a living from books alone.

“It’s what everybody hopes to get,” acknowledges Boyne. “In 2005, before it came out, my foreign agents were selling so many deals to different countries that I went from flat broke to a reasonably decent position by the end of that year.”

The Boy in the Striped Pyjamas has sold approximately seven million copies around the world. With royalties at roughly a euro a book, says Boyne, “you can figure it out from there”.

The Irish Times Writing Lives series is an initiative of Words Ireland. The Words Ireland Writers Series of nationwide meetings for creative writers and illustrators continues in Dublin, Wicklow, Cork and Limerick. Admission is free but booking is essential. For more information visit wordsireland.ie

Freya McClements is a writer and arts journalist